As the crisis in Ukraine unfolds, twenty-one states are sending unarmed military observers at Kiev’s request, but pro-Russian forces have thus far blocked their entry into Crimea. These observers fall under the auspices of the Organization for Security and Cooperation in Europe (OSCE), whose roots lie in the improved East-West relations during the Cold War’s détente. The organization helped manage European crises after the Soviet Union’s fall, but has been overshadowed in the years since by the European Union and the North Atlantic Treaty Organization, says expert Richard Gowan. While the organization’s big-tent approach to international cooperation has stymied its reach, "Putin and the West may eventually turn back to the OSCE as the least-bad option," Gowan says. 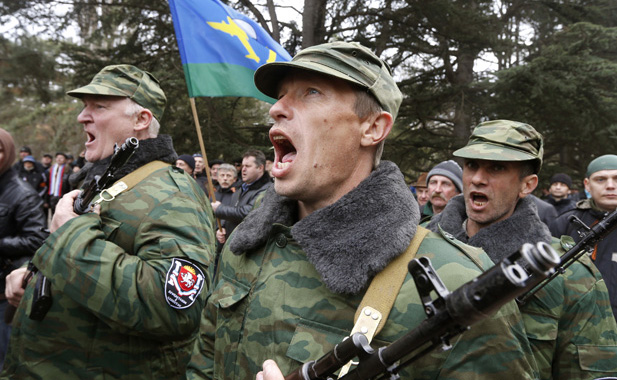 Members of a pro-Russian self-defense unit take an oath to the Crimea government in Simferopol. (Photo: Vasily Fedosenko/Courtesy Reuters)

What role has the OSCE played in post–Cold War European governance?

More From Our Experts
Paul B. Stares
Conflicts to Watch in 2021
Jamille Bigio
Can Biden Make the Military Safe for Those Who Serve?

The OSCE is the perennial also-ran among Europe’s security institutions. It lacks NATO’s military clout and the European Union’s economic resources. Its main strength is that it includes all the countries of Europe and the former Soviet Union, as well as the United States and Canada, but it is often hard to forge consensus among such diverse and sometimes antagonistic members.

The organization was prominent in the 1990s, when it offered a framework for Western and Eastern states to manage the crises that flared up in Europe after the Cold War: it sent peacemaking missions to the former Yugoslavia, Georgia, Moldova, and other trouble spots. It also handled questions such as the status of ethnic Russians in the Baltic states, which had the potential to spark conflict with Moscow. The OSCE had officials in Crimea in the mid-1990s trying to ease tensions between ethnic Russians and Tatars.

Although the OSCE developed expertise on issues such as minority rights and good governance, it began to lose momentum in the early 2000s. In recent years, it has ended up tending to long-standing conflicts, like the one between Armenia and Azerbaijan over Nagorno-Karabakh, rather than taking on new challenges. It still has officials dealing with complex, if low-priority, problems like the future of the Serb minority in Kosovo, but the OSCE as a whole has been weakened by the mounting tensions between Russia and the West.

So the OSCE tends to be an afterthought until one of the half-resolved problems left over from the 1990s, like the status of the Crimea, explodes again and makes it relevant.

More From Our Experts
Paul B. Stares
Conflicts to Watch in 2021
Jamille Bigio
Can Biden Make the Military Safe for Those Who Serve?

What is the OSCE’s relationship to NATO?

The OSCE has some formal liaison mechanisms with NATO, and the organizations have cooperated very closely on the ground in the former Yugoslavia. The OSCE even sent electoral advisers to Afghanistan. But it is a complex political relationship. When the Clinton administration decided to push for NATO’s eastward expansion, former Soviet vassals like Poland and the Czech Republic placed greater value on NATO membership than their place in the OSCE, where Russia maintained some influence.

The same goes for EU-OSCE relations. In many ways the EU and OSCE stand for similar values: freedom of expression, cooperation, and so forth. OSCE officials joke that the EU stole their playbook on matters such as minority rights. But as the EU has expanded eastward, it has also eclipsed the OSCE. Marc Perrin de Brichambaut, a French diplomat and former secretary-general of the OSCE, wrote in 2012 that the OSCE remains a "visible actor" only "east of Vienna," that is, beyond the EU’s boundaries.

Election observers from the OSCE and the Russian-led Commonwealth of Independent States have reached opposite conclusions in previous votes. How does Russia regard the OSCE?

Russia’s relationship with the OSCE is complex at best and tortured at worst. In the 1990s, when Moscow was at its weakest, Russian officials advocated a strong OSCE as an institution where they could parlay with the United States and Western Europeans as equals.

The Clinton administration and its allies were not interested. Instead, Russia believes that the West has exploited the OSCE to sow trouble in former Soviet states, for example by insisting on media freedoms and free elections. A low point, from Moscow’s perspective, was the OSCE’s deployment of a human rights mission to Chechnya from 1995 to 2003, which looked like an affront to Russian sovereignty.

The organization’s independent Office for Democratic Institutions and Human Rights (ODIHR) has also been critical of Russian electoral standards, and Moscow has accused it of "double standards" for failing to scrutinize Western polls in the same way. For a hardliner like President Vladimir Putin, cooperating with the OSCE brings back too many memories of Russia’s decline and supposed ill treatment by the West in the 1990s to be a palatable strategic choice now.

Does that mean the OSCE can’t offer Russia an off-ramp out of the Crimea crisis, as the United States and Germany have suggested?

At the start of the Crimean crisis, the United States may have thought that the OSCE could offer a quick fix. U.S. and European diplomats have suggested that Russian troops could return to barracks while OSCE monitors could offer some safeguards to ethnic Russian civilians in Crimea. But it’s now pretty clear that Putin wants absolute territorial control of Crimea, at a minimum, rather than a 1990s-style minority-rights regime.

This doesn’t mean that the OSCE can’t play a role in de-escalating the crisis, however. Putin’s resolve may weaken if the Russian economy continues to take a beating, or the EU threatens more effective sanctions. If Moscow starts to wilt under this pressure, Putin may look for a way out, probably including a hazy compromise over exactly who owns Crimea. That scenario, should it transpire, will need to be monitored through some sort of institutional framework.

The OSCE is probably best placed to manage such a mechanism if and when it becomes possible. Russia simply can’t accept an EU- or NATO-led political deal out of pride. The UN is a potential alternative, but Western diplomats have learned to their cost vis-à-vis Syria that Russia can exploit its position in the Security Council very effectively. The OSCE also has far more regionally specific knowledge and contacts than the UN. So I think that Putin and the West may eventually turn back to the OSCE as the least bad option.

OSCE observers were initially blocked from entering Crimea; now it’s reported that they’ve been invited by Crimea’s Russia-backed parliament to observe Sunday’s referendum. Why the change of heart?

This is a ploy by Russia that the OSCE has already rejected. The OSCE sent a small team of military monitors to Ukraine at Kiev’s request, but they have been barred from Crimea to date. What the Crimean authorities have asked for is different: an ODIHR team to give some legitimacy to the secession referendum. As OSCE officials have already pointed out, sending the monitors would imply some sort of advance recognition of Crimea’s right to secede, thereby weakening Ukraine’s sovereignty. There will be no ODIHR presence in Crimea, and this "change of heart" was an entirely cynical maneuver.

Does the OSCE have a role beyond election monitoring to play in crises like this one?

The OSCE can do three things in Ukraine, even if Russia does not want it to play a major role. Firstly, it can keep its military monitors on the ground as a tripwire in case Moscow decides to attempt military advances outside Crimea. Secondly, ODIHR can confirm that the upcoming Ukrainian national elections are free and fair; this will be necessary to counter inevitable negative propaganda from Moscow. Finally, the OSCE High Commissioner on National Minorities, who is independent from government interference, must keep a close eye on the treatment of ethnic Russians in eastern Ukraine. The new authorities in Kiev have to behave impeccably towards their Russian citizens, so as to avoid giving Moscow excuses to interfere. The OSCE can assist with that. That may sound like a modest role, but perhaps the OSCE is useful precisely because it pursues the modest goals of international compromise, cooperation, and civility.