Skip to main content
Is China Committed to Rule of Law?

Chinese leaders gathered for the fourth plenum amid a widening anticorruption campaign, ongoing protests in Hong Kong, and the release of weak economic indicators. While the plenum report, released on October 23, disclosed no major surprises, the Chinese leadership signaled it wants to improve the effectiveness and fairness of its legal system and ensure better implementation of laws, says CFR Senior Fellow Elizabeth C. Economy. But the plenum’s emphasis on rule of law "doesn’t mean that the Communist Party itself is subject to the law," nor is there likely to be greater transparency for the much-touted anticorruption campaign, she says. 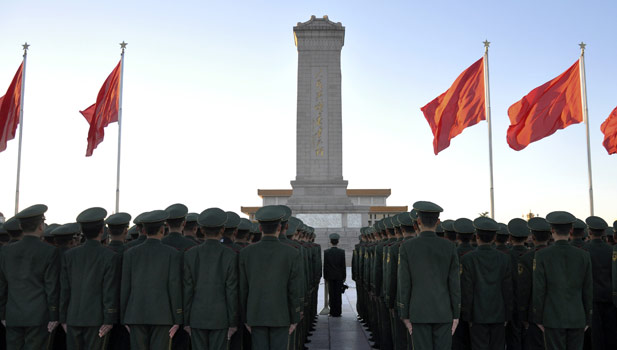 Paramilitary policemen stand in formation as they pay tribute to the Monument to the People’s Heroes in Beijing, November 17, 2013. (Photo: Courtesy Reuters)

China’s fourth plenum focused on rule of law this year. What does this mean in a Chinese context?

It’s difficult for Westerners to understand what the rule of law means in China, because it doesn’t mean the same thing as it means in the West. It doesn’t mean that the Communist Party itself is subject to the law. In fact, the party stands above the law. When we are looking at the outcome of the fourth plenum, we have to bear that in mind.

"The [anticorruption] campaign is being conducted by the party and for the party—and it’s going to be on the party’s terms."

What we see so far is a commitment on the part of the Chinese leadership to make the rule of law in the Chinese context more transparent, to take meddling by local officials out of the judicial process, to improve the fairness of judicial decisions, and to ensure better implementation of laws. These are all things that Xi Jinping and the Chinese leadership want to see happen in China. But that doesn’t mean that there will be greater transparency and rule of law for the anticorruption campaign. The campaign is being conducted by the party and for the party, and it’s going to be on the party’s terms. That is the sort of distinction that we really need to be mindful of.

Some experts have said that this anticorruption campaign is unique, targeting both the "tigers and flies"(high- and low-profile officials) within the government, the party, and across a wide array of industries. What kind of impact is this having?

First off, it’s important to remember that anticorruption campaigns have been part of the PRC’s political history since the early 1950s [under] Mao Zedong and they have never stopped happening. What Xi Jinping is doing differently is not so much that he is going after the big fish and the little fish, or "the tigers and the flies," because that too has been part of past anticorruption efforts in China. It is the scope and pace of the campaign that are significantly different. Xi has upped the number of prosecutions in the first year of the campaign to 182,000, [which is] 50,000 more than the yearly average in the previous five years.

There is also greater publicity being paid to the people who are being pursued, detained, and arrested than in previous campaigns, so that the Chinese public has a better sense of what’s going on with Xi’s anticorruption campaign. In terms of the nature of the campaign, however, there is a study underway by Professor Wang Yuhua at the University of Pennsylvania that looks at all prosecutions of the current campaign at the vice ministerial level and above, and it has found out that roughly half of them are in fact tied to Zhou Yongkang [a former Politburo Standing Committee member charged with corruption]. These results suggest that in some ways this anticorruption campaign—much like previous ones—is still politically motivated and not entirely about rooting out corruption.

What does the campaign say about Xi’s consolidation of power and the nature of his governing style?

We have seen very clearly that Xi has amassed a lot of power in a very short amount of time—more power than anybody since Mao Zedong. He has instilled significant fear and concern throughout party ranks, from the very bottom up through to the very top. But there is a substantial lack of transparency and an absence of public engagement in the anticorruption campaign. This is traditional Chinese politics, the Communist Party’s traditional way of doing business. Xi has demonstrated no interest in shining any sunlight on the process or offering any discussion of who is being targeted and why. This is a significant shortcoming.

Leading up to the plenum, there was talk that Zhou Yongkang’s fate would potentially be determined in these behind-closed-doors meetings. Yet the Chinese leadership was silent.

Had Zhou Yongkang’s fate been sealed at the fourth plenum, that’s all anybody would have spoken about. As it stands, Chinese leadership really wanted this plenum to be about the broad policy initiative and to be able to sketch out some of the contours of that policy, even though we don’t really have a good sense for what exactly is going to transpire in terms of reforming the legal system. We do have a sense for the overall direction.

This plenum kicked off as Hong Kong government and protest leaders were holding their first meetings after nearly a month of demonstrations. Beijing has been fairly reserved in its response to the situation but clearly wants a resolution. Can you speak a little bit about this?

Beijing appears to have exercised only a light hand in terms of overseeing what’s going on in Hong Kong. But behind the scenes, there has probably been a lot of activity. The Hong Kong leadership has certainly consulted with the Party leadership in Beijing. In addition, Xi Jinping met with the Hong Kong tycoons to tell them that there wouldn’t be any deviation from the Basic Law. Party leaders have reportedly met with foreign business communities to inform them that Beijing expects them not to support the protesters or their businesses will suffer. There is a lot going on behind the scenes, but in terms of the actual negotiations and discussions, the Hong Kong government is directly managing the negotiations with the protesters.

Again, if Hong Kong had featured as a big issue for this plenum, it would have overshadowed any of the reforms announced. I’m also not sure what Beijing would have been able to say at this stage. Beijing did mention in the fourth plenum communiqué that there will continue to be one country and two systems, but that was about the extent of it. The best thing that the Chinese leadership might have done would have been to say that the rule of law will prevail in determining the outcome of this set of discussions in Hong Kong.

At last year’s third plenum, China laid out vague plans for economic reforms, particularly to give market forces a greater role in the economy. A year later, where do things stand?

"These are big reform plans: they will revolutionize the economy if they come to fruition, and we need to give them more time."

It really depends on whether you see or want to see the Chinese economy as glass half full, or glass half empty. It’s very easy to say that the reforms have not moved very far, very fast. In fact, the US-China Business Council produced a report that could only find three small areas where actual reforms had been implemented. For example, China has reduced the number of days it takes to get a permit approved for a new business. But in terms of really big sectoral reforms, for example the financial sector, none of this has really advanced. That is one way of looking at what has transpired since the third plenum: not much has happened, just a lot of talk and no action.

On the other hand, one could say that this is the first year in eight more years of Xi Jinping’s tenure. These are big reform plans: they will revolutionize the economy if they come to fruition, and we need to give them more time. What we see now are the announcements of more reforms on top of the reforms from the third plenum. Looking at the reform plans, a number of them stretch out [over] many years, so there isn’t going to be the very sharp, all-at-once systemic reform that I and a lot of people were anticipating when we first saw last year’s third plenum communiqué. It felt very impressive at the time. But these reforms are much more likely to be slow, painful, and painstaking with a lot of debate, backtracking, and experimentation before the actual reforms are pushed forward, and, frankly, some of them simply won’t be pushed forward at all.

Right. Early on we had indications that the Shanghai Free Trade Zone wasn’t going to become the beacon of economic reform that many had expected. It had been trumpeted as the successor to the special economic zones of the Deng Xiaoping era. And then there was all sorts of backtracking, and it just hasn’t come to fruition in any sort of meaningful way. If Shanghai can’t get it right, then you have to wonder: what does that suggest for the other, much more aggressive types of reforms that the third plenum outlined? You can look at it two ways: either China is already in trouble or it is just beginning the reform process that will carry on for the next eight years.

China’s growth rates have fallen short of their targets this year, raising some concerns about the government’s ability to maintain sustained economic growth. What is at stake if Beijing fails?

What’s at stake? Xi Jinping has said that corruption is the biggest issue that he had to tackle—that failure to address corruption would mean the death of the Chinese Communist Party. The economy is clearly equally as important. It’s important not only for the Chinese people, but also for China’s role as a global power.

We have begun to see China assert itself in new ways. It has very ambitious plans globally for the growth of its economic influence and its political influence, but all of those plans are premised on a continued Chinese economic miracle. If that falls short, then everything else will fall short as well.