China’s dramatic stock market plunge this past June, in which it lost 30 percent of its value in nearly one month’s time after climbing to a seven-year high a few months prior, elicited a forceful government intervention, including an interest-rate cut, a cap on short selling, and trading suspensions. Despite this unprecedented response, Stephen Roach, senior fellow at Yale University’s Jackson Institute for Global Affairs and former chairman of Morgan Stanley Asia, says that "only time will tell if these actions are successful—or if they only buy time before the final stages of this correction run their course." Roach says that while the steep decline in equities will likely have a limited impact on the overall economy and the chances of a hard landing remain low, continuing stock volatility could set back critical capital market reforms. 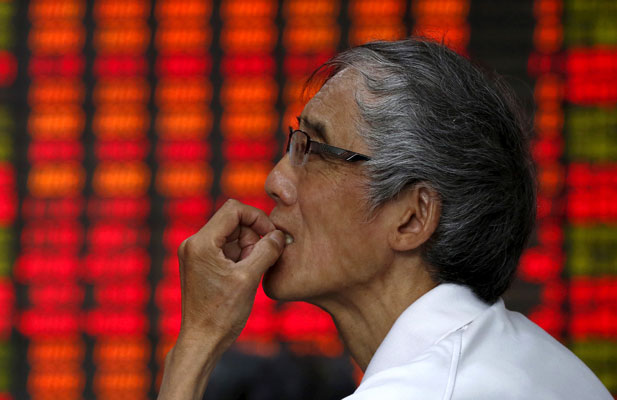 Who is investing in the Chinese stock market?

The Chinese stock market is driven disproportionately by retail individual investors. They tend to be young and relatively undereducated. Survey data from the China Household Finance Survey suggests that the majority of new investors in 2014 didn’t even have a high school education. Inexperienced investors came in and opened a large number of new accounts in the run-up to this bubble. They were opening roughly one to two million new security accounts per week in the first half of 2015. Half of the investors were new and prone to aggressive speculation. They also borrowed freely. There was an open-ended rush to buy stocks on margin. This kind of financing increased nearly threefold over the past year.

What caused the severe drop in the Chinese stock market?

This broad composite of the two domestic exchanges—Shanghai and Shenzhen, as proxied by the so-called CSI 300—increased by 145 percent in the twelve months since June 2014. This followed about six years of  weak or underperformance in Chinese equities relative to the rest of the world. While the rest of the world had booming equity markets after the financial crisis, China lagged. But in the past year—actually less than that—it caught up with a vengeance.

"It was a phenomenal speculative frenzy."

The real spark occurred in mid-November last year, when the government announced the opening of the Shanghai–Hong Kong Connect, in which investors from either market could buy overlapping shares—that is, shares dually listed, on both the Hong Kong and Shanghai exchanges. The new arrangement prompted a surge of international money in domestic Chinese markets. While Chinese markets were up over the course of the past twelve months, about 90 percent of that surge occurred right after this Hong Kong–Shanghai Connect opened. It was a phenomenal speculative frenzy.

The regulators didn’t sound any real warnings. Senior leaders were boasting that the surge in equity prices was a sign of strength in the Chinese model. Complacency on the policy and regulatory side further fueled the frenzy. These speculative binges invariably just run out of gas, and once they turn and they’re highly levered on a margin, the downside intensifies. And last month, within thirty days, Chinese markets dropped by 30 percent.

The rapid sell-off seems to have sparked a sense of panic in China. What is at stake?

There is some panic among the speculators who were plowing into this market as it was zooming to unsustainable heights. The government is concerned about the real economy and its financial-market reform initiatives. While this is a severe drop—and it may drop further once the government reopens the market—the impact on the economy is likely to be limited, in large part because the upside occurred in such a short period of time. Consumers, who ultimately make up the sector of the economy that responds to the ups and downs of changing stock market prices, didn’t have time to fully take on board these stratospheric levels of stock values. It takes a protracted rise in share prices before individuals will be convinced that the wealth is sustainable. It was short-lived on the upside, suggesting that the realization of explosive gains hadn’t yet sunk in. Perhaps even more significant is that the consumption sector in China is small, about 36 percent of GDP, approximately half of what it is in the United States.  That points to a much smaller "wealth effect" from equity price fluctuations than might nomrally be the case in more mature economies.

There’s a second area of concern: financial reforms. They are crucial to China’s overall agenda of shifting its economy to a more sustainable consumer-led model. A big piece of that is to wean borrowers, especially Chinese businesses, from bank lending, thereby deepening capital markets to provide borrowers alternative sources of funding. This recent stock market debacle sets this process back. Businesses and investors are going to be very reluctant to provide funds through the stock market to corporate borrowers. This bubble, and its subsequent burst, is a clear reminder of the perils of relying on unstable capital market funding strategies. This could set back financial reforms and keep a bank-centric model of corporate financing in place for much longer than the Chinese government would like.

Were the interventions by Chinese authorities an overreaction or an appropriate response to a potentially dangerous crisis?

When you are faced with a financial crisis, it makes sense to err on the side of overkill. This is what former U.S. Treasury Secretary Hank Paulson called "the big bazooka." The Chinese authorities have gone in with massive support, whether it’s putting together a $19 billion fund of equity market support for the major brokerages or having the central bank simply state that it’s prepared to use its balance sheet to support the stock market, without specifying what that really means. More controversial measures closed down the trading of 35 percent of the listed stocks in the domestic market, which has fallen so precipitously. Those are pretty draconian actions. But as large as these efforts are, you still have a market that’s only partially open, with a large portion of still closed. When bubbles start to unwind, and the market reopens, it’s difficult to arrest these types of sharp, cumulative contractions.

What does the Chinese government’s response tell us about the future of China’s economic reforms and its overall growth strategy?

I’ve had these discussions with senior officials, regulators, and policymakers in the last month. They are all in agreement that, if anything, this crisis underscores the need to stick with this strategy of shifting toward a more sustainable growth model. The Chinese have been at this in earnest for four years and are likely to continue with this strategy easily for another decade or so. Having said all that, China makes a distinction between its long-term plan and short-term measures used to tackle disruptions that afflict the economy. The Chinese leadership has had to be pretty aggressive in the light of the market decline. Some people say this is the death of Chinese reforms, but I don’t buy it. There is still a strong conviction in China to stay the course, but the capital market piece of that reform agenda is certainly being called into question by this bursting of the Chinese equity bubble.

How has China’s ruling party fared in it attempts to strike a balance between state interventionism and market forces?

I don’t view Beijing’s aggressive efforts to deal with the sharp decline in the equity market as a serious threat to its focus on market-based reforms, which were stressed in the so-called "Third Plenum" in November 2013, but their targeted efforts to support a plunging equity market raise important questions in this aspect of their commitment.

"Chinese regulators appear to be doing their best to temper the market-based bursting of an enormous equity bubble. Only time will tell if these actions are successful—or if they only buy time before the final stages of this correction run their course."

To be sure, all the leading market-based economies are pretty much doing the same thing—albeit dressed in different clothes. Quantitative easing—first in Japan, then the United States, and now Europe—is just as aggressive an effort to manipulate asset prices by reducing long-term interest rates, thereby boosting equities. By keeping its benchmark policy rate well above the dreaded zero bound, the People’s Bank of China is actually better positioned than other central banks to maintain effective market-based control over monetary policy. In the same sense, the bursting of China’s equity bubble is a big deal that justifies an aggressive tactical policy response. However, by suspending trading on more than one-third of all listed stocks, as well as by assembling a $480 billion government-supported equity market funding package under the auspices of the China Securities Finance Corporation, Chinese regulators appear to be doing their best to temper a market-based bursting of an enormous equity bubble. Only time will tell if these actions will be successful—or if they will only buy time before the final stages of this correction run their course.

What are the trend lines for China’s economic growth?

The Chinese economy grew 10 percent annually for thirty-three years. Now it has slowed to 7 percent—what the government wants to call the "new normal." The underlying trend of 6.5 to 7.5 percent growth is a realistic way to look at the growth of the economy in the years ahead. There will be periods when it goes above it and there will be periods when it goes below it, but there is likely to be a marked slowdown from China’s previous 10 percent norm because China is shifting to a services-led consumption model. In any economy, services-led consumption grows much slower than an economy led by manufacturing, investment, and exports. China is no different than others in that respect. Yet, the odds of a hard landing—with the economy slowing to some 2.5 to 3 percent growth—are low. China still has enormous investment needs and must boost its endowment of workers with new machines and technology. There is also the huge undertaking of urbanization and the infrastructure projects associated with it. That process is likely only halfway through and will probably run until 2030, adding another twenty million new urban citizens anually.

China has a high domestic savings rate—close to 50 percent—and the means to fund these investment projects. This investment is a linchpin of China’s development strategy. It will move poor people from rural to urban areas with employment opportunities, predominantly in services, where they stand to make three times what they earned. As a result, that gives them more potential purchasing power as consumers. The final piece of the consumer equation that has been missing from Chinese policy is a more secure social safety net along the lines of Social Security and Medicare. Progress is being made there, but there’s still an awfully long way to go.

The International Monetary Fund, both criticized and lauded for its efforts to promote financial stability, continues to find itself at the forefront of global economic crisis management.