The so-called Islamic State’s claim of responsibility for the Nov. 13 terrorist attacks in Paris raises questions about the future of Muslim minorities across Europe as well as how the continent will respond to the ongoing influx of migrants from conflict-wracked Syria and elsewhere. The attacks demonstrate that Islamic extremists are gaining momentum in their recruiting efforts, says CFR Adjunct Senior Fellow Farah Pandith. The West "cannot win the war against extremists without a soft power strategy," Pandith says, but that requires "approaching this ideological fight with the same vigor we do the military one." 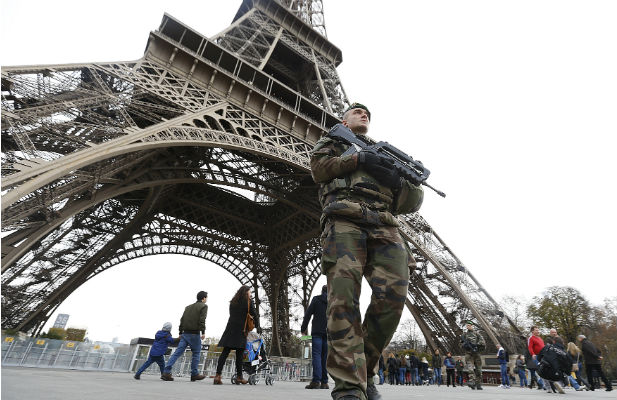 The French military patrol near the Eiffel Tower the day after a series of deadly attacks in Paris on November 13, 2015 (Photo: Yves Herman/Reuters)

The Islamic State has now taken responsibility for the attacks in Paris, and French President Francois Hollande has called it an “act of war.” How can a government best respond in the aftermath of such a tragedy?

The Islamic State has learned from the response to Al Qaeda from governments around the world that there is little political will to go “all in”—that is to say, to fight a war with all the hard and soft power tools available to us. They have understood that governments are willing to do only so much. They are betting on this.

While we may argue about the best military approach to the Islamic State, there needs to be an attempt to halt their emotional momentum. By demonstrating military power (taking over territories) and psychological power (stoking fear and recruiting youth) they have developed a narrative of success. This narrative is critical to them. They can’t win over new recruits if they are perceived as weak. Thus, their momentum must be broken in both the military and ideological war.

Since the September 11 attacks, the military response to terrorist organizations has been vital, as well as the ability to shut down their financing. But, we cannot win the war against extremists without a “soft power” strategy. Their armies can’t be built without recruits.

What does this soft power strategy entail?

Governments must pursue the war of ideas with purpose and significant resources, but stopping extremists from luring our youth means bringing in efforts from outside of government. Governments are not credible in the ideological war, but they do have the capacity to support local actors.

“In America, in France, and around the world, far too little has been spent on the war of ideas.”

What does that mean? Mostly, it means being the convener, facilitator, and intellectual partner with those that have credible voices in local communities. Here, government can help in various ways. It can provide connections to local entities who need to professionalize their work. It can help fund to organizations doing the work to develop counter-narratives to extremism both online and off. It can also give parents a reality check on how extremists recruit and support grassroots partnerships that fight the radicalization process. Above all, we need to approach this ideological fight with the same vigor we do the military one.

These local efforts must be scaled up massively to make a difference, but it can be done. In America, in France, and around the world, far too little has been spent on the war of ideas, as recruits continue to join extremist armies. Governments, including the U.S. government, must take this on in a real way, including creating a central point of command that reports directly to the president.

How have French and other European governments been trying to limit the appeal of extremism, and how might that need to change in light of what appears to be a stepped up campaign by IS?

There are three things here. First, Europe isn’t a monolith. Local circumstances make a huge difference. Colonial history, the history of Muslim immigration, the role of foreign imams, the kind of textbooks being used—all these things impact the makeup of different communities.

Second, European governments have very, very different approaches to their minority populations. From country to country, there is a huge difference in the lived experience of daily life and feelings of belonging among minority groups.

Third, with each attack in Europe—from the murder of [Dutch filmmaker] Theo Van Gogh to the [2004] Madrid and [2005] London bombings—European governments have re-evaluated their approach to the problem of extremism. There has not been an integrated assessment of the greater European threat until recently. Even now each country is fighting the ideological war in their own way—from interfaith and educational programs to the harder end of the soft approach like supporting local NGOs that produce counter-messaging videos, for example. But there has been more Europe-wide sharing of programs and a number of conferences have been organized to showcase what different governments are doing.

How effective has this been?

Nothing has been at scale. And each government has struggled with how to give money to local efforts without corrupting their authenticity. Thus government efforts have not been particularly inventive or effective.

Ultimately, the ability of governments to fight extremist ideology is limited by its very nature. The public sector is really not best positioned to do this. However, European governments have demonstrated a more genuine desire to pursue the ideological fight in recent years, though it remains to be seen whether that newfound commitment will result in tangible results.

More than one thousand French nationals have been recruited by the Islamic State. What is behind the appeal of the ideology for the French in particular?

The appeal of the ideology has to do with how Muslims of the millennial generation are trying to navigate their identities in a post 9/11 world. The extremist narrative centers on an “us vs. them” mentality, and it’s designed to exploit this generation’s identity crisis.

France is home to the largest population of Muslims across Europe. The story of Islam in France takes many shapes, but it is connected to Muslim youth around the world due to this shared experience of a crisis of identity. Young Muslims under thirty are "digital natives," and, like anyone in that age group, are influenced by their peers. The extremists have cornered the market share for the attention of kids in who don’t have a clear sense of who they should be, and are eager to get answers.

This is not the right way to look at it. While our law enforcement has been vigilant and we have been able to stop attacks, the Islamic State’s recruitment efforts for American youth remain strong. James Comey, the Director of the FBI, has said that there are active investigations in every U.S. state. In the last seven months alone, over one hundred Americans have gone or have attempted to go to Syria. While this number may seem small it has a far greater impact in terms of the Islamic State’s "virtual armies" and its ability to attract additional recruits.

However, there are some important factors that make the United States unique. Islam has been a part of the nation since the start, and every President since George Washington has talked about Islam with dignity and inclusion. We have the most diverse group of Muslims anywhere on the planet, and this has largely forestalled the divisive narrative that extremists rely on.

America has a unique opportunity to demonstrate how to diminish the appeal of extremist ideology. Precisely because we have so much diversity within our Muslim communities—with citizens with roots in every nation on earth—the multitude of American Muslim voices could provide a serious counterweight to extremist narratives. Combined with a U.S. culture of regular citizens taking the initiative on important public issues like HIV or climate change, the United States could potentially serve as a prototype for effective community engagement on this issue. In addition, we have a culture of private philanthropy that Europe doesn’t—we give to global issues, and private dollars can make a difference to these kind of grassroots efforts.

“America has a unique opportunity to demonstrate how to diminish the appeal of extremist ideology.”

We should be leveraging the efforts outside of government and in local American communities. There are already efforts through pilot programs around community engagement in American cities like Los Angeles, Boston, and Minneapolis

But the United States can’t be complacent. We should not believe the fight is “over there.” France may have just closed its borders for the first time since World War II, but the reality is that ideology has no borders.

How has social media impacted the Islamic State’s recruiting and propaganda efforts, and how can the “digital war” against extremism best be fought?

Social media eliminated the barrier to the Islamic State to recruit and organize efficiently. It is an inherently decentralized medium, in which commitment and will trump geo-political power. The connectivity of social media allows, essentially, the crowd-sourcing of violence globally. In Charleston and Boston, shooters in the U.S. responded to calls to action from the Islamic State in Syria.

Over the past month, the Islamic State issued more than one thousand communications on its official brand channels alone. Pro-Islamic State tweets since the Paris attacks have already numbered in the hundreds of thousands. The Islamic State also targets youth one to one on social networks and Internet forums.

Still, the West boasts more resources, better technology, and greater creativity when it comes to social media. The next generation will inevitably hear extremist messages, but those must be countered. Governments can intervene directly to stop Islamic State recruitment efforts, but it is unreasonable to expect them to create compelling narratives by themselves. Thus the response to the Paris attacks requires the private sector in particular to commit to better prevention, in order to narrow the pool of potential recruits.

What can the private sector do?

Private groups can organize a volunteer army of social media "early responders" to swarm, obfuscate, co-opt and block Islamic State content. It can partner with former extremists through efforts like the Against Violent Extremism (AVE) Network, in order to directly intervene when young millennials are being radicalized online. An "influencer" network of credible content creators can be created who understand the generational, theological, and cultural nuances of their local communities.

Finally, the private sector is much more skilled at producing actual content—memes, videos, and other programming—and deploying it based on data analytics, in order to have the greatest impact. In this way, we can out-distribute the Islamic State by offering more messages from more credible voices on the same social and mobile platforms that terrorist groups use. It is within our reach to defeat the Islamic State in the digital war.

Has Russia Ended the War Between Armenia and Azerbaijan?

Azerbaijan’s success in the conflict over Nagorno-Karabakh means Putin’s peace deal is likely to last. It also rules out further diplomacy.

With Washington absent and Berlin indifferent, it has fallen to Paris to deter and defuse the situation.

What’s Next in the Eastern Mediterranean?

Mounting tensions between Greece and Turkey in the Eastern Mediterranean could depend on the outcome of the U.S. presidential election.