The critical foreign coverage of unrest in Ferguson, Missouri, is the latest instance reflecting perceptions abroad of American hypocrisy, says Philip Seib, an expert on media and foreign policy. "The United States preaches about transparency in government and about human rights around the world," Seib says, "and then trips up on [National Security Agency] snooping and out-of-control policing in Ferguson." He says that while the negative imagery from events like Ferguson is difficult to counteract, U.S. public diplomats can do a better job of promoting foreign policy successes like humanitarian relief. 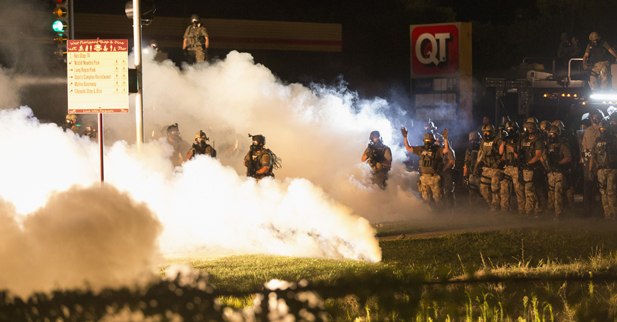 How much of an effect do the events in Ferguson have on foreign publics’ perception of the U.S?

The events in Ferguson have negatively and significantly affected global perceptions of the United States. Part of this is due to the predictably hostile tone of news coverage from Russia, Iran, and the like, but the undistorted truth, as seen in the photographs and video emerging from Ferguson, tells a story that contradicts official U.S. messaging about championing human rights. When a half-dozen police officers in full military gear confront one apparently unarmed African-American with his hands raised, the image of that has its own power; no propagandistic adornment is necessary. Damage is done.

Much of the critical coverage is coming from U.S. allies—the UK, Germany, Canada—is this a symptom of deeper discontent with Washington?

From allies and others, much of the criticism reflects discontent with what is perceived as American hypocrisy. The United States preaches about transparency in government and about human rights around the world, and then trips up on [National Security Agency] snooping and out-of-control policing in Ferguson. There is a bit of schadenfreude as a result.

In general, how do you feel the U.S. brand is faring abroad these days?

I don’t like using "brand" in referring to nations because it trivializes foreign policy; a nation is not a soft drink. But the United States suffers from a perceived lack of resoluteness. When the [Bashar al-] Assad regime in Syria crossed the "red line" President Obama had drawn [with a heightened threat of punishment for use of chemical weapons], and then the United States did nothing, American credibility suffered considerable damage.

How do negative events like Ferguson balance against positive ones like U.S. humanitarian relief after the Fukushima disaster or Haiti’s earthquake?

The exceptional assistance that the United States has provided in the aftermath of numerous humanitarian disasters should be a more central ingredient in U.S. public diplomacy messages about what this country stands for. Granted, self-praise may seem inappropriate when many thousands of casualties have occurred and when many more thousands are living in misery, but reality must trump modesty. Too many people have only a vague concept of what America is, and fixing that requires a certain amount of self-serving communication.

How does this communication work? Who carries it out and through what channels?

Social media can be helpful in reaching global publics about these matters, and diasporas can be helpful conveyors of messages using these media. For instance, the U.S. government can rely on its own messaging, but also work with the Somali and Haitian diasporic communities, among others, to relay these messages through their own networks. This requires a more sophisticated understanding of the dynamics of networked media.

What are the ways, through formal channels or otherwise, that the U.S. can mitigate the negative foreign press? Can the narrative abroad even be shaped these days?

Negative coverage can be mitigated by not having negative events. International coverage of what happened in Ferguson cannot be dismissed as propaganda or as fundamentally untruthful. The facts and images speak for themselves.

If there is a meaningful systemic response to the shooting and the environment within which it occurred—poverty and racial injustice—that should be made clear to the global community. Special efforts should be made to court foreign journalists—not necessarily the ones who are invariably hostile, but those who will provide even-handed reporting. This is an uphill climb, as long-term policy is not as compelling as are on-the-spot video images, but developing that message is a big part of the job of U.S. public diplomats.

Major state-run media in countries like China and Russia wield heavy influence in shaping their public’s perception of the U.S. and other potential rivals. By many accounts, the Russian propaganda machine has been essential in drumming up domestic support for Putin’s intervention in Ukraine.

In countries such as Russia, where media are tightly controlled and the government message is the only message, "news" and propaganda become indistinguishable. That leaves little space as "intellectual entry points" for competing perspectives. U.S.-funded international broadcasting, like Radio Free Europe/Radio Liberty (RFE/RL), is helpful in counteracting this propagandizing, but social media, which leap national boundaries and many government controls, may increasingly be the best way to reach otherwise estranged publics.

The Russian propaganda machine today makes its Soviet predecessor look feeble by comparison, but I would not overrate its long-term global impact. People around the world have access to diverse information sources, and even granting the popularity of "Russia Today" as the Kremlin’s message-delivery tool, it must compete with many other voices.

Besides news outlets, what are some of the other major influences on foreign perceptions of the U.S.?

Perceptions of the United States are heavily influenced by perceptions of American culture. In this regard, I would argue that one of the most influential Americans of the past seventy-five years has been Walt Disney. But when there is dissonance between the cultural imagery and persistent, dramatic news coverage, the news coverage will prevail in capturing public attention. Nevertheless, cultural outreach remains an essential element of soft power and has important long-term influence on global perceptions of the United States.

The global media landscape has changed drastically in just the last decade, particularly with the rise of digital media giants like YouTube, Facebook, and others—what are some of the big trends you see on the horizon that will shape how foreign publics view the U.S.?

An essential ingredient of social media is conversation. In the days of heavy reliance on traditional broadcasting, there was a source (such as RFE) that delivered a message and an audience that received it. Today, the ’audience replies using social media. Public diplomacy must conform to this new reality. Policymakers must listen as well as talk, and the empowerment inherent in conversation must be recognized.

What are some of your fears with regard to how the country will be perceived in the years ahead?

I worry that public diplomacy is not taken seriously enough at the White House or State Department. [Former] secretary [Hillary] Clinton seemed to understand its value and was instinctively good as a public diplomat. But now, too much of what happens seems pro forma and resolutely conventional.

Closer connections between the public diplomacy professionals and USAID [the organization responsible for coordinating a large amount of U.S. foreign aid] would be a start. There should be more recognition that public diplomacy is only partly about information—its real success will come only when it focuses directly on improving lives of people around the world. Jobs, housing, education, medical care, and such are what really matter to people; rhetoric about democratic values pales by comparison.