The governing Justice and Development Party (AKP) is appealing to heightened Turkish nationalism to regain a parliamentary majority in snap elections on Sunday. But voters frustrated with what they see as the party’s flagging commitment to democracy are likely to vote much the same as they did in the June general election, says Gonul Tol, of the Middle East Institute in Washington. The resumption of violence with the Kurdistan Workers’ Party (PKK), attacks on the pro-Kurdish Peoples’ Democratic Party (HDP)’s rallies, and the coalition maneuvering that is likely all point to an increasingly polarized Turkish political scene, Tol says. Prospects appear grim for a Kurdish peace process, she says. 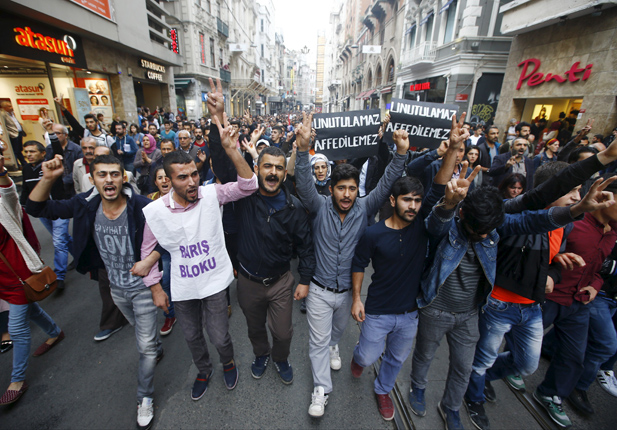 Demonstrators in Istanbul protest the Ankara bombings. The signs read, "We haven’t forgotten, we will not forgive." (Photo: Osman Orsal/Reuters)

Is there likely to be a different result than in June, when the AKP lost its parliamentary majority for the first time in thirteen years?

That’s certainly what [President Recep Tayyip] Erdogan hopes for, and it was the idea behind him calling for snap elections. Erdogan thought that ending the peace process with the PKK and the ensuing chaos would convince the nationalist voters and those who were reluctant to go to the polls to throw their support behind the government.

But except for a few pro-government public opinion polls, many polls suggest we’ll see similar results [to June, so] the AKP will not be able to capture a parliamentary majority, and the HDP, the pro-Kurdish party, will get around 12 to 13 percent.

In June, the kingmaker was the HDP. People thought that if the HDP made it into parliament, it would rid Erdogan of his presidential dreams and an AKP majority. This time around the Nationalist Movement Party (MHP), the ultranationalist party, will play the kingmaker. Although it generally abstains from religion-based politics, the MHP has a traditional, nationalist constituency similar to that of the AKP. So if the MHP increases its votes in November, this will be at the expense of the AKP.

What is the MHP’s platform?

The MHP’s main demand has been to end the Kurdish peace process that the [AKP] first launched in 2009 in an effort to grant more rights to the Kurds. MHP leader Devlet Bahceli has repeatedly reiterated his party’s opposition to the [Kurdish peace] process.

During coalition talks [after the June vote], the MHP came up with several other demands from the AKP, including holding Erdogan, his son, and others in his close circle involved in a corruption case accountable and asking Erdogan to stay within the constitutional boundaries of the largely ceremonial presidency.

How plausible is an AKP-MHP coalition?

The MHP is the AKP’s most natural coalition partner, yet [after the June vote,] Bahceli refused to enter into a coalition with the AKP without its demands met. So this time around, it all depends on how much the MHP loses on November 1. There has been a lot of criticism from Bahceli’s own base because he came across as a leader who was not interested in governing, which alienated a portion of his constituency.

If he loses enough votes, the MHP leader might be more willing to form a coalition with the AKP. But it will take a lot of bargaining. The AKP will not back down on the corruption cases, and Erdogan will fight not to give up his de facto control of the AKP. It is a matter of survival for Erdogan and his family.

We just saw twin bombings at an antiwar march in Ankara that are the deadliest in modern Turkish history, following bombings at HDP rallies in Suruc and Diyarbakir. Will that violence have an electoral effect?

Public opinion polls suggest that it won’t have a game-changing effect because everyone sees it from the perspective of the parties they support. The perpetrators were ISIS members, yet the official rhetoric of the government has been that they were carried out by the PKK, the Islamic State, and [Syrian President Bashar al-] Assad’s intelligence service. That makes no sense, but it is how the pro-government media portrayed the bombing. The anti-government media, on the other hand, presented it as the result of the government’s Syria policy and the incompetence of Turkish intelligence that has been politicized under the AKP.

“After the latest bombing—the third in recent months—Kurds are completely alienated. The overwhelming majority is now behind the pro-Kurdish party.”

This will, however, further alienate the Kurds, because the majority of those targeted were Kurds and left-wing organizations. The historical pattern has been that 50 percent of Kurds supported center-right parties—the AKP in this case—and 50 percent supported the pro-Kurdish party, the HDP. With Kobani, that pattern was broken. [Editor’s note: Islamic State militants temporarily seized the Syrian border town in September 2014. Kurds largely perceived the Turkish government as having tolerated the Islamic State’s takeover to prevent the emergence of an autonomous Kurdish region.] After the latest bombing—the third in recent months—Kurds are completely alienated. The overwhelming majority is now behind the pro-Kurdish party. This will make it even more difficult to solve the Kurdish problem because the HDP has become more Kurdish nationalist and the AKP has increasingly adopted Turkish nationalist discourse.

In June the HDP had cobbled together a broad coalition of conservative Kurds from the AKP and ethnic Turks disenchanted with the AKP long rule. Is the HDP able to keep these different constituencies under one umbrella?

It was a broad coalition: they had the conservative Kurds, liberals, and young CHP voters who were alienated by their own party. [Editor’s note: The secular, center-left Republican People’s Party (CHP) is the party of modern Turkey’s founder, Mustafa Kemal Ataturk.]

The HDP still has the backing of the liberals as well. Anti-AKP sentiment is even higher [than in June] among liberals who think that Erdogan resumed the war against the PKK and drove the country to the edge of civil war for his narrow political interests. According to them, the HDP offers the best hope for Turkish democracy.

But the HDP could lose CHP voters. They voted for [HDP co-leader Selahattin] Demirtas mainly because they thought that he could be a mainstream opposition leader who could build a new, post-Kemalist left in Turkey. These are nationalistic voters. They want the Kurds to have their rights, but oppose Kurdish demands for autonomy. Some [CHP voters] have been alienated, thinking the line [between the HDP and PKK has become] too blurred after the PKK resumed its attacks after June elections.

Turkey is juggling different objectives in Syria: It is anti-Assad, against the emergence of a Kurdish state, and it joined the U.S.-led coalition against the self-declared Islamic State. How are Turkish voters talking about this?

“For the regular voter, the Syrian conflict is not [just] a matter of foreign policy. Turkey holds more than two million Syrian refugees.”

The government’s Syria policy is very unpopular, even with its own constituency, and has been for several years. For the regular voter, the Syrian conflict is not [just] a matter of foreign policy. Turkey holds more than two million Syrian refugees. The Islamic State has established networks in major Turkish towns—not just border towns but Istanbul, Ankara, and even western towns. There is growing radicalization among Turkish youth. There are reportedly thousands of Turkish nationalists who have joined ISIS. The bombings in Suruc and Ankara were reminders of that. So people see the economic, social, and security implications of [Turkey’s Syria] policy in their daily lives.

Despite this unpopularity and the fast-changing facts on the ground, the Turkish government refused to recalibrate its policy until recently. Turkey recently for the first time said that [it could accept] Assad [staying on] for six more months [in a political transition]. Russia’s military buildup in Syria, the disarray of the Syrian opposition, Kurdish forces gaining ground, and Ankara’s increasing marginalization in regional affairs have forced Ankara to readjust its stance on Assad.

Turkish accession to the EU is getting renewed attention, with German Chancellor Angela Merkel coming out in favor of it, hoping Turkey will do more to stem the tide of migrants and refugees coming to Europe. How is this weighing on Turkish voters?

There’s increasing demand within Turkey for EU membership. The Turkish population thinks that Turkey has been too involved in the troubles of the Middle East and it’s best to go back to the traditional foreign policy orientation, which is toward Europe. As the government turns more authoritarian, more and more Turks see EU membership as a means for a more democratic country, not just a more prosperous life.

But Turkey’s EU membership is still a long shot. EU membership requires the unanimous approval of member states. The European fear of Muslim immigrants has been heightened by the Syrian conflict, and far-right parties are on the rise, so letting eighty million Turks in is even more problematic. Cyprus’s objection to Turkey’s membership further complicates Turkey’s EU process.

Many EU countries are also concerned about Turkey’s poor record on human rights, judicial independence, and freedom of expression. But I believe it is important to keep Turkey’s EU membership prospects fresh. Turkish democracy has suffered greatly in the last few years, and domestic actors either lack the capacity or the political will to introduce the necessary institutional changes to put Turkish democracy back on track. The EU, on the other hand, has played a constructive role in Turkish democratic consolidation. The AKP carried out several democratic reforms during its first term by passing an EU reform package.

The U.S. Needs to Prepare for More Billion-Dollar Climate Disasters Like Hurricane Ian

Billion-dollar disasters such as Hurricane Ian are on the rise in the United States. Officials should take swift action to reduce the damage and protect Americans.

As Global Recession Looms, a Perilous Moment for Central Banks

Many central banks are navigating turbulent waters as they battle inflation, a strengthening dollar, and an energy crunch. Should they coordinate policy?