Skip to main content
Deportations in the Dominican Republic

Authorities in the Dominican Republic said in June that roughly 210,000 undocumented immigrants in the country—an estimated 90 percent of whom are of Haitian descent—had just days to register with authorities or risk expulsion. Thousands have fled to neighboring Haiti and many more may follow, says Michele Wucker, author of Why the Cocks Fight: Dominicans, Haitians, and the Struggle for Hispaniola. Wucker says the pressure on Haitians is part of a cycle of tensions between the two countries sharing the island of Hispaniola that often reflects political and economic stresses. In this case, she says, the Dominican Republic is gearing up for a general election next year and Haitians make a convenient target for a government seizing on nationalist sentiments. 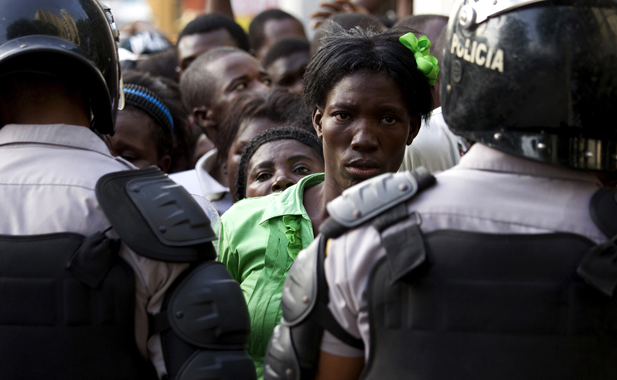 Haitians in Santo Domingo face police while waiting outside the Ministry of Interior and Police to register under a "Regularization Plan." (Photo: Ricardo Rojas/Reuters)

The Dominican Republic has a long history of discrimination against Haitian migrants and their descendants. What’s motivating the most recent crackdown?

Dominican-Haitian tensions tend to flare up whenever there is something else going on politically or economically in either country. The Dominican legislature recently approved consecutive presidential reelection, which means that President [Danilo] Medina can run again in the [May 2016] election. Politicians have long played to anti-Haitian attitudes during times of political tension as a way to gain the support of entrenched ultranationalists who hold sway in the political parties. But the dynamic is different this year, as many Dominicans support formalizing the status of at least some of the population of Haitian descent, which the ultranationalists oppose.

It has been a little more than five years since the earthquake in Haiti. There was a brief moment of what looked like a brighter future for cooperation between the two countries. But the severe economic and human toll that the earthquake took on Haiti resulted in more migration to the Dominican Republic, or at least the perception of it. After the earthquake, Haiti had to deal with more than a million internally displaced people, a cholera epidemic, political turmoil, and a severe economic contraction. Though its GDP rose in later years, much of that growth reflected rebuilding, not new economic vibrancy. Economic problems in Haiti driving immigration to the Dominican Republic and dampen the Haitian market for Dominican exports. The deportation crisis has put pressure on the Haitian government to handle those who have left or been forced out of the Dominican Republic.

What impact could this have on the Haitian and Dominican economies?

“As much as 5 percent of Dominican GDP depends on the Haitian and Dominican-Haitian population there.”

For Haiti, a big question is where are these people going to live? Many of them have limited ties in Haiti. Where are they going to find work? What are they going to do? In 1991 there was a massive deportation from the Dominican Republic to retaliate against the Haitian government’s criticism of the way Dominicans treated Haitians in the sugarcane fields. Those huge expulsions were destabilizing in Haiti at a very politically fraught time. This too is going to have repercussions within Haiti economically, politically, and otherwise.

Human rights groups say an estimated half million people are at risk of being deported, a process the Dominican government says is not underway.  Are these fears of mass deportations likely to materialize?

Hundreds of thousands of people are unlikely to be expelled in the current crisis, as some observers fear. The Dominican economy depends on the labor of both Dominicans of Haitian descent and recent Haitian migrants, as well as on trade with Haiti. It’s not in the Dominican government’s interest to further destabilize Haiti with mass expulsions. And while the Dominican government has dug in its heels against international criticism, it would not benefit from mass deportations making it a pariah.

Past waves of deportations and so-called voluntary exits have ranged from fifty-to-seventy-thousand people, which likely will be close to what happens this year. Tens of thousands of people have already left the Dominican Republic; an early July estimate from the Dominican migration agency was 37,000. Close to two-thirds of those surveyed by the International Organization for Migration in July had left of their own [volition]. More than a third said they were forced out, despite the Dominican Republic’s claim that there have been no deportations since late 2013.

In 2013 the Dominican Republic’s top court ruled that an estimated 200,000 Dominican-born people of Haitian descent were no longer eligible for citizenship. A 2014 law supported by President Danilo Medina, however, seeks to renationalize many of those people. What is their legal status?

It’s complicated. According to the Dominican government, they are no longer citizens. The official story is that there is a process for people to both reclaim their citizenship, which was removed in the 2013 constitutional court decision.

The deadline has passed for more recent migrants who wanted to naturalize. The Dominican government hasn’t properly acknowledged the extent of the problems with that process. Of the nearly 290,000 people who applied for regularization, just over 1 percent had been approved by the June 17 deadline. Part of the problem was Haitian authorities’ inability to meet the demand for help in obtaining documents.There were people who expended significant efforts to get their papers in order but haven’t gotten the paperwork that they need.

The solution could be to create a robust, legitimate system for getting peoples’ papers in order, ideally with international monitoring to make sure that the process is going the way that the Dominican government claims it is.

Haitian Prime Minister Evans Paul has said that deportations are causing a humanitarian crisis, and thousands of people have reportedly moved to camps along the Haitian-Dominican border. What would happen if tens of thousands of people relocated—forcibly or by choice—to Haiti?

The refugee camps will see some of the same problems that you saw in those that followed the earthquake. The question is, what kind or resources are going to be directed to these places? International humanitarian aid to make sure that there’s food and safety is required. Safety for women was a major issue after the earthquake, and it will be in these camps as well.

The bigger question is what happens in the long term. Will these people stay in the camps indefinitely? That’s not a great solution, but how do you find places for them in the economy at a time when Haitians living in Haiti are having a hard time finding jobs?

“There’s a lot of uncertainty about the leadership of the Dominican Republic right now. It’s very much in flux.”

What makes this round of [migrations] more disturbing is that it’ll probably be harder to return to the Dominican Republic than after some of the past deportation cycles. In the past when people would be expelled, many would eventually return. The intensity of the dispute this time will make it harder for people to come back. There’s an element right now of the Dominican Republic digging in its heels against the international community, insisting on sovereignty, insisting on its right to do whatever it wants. But the question is, just because you can do something, is that the best choice for your country, or the economy? Is it the best for the many Dominicans who have close family and economic ties with Haiti? Is it the best for the Dominicans who enjoyed the protections of the country’s commitment to international human rights norms? I think the answer to all of these questions is no.

The Dominican government is investing significant amounts of money in [public relations] and lobbying firms but has been isolating itself from the rest of the hemisphere and the international community. Internally, it’s done a good job of getting out its message of sovereignty and convincing Dominicans that the naturalization and regularization processes were serious, even though there’s extensive documentation of problems with those systems. Throughout the past, one of the strategies of authoritarian governments in both the Dominican Republic and Haiti has been to isolate the country. That’s bad for Dominican citizens and for Haitian citizens, as well as for the economy. When governments pick scapegoats, turn to this ultranationalist line, and crack down on immigrants, it usually means there are serious cracks in the foundation of the country’s economy and political structure. What is the Dominican government trying to mask here? There’s a lot of uncertainty about the leadership of the Dominican Republic right now. It’s very much in flux.

The Organization of American States has called for a dialogue on the Dominican Republic’s migration policies. Do you think there is a diplomatic solution?

There has to be a diplomatic approach, and having some other Latin American countries involved might be helpful. The focus should be on holding the Dominican Republic to its word that it intends to regularize people, naturalize people, and make things right. [Many of the people at risk] were born in the Dominican Republic under a constitution that said that they were Dominican citizens. Many of them have never even been to Haiti. The claim that they are no longer Dominicans or are stateless is legally debatable.

It’s important to note too that a lot of Dominicans and Haitians work together closely, and many Dominicans and Haitians in the diaspora would like to see this situation turned around. Although we focus on the conflict, it’s important not to overlook the ways in which there is significant cooperation. The two countries have extensive ties, as well as historical and cultural similarities. In many cases it’s not necessarily that these countries have had tensions because they’re so different, but rather, because they’re so alike.

The U.S. government continues to seek strategies for responding to the growing number of migrants fleeing poverty, violence, and other challenges in the Central American region.