The prospects for an interim agreement between Tehran and world powers to limit Iran’s nuclear enrichment program are "better than fifty-fifty" when diplomacy resumes in Geneva next week, says Barbara Slavin, an Iran expert for the Atlantic Council. Iranian president Hassan Rouhani faces growing political pressure at home to move negotiations forward, she explains. "He’s about to cross the hundred-day line, and he was supposed to get an agreement with the West to lift some of the sanctions, and he hasn’t achieved that yet." Meanwhile, she says that a separate deal Iran struck with the International Atomic Energy Agency this week, which allows the nuclear watchdog access to certain nuclear facilities, was a "very important step." 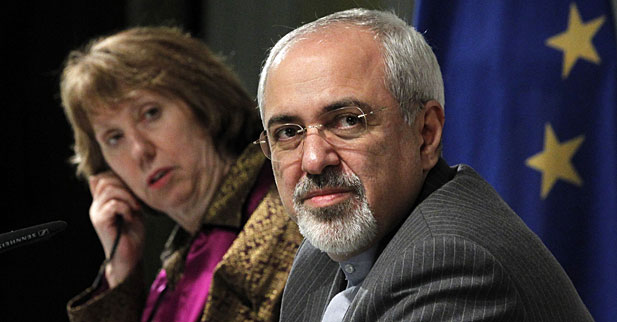 We’ve had a long weekend of nuclear diplomacy between Iran and the so-called P5+1 group [the United States, Britain, France, Russia, China, and Germany], which failed to reach an interim agreement. How close are we to an accord?

My impression is that we are close. Several individuals involved in the talks that I’ve spoken to over the weekend said that they are optimistic, that we’re not far from an agreement, that there are still a couple of important questions that need to be settled, but that they’re still expecting, as Secretary of State John Kerry has said, that this is a "doable deal" when talks resume November 20.

Do we know what held up the signing of an agreement this weekend?

It appears that the French were adamant on a couple of points—they wanted a specific commitment by the Iranians not to complete a heavy-water reactor at Arak that poses proliferation concerns; meanwhile, the Iranians wanted an explicit acknowledgement in the document of their "right" to enrich uranium. That was something that apparently the P5+1 would not accept at this stage. So there needed to be a return to capitals to figure out how to get over these obstacles.

And separately, Iran struck an agreement on Monday (November 11) with the International Atomic Energy Agency (IAEA). What is the significance there?

This is an overall joint statement on a framework for cooperation. It’s the first such agreement in six years. It’s quite detailed and says that the Iranians will give the IAEA early notification of any new nuclear facilities it is going to undertake. This is something that Iran is not obliged to do under the Nuclear Nonproliferation Treaty, but it is something that has been eagerly sought by the IAEA for some time—so it’s a very important step.

If you look at the annex to the agreement, you see that there is access that will be given to a uranium mine [Gchine mine in Bandar Abbas]. Information will be provided on all new research reactors, as well as information on sixteen sites designated for the construction of nuclear power plants.

But in terms of the Arak facility, the Iranians have promised access to the heavy water production plant, but not the actual reactor under construction. So this may be a point of friction. Also, there’s no mention of a site called Parchin, where the Iranians are alleged to have done some nuclear weapons research. The Iranians have essentially turned the site into a parking lot, so what, if anything, the IAEA would be able to discover if it actually went there is in question. Nevertheless it has been something that [IAEA Director-General] Yukiya Amano has called for in the past.

One other point: I saw Amano when he was in Washington about ten days ago, and I’ve never seen him so upbeat about cooperation with Iran. He said that after going around in circles for years with Iranians when Mahmoud Ahmadinejad was president, the Iranians really were seeking to make significant progress. So I think this is an important agreement. It doesn’t give away the whole store, but it has some important provisions that the IAEA has been looking for.

Going back to the Geneva talks over the weekend, what are your thoughts? I thought they were incredibly interesting because you had the foreign ministers of the six countries, except China—which had its deputy foreign minister there—and they were all really involved. For instance, Secretary Kerry was in a meeting for five hours with the Iranian foreign minister Javad Zarif and Catherine Ashton, the European Union high representative.

"That’s one of the most positive developments we’ve seen, because it’s become routine for the United States and Iran to talk to each other at a high diplomatic level."

That’s one of the most positive developments we’ve seen, because it’s become routine for the United States and Iran to talk to each other at a high diplomatic level. It shows exactly how serious these talks are, and how close they appear to have become. It’s highly ironic that the French now are being seen as an obstacle in some way to an agreement. I remember very clearly when I was researching my book, Bitter Friends, Bosom Enemies, talking to French diplomats who complained bitterly about U.S. obstruction during the George W. Bush administration. The good news is that the United States and Iran are talking together routinely, and surely they have reached some understandings. The question is: can they put it into language that everybody can accept?

What is driving the French on this? Why did they come out so strongly on this one?

They generally take a hard line on the Iranian nuclear program. When it was the so-called "EU3," they were tougher than the British and the Germans. They have remained tough under [former president Nicolas] Sarkozy and under [President] Francois Hollande—it’s the same bureaucrats who are advising Hollande as advised Sarkozy.

So the French are generally tough on this, but there are other things. Hollande is going to Israel this week—maybe he’s trying score some points there. The French have important arms deals with the Saudis. The French are also angry at [the United States] because we didn’t bomb Syria after they went out on a limb saying they would be willing to join us, even after the British parliament refused to give approval for strikes. And the French like to be French—they like to tack left when the world goes right, and tack right when the world goes left.

So when the negotiations resume November 20 in Geneva, what do you think the odds are for an interim accord?

Better than fifty-fifty. I think there is a real, compelling need on the Iranian side to have an agreement. I was in Iran in August when [President] Hassan Rouhani was inaugurated, and the audience he really has to satisfy is back home. There is tremendous skepticism about his presidency. He’s about to cross the hundred-day line, and he was supposed to get an agreement with the West to lift some of the sanctions, and he hasn’t achieved that yet. So, the Iranians desperately need sanctions lifted.

How much relief from sanctions would they get in this first round?

My understanding is they get what was on the table earlier this year, namely a lifting of sanctions on petrochemical exports, trade, and precious metals. And they get access to their oil revenues, which have been frozen in bank accounts in China, Japan, South Korea, Turkey, and India—the countries that are still importing Iranian oil.

And that’s very important because currently they’re basically stuck buying local products with the money in those accounts. The Iranians want to be able to have normal trade and purchase things like medicine from the United States and Western Europe.

Do you think the failure to reach agreement in Geneva over the weekend is going to give some hard-line U.S. senators an opportunity to raise the issue of more sanctions?

This is a big concern. We have two weeks now. Congress will be back in session before the Thanksgiving recess. This is supposed to be it, I think, for the Senate, and they have to pass a National Defense Authorization Bill. And there will be efforts to tack on a new Iran sanctions bill; this was done in 2011.

This would be very damaging to the process right now. The sanctions currently in place are already having an enormous impact on Iran; that’s one of the reasons the Iranians are at the table now. To put more sanctions on would just convince Iran’s Supreme Leader that there is no point in negotiating because the United States is after regime change. It’s a way for some in Congress to score points with an election year coming up, but it would be very harmful [to the negotiations].