World headlines have spotlighted two branches of the Taliban in recent weeks with the release of U.S. POW Sgt. Bowe Bergdahl and the assault on the Karachi airport in Pakistan. CFR Senior Fellow Daniel S. Markey, a leading expert on the Taliban, explains the different goals and tactics of the groups: the Afghan-based and focused outfit that negotiated Bergdahl’s release, and the Pakistani Taliban, which claimed responsibility for the airport attack and is in regular combat with the Pakistani state, military, and civilians. Markey says that the Pakistani government, under the leadership of Prime Minister Nawaz Sharif, is trying to negotiate a peace accord with the latter group, but the military leadership is losing patience with the lagging negotiations. As for the United States, he says, there is also a "waning patience for curtailing drone strikes if the Pakistanis don’t start taking the fight to the Pakistani Taliban in a more significant way." 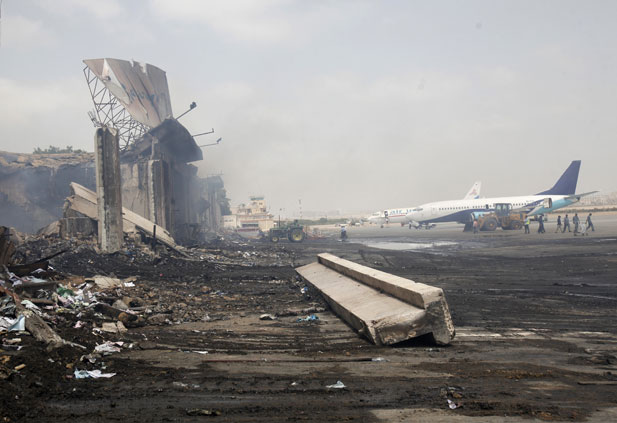 Are there two separate Talibans or one coordinated Taliban?

If we look at the Afghan Taliban, we are basically talking about the group that ran Afghanistan right up until just after 9/11. Their remnants and their leader, Mullah Omar, by most accounts are said to be based somewhere inside Pakistan, probably inside Balochistan. And then you have a significant offshoot that also swears allegiance to him: the Haqqani Network, based further to the north in North Waziristan, also inside Pakistan. The Afghan Taliban is notable for having hosted bin Laden and embracing a worldview that is backward, violent, and extreme. However, they are Afghanistan-oriented and focused. There really have been no instances of the Afghan Taliban turning their guns on the Pakistani state, attacking the people of Pakistan, or, more importantly in this case, the military.

So, the Pakistani Taliban is different?

Yes, quite different. The Pakistani Taliban, which has a younger lifespan, really came about in the mid-2000s, broadly in response to Pakistani military operations that took place inside Pakistan, but along the Afghan border. This group is dedicated to many of the same broad ends as the Afghan Taliban, and have even sworn allegiance to the Afghan Taliban to those ends. But they are also dedicated to attacking the Pakistani military, state, and civilians, which they have done to devastating effect, over the past decade or so. They are responsible for killing former prime minister Benazir Bhutto, shooting the young student and now global education activist Malala Yousafzai, for blowing up of the Marriot hotel in Islamabad—the list goes on. So they are much more actively at war with the Pakistani state.

But it is often said that the Pakistani government is the one who supports the Taliban.

Regarding this latest attack on the Karachi airport, there is a claim that Uzbek fighters were responsible for the attack. This may or may not be true, but these are the kinds of people who would float back and forth between the different Taliban groups.

Pakistan’s new prime minister, Nawaz Sharif, was reportedly trying to make peace with the Taliban. Does he have the support of the military?

Since the beginning of Sharif’s tenure a year ago, he has tried to reach out to the Pakistani Taliban, and in doing so he got the broad endorsement of all the different political parties of Pakistan. At an all-parties conference, many endorsed the idea of these negotiations, and yet very few serious people actually believed the negotiations could be anything other than a tactical success.

However, as the negotiations have dragged on, the Pakistani military has made it more and more clear that they would like to go after the Taliban and unleash a more significant military operation. They claim that the government’s attachment to these talks is hindering its ability to launch a major ground operation. It’s not clear whether these claims are warranted, but that’s what they are saying.

What would the United States government like to see happen in Pakistan?

I think it would like to see the people of Pakistan, led by their civilian, elected leaders, tackle not just the Pakistani Taliban, but also similar groups that really pose a threat to Pakistan, Afghanistan, India, and the wider region. Some of that is a bridge too far, given the limits of the Pakistan military and the weaknesses of the state. But going after the Pakistani Taliban is not, and that’s where Washington’s interests overlap with those in Islamabad and Rawalpindi (where the Pakistani generals reside).

Is the United States military helping out significantly?

The one thing the U.S. government appears to have done is they stopped the drone attacks ever since the latest round of negotiations with the Pakistani Taliban started. My belief, founded more on circumstance than direct evidence, is that they yielded to a Pakistani request that the United States not get in the way of their negotiations. When they fail, the Pakistanis will have their own reasons for attacking the Taliban. We’ve done our part, and now there is probably waning patience for curtailing the drone strikes if the Pakistanis don’t start taking the fight to the Pakistani Taliban in a more significant way.

We probably could be somewhat helpful on the Afghan side of the border if the Pakistani Taliban retreat across the border, which they have been known to do. And we could probably do more in the way of surveillance and attempting to stem that flow. But as our forces have been leaving Afghanistan and coming home, our military capabilities along that border area have also been significantly reduced.

How does the Pakistani military feel about the imminent American withdrawal from Afghanistan?

They want to be helpful in their way. That is, they would like to control the outcome of our negotiations with the Afghan Taliban leadership in a way that makes them more confident. So these things are linked: their uncertainty, fear, concern, desire for control and their sense that this was going to happen all along.

What is your sense of this deal with the Afghan Taliban that Obama announced? Do you think this is going to lead to anything?

I don’t have any confidence that it will lead to anything bigger than what it already produced. The Obama administration has made it clear what our timeline for departure from Afghanistan is, and this is, I think, well within the patience of the Afghan Taliban, so there are limited reasons for them to want to cut a deal with us. This doesn’t mean there is no reason to pursue a deal-making process with them; all of these things will have to go on because eventually the Afghan Taliban, who are a significant force, will have to be accommodated in some way.

We will have a new president in Afghanistan, if he’s not assassinated before then, but we don’t really know what is going to happen after he is elected.

I’ve heard from multiple sources that many Pakistanis are actually more comfortable with the idea of a President Abdullah, which is interesting because Abdullah Abdullah has long been identified with the Northern Alliance—not exactly friends with Pakistan. [This group was more on the Indian, Russian, and Iranian side during the civil war against the Taliban.] So Abdullah Abdullah would normally be a strange choice for the Pakistanis to favor. The logic, though, runs along the lines that as one of these more Northern Alliance, Tajik-centered politicians, he would be better equipped to come to keep his side at the table at a subsequent round of negotiations with the Taliban. But he also has to grapple with the fact that his own constituents are going to be very skeptical about any kind of deal with any element of the Afghan Taliban. They are going to resist it. They are going to fight it tooth and nail because they know what living under the Taliban is like, and they don’t want to get back to it.