The prospect of an independent Scotland has prompted fierce debate about the future of the pound sterling, European Union accession, and NATO membership. For Chatham House’s Richard G. Whitman, the projected "narrowness in the margin means some kind of Rubicon has already been crossed," regardless of the final vote count on September 18. "The UK is either on the road to becoming a much more federal state—that would be one of the consequences of a ’no’ vote—or we are going to see ourselves cleaved. Either way, it is not going to be the same the day after the vote," he says. 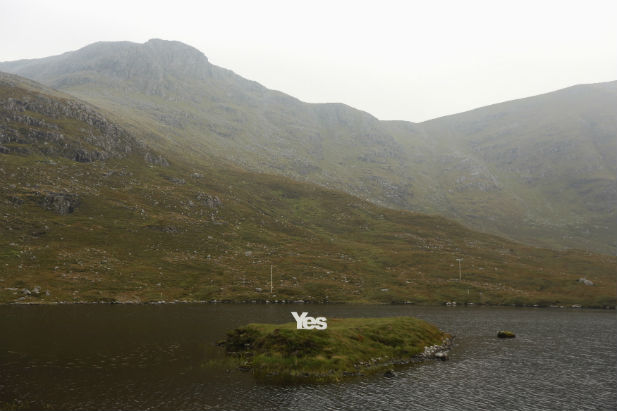 A "Yes" campaign poster is displayed on the Isle of Lewis in the Outer Hebrides. (Photo: Cathal McNaughton/Courtesy Reuters)

What happens to the United Kingdom if Scotland votes to secede on September 18?

The United Kingdom continues to exist because it is Scotland that will secede. Now that’s not just a legalistic observation, but it’s also an observation of what happens to Britain’s diplomatic and military infrastructure: it will remain with the United Kingdom. So Scotland, in effect, will be in a position in which it starts from scratch.

Whether it’s a "yes" or a "no" vote is slightly academic, because the closeness of the [polling numbers], which was unexpected twelve months ago, means that the issue won’t go away. Even if the "no" vote prevails—and the difference is smaller than ten percentage points—you’re facing a high probability of another referendum perhaps in five years’ time. The projected narrowness in the margin means some kind of Rubicon has already been crossed. It’s going to be very difficult to go back to where we were previously.

How would a "yes" vote affect the rest of the United Kingdom?

"The projected narrowness in the margin means some kind of Rubicon has already been crossed. It’s going to be very difficult to go back to where we were previously."

The two parts of the UK that are most profoundly affected by a "yes" vote are, one, Northern Ireland, because obviously the Unionist community in Northern Ireland is going to feel a lot of pressure. [Nationalists may start to think,] "If they’re willing to let Scotland go, then they might be willing to let Northern Ireland go." They may feel that history is on their side, and that unification with the Irish Republic is not too far off. So in the short term, you could see quite a lot of sort of public disruption and even low-level civil unrest in Northern Ireland. [The other part], Wales, is a slightly different situation, because the push there is likely to be for more devolution.

The Scottish National Party has promised to keep the pound in the event of independence, but the Bank of England’s Mark Carney recently warned Scots that a currency union with the rest of the UK would be "incompatible with sovereignty." Can Scotland be independent and keep the sterling?

It’s one part of the debate where there is some dishonesty at work. The situation is very clear: If Scotland seeks EU membership it will need to adopt the euro. That’s nonnegotiable.

[Leader of the SNP and First Minister of Scotland] Alex Salmond has performed all kinds of contortions to put himself in a position in which he’s argued for sort of a currency union with the UK because he knows that Scottish voters won’t find the idea of Eurozone membership attractive.

Still, the SNP has indicated that it would seek EU membership if the "yes" vote prevails. What are some potential stumbling blocks in Scotland’s path toward EU membership?

Scottish accession to the EU is going to be very tricky. There’s been the suggestion that it could be fairly straightforward, because Scotland already complies with EU laws. But there has to be unanimous agreement on the part of all member states for accession so you’ve got twenty-eight potential vetoes there. And some member states—like the Spanish government, [which is grappling with its own secessionist movement]—may well take the view that it would be better to prolong the pain of Scotland’s accession. In other words, they might accept the principle that Scotland can accede, but they might want to draw out the process in a way to send a signal to others who might consider this is a sort of route to reframe their nations that the road to EU membership is not as easy as some would like.

For Scottish nationalists, independence allows for a differentiation from the foreign policy that many people in Scotland have not supported: intervention in Iraq, possible intervention elsewhere. The rise of Islamic terrorism in the UK is seen to be directly attributable to the Iraq war—rightly or wrongly.

In other words, for many Scots nats, it’s a chance to sort of reboot, refresh—even decontaminate—Scotland from the UK’s foreign policy misadventures.

Scotland is very handy for the UK in terms of bases, because it’s a sparsely populated part of the UK in comparison to England. And obviously, there’s the issue of the British strategic nuclear deterrent, which is a very, very expensive bit of infrastructure, which is up there to service the Trident weapons system.

So there’s obviously got to be some kind of understanding between the rump UK and Scotland.

Regarding the submarine bases, the SNP has campaigned on a platform of a nuclear-free Scotland. But how do they square the removal of bases with NATO membership, which they’ve indicated that they’d like to have?

I don’t think you can square the circle. I would have thought the signal would be clear and unambiguous, which is that this would not be a good moment to start to question some of the underpinnings of NATO’s [nuclear deterrence]. If the UK had to move its independent nuclear deterrent, it will be spending money on rehousing Trident and not spending on other aspects of its defense.

Would Scottish independence expedite a "Brexit"?

But it’s not going to be straightforward, because if the Conservative government doesn’t get a majority in the next general election [in May 2015], then you don’t have the same kind of commitment for an exit referendum from the Labor Party. So the UK’s EU policy could look quite different next year.

What do you make of the global response to a potential Scottish secession?

There’s some disbelief, because the UK has looked like a pretty stable political entity [up until now]. When you see secessionist movements at work across Europe, there tends to be quite a lot of sort of political dislocation, sometimes civil unrest, that goes with sort of the secessionist and sub-national political movements.

"It’s a bit like a couple deciding to get divorced when they’re in their 70s."

[With Scotland and the UK,] it’s a bit like a couple deciding to get divorced when they’re in their 70s. They know one another very well. They’re comfortable with one another. And yet, for some peculiar reason, [one party] decides that it wants to be independent. And that’s really difficult for outsiders to understand.

[If a "yes" vote prevails,] British diplomacy would kick in and say, "OK, we’re five million less people, a bit less territory, but actually all the things we do internationally we will continue to do."

But the perception will be that the UK is diminished.

The UK is going to be preoccupied with how to proceed with the divorce settlement. A lot of political bandwidth will be spent on disentangling [itself from Scotland], which means there won’t be the same energy and attention to big international issues that you might otherwise expect.

Once people have sort of gotten over the shock, then some questions will arise about whether the UK really belongs on the UN Security Council. Of course, it’s very difficult to affect that reform, but it will raise that issue in people’s minds. [Size] will become an issue within the EU, of course, because the UK will no longer be one of the big three in terms of population.

How will negotiations over the North Sea oil and gas revenues break down?

Where the negotiations are likely to get testy and difficult is whether the Scots decide to seek a return on the past extraction. We’re back to the divorce analogy: exactly who paid for what and when? In other words, the Scots could argue that the UK received a disproportionate amount of wealth from the North Sea. And therefore, Scotland should be compensated by how much of the UK’s debt it takes.

Does Prime Minister David Cameron’s political future hang in the balance? And was it a mistake for him to agree to the referendum?

His future within the Conservative Party would be at end if there were a "yes" vote.

While I don’t necessarily think it was a mistake to grant the vote, I do think he was far too complacent [in the run up to the referendum]. There were a whole series of tactical mistakes, which have added up to a pretty disastrous strategy.

Do you have any predictions for the day after the referendum?

The UK is either on the road to becoming a much more federal state—that would be one of the consequences of a "no" vote—or we are going to see ourselves cleaved. Either way, it is not going to be the same the day after the vote.

The 1884 International Meridian Conference gave the world standard time and constituted a seminal moment in the history of globalization.

The Latest on Brexit

This blog post is part of the Women and Foreign Policy program’s interview series on Gender Equality in Foreign Policy, featuring global and U.S. officials leading initiatives to promote gender equality in the defense, development, and diplomatic sectors.