Skip to main content
Do the European Parliamentary Elections Matter?

Millions of voters from twenty-eight member states will take part in the European Parliament elections this week, a process that, for the first time, will partly influence who becomes the next EU chief. Judy Dempsey, an expert on European politics at Carnegie, says that it’s been roughly two decades since the EU had a formidable Commission president that could hold sway with the various member states. She says this seems unlikely to change: "At the end of the day, it will be the leaders of the big European countries that will do the backroom deals." Meanwhile, Dempsey says that significant victories for far right or far left parties, which many are anticipating, could install a parliament with "a shrilled anti-American tone, more scepticism regarding the Transatlantic Trade and Investment Partnership (TTIP), and a more restrictive policy with regard to immigrant and human rights." 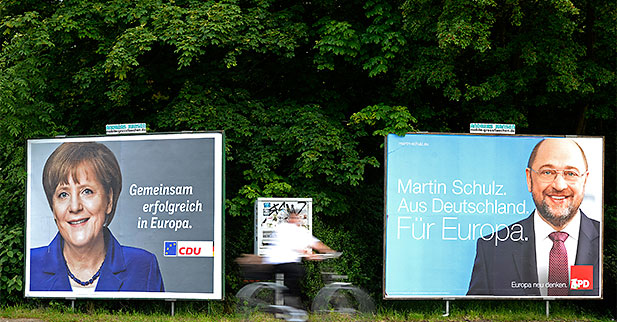 Why do these European Parliament elections matter?

More From Our Experts
Matthias Matthijs
Ukraine Could Become an EU Member. What Would That Mean?
Stewart M. Patrick
The G7, NATO, and the Future of the West
Christopher M. Tuttle
Foreign Policy Bipartisanship’s Mixed Blessings

For the first time since the Lisbon Treaty came into force in 2009, the European Parliament will play a part in choosing the president of the European Commission.

Who are the front-runners to replace outgoing president José Manuel Barroso?

A caveat: Even if either candidate’s party manages to get the most votes, there will be a lot of horse-trading between the member states as to who will become Commission president. Much depends on the composition of the next European Parliament. It may be a hung parliament, or it may be a parliament consisting of very different alliances. At the end of the day, it will be the leaders of the big European countries that will do the backroom deals.

How important is this job if so much power continues to reside with national leaders?

The leaders of the EU countries have immense power, particularly German chancellor Angela Merkel. That being said, so much depends on the personality and confidence of the president of the Commission. It has been a long time since the EU had a president that could hold sway over the member states. The last was Jacques Delors (EC president 1985–1994). Since then, the Commission presidents have been generally weak and often beholden to the member states. There is a consensus that the outgoing president, José Manuel Barroso, has been very disappointing. But then it was Germany and France who supported his candidacy; neither Berlin nor Paris wanted a very strong Commission president who could challenge their own national interests.

More From Our Experts
Matthias Matthijs
Ukraine Could Become an EU Member. What Would That Mean?
Stewart M. Patrick
The G7, NATO, and the Future of the West
Christopher M. Tuttle
Foreign Policy Bipartisanship’s Mixed Blessings

The general mood regarding the elections, across the twenty-eight member countries, seems to be one of apathy. What’s behind this?

"The recent economic crisis has fed into this sense of disillusionment with Europe and boosted eurosceptic parties across the continent."

The turnout continues to decline. This time around, the recent economic crisis has fed into this sense of disillusionment with Europe and boosted eurosceptic parties across the continent. The two most prominent are Britain’s UK Independence Party (UKIP) and France’s Front National.

But it must be said too that the mainstream parties standing for the European Parliament have not done the kind of grassroots campaigning necessary to defend Europe. In contrast, the nationalist/populist and fringe parties are exploiting this weakness with their own high-profile campaigning. They are well organized and highly motivated, and they are able to sell a very clear message.

Does this apathy reveal a larger disconnect between Europeans and EU institutions?

There is a huge disconnect, even though European Parliament deputies keep vowing to bridge this gap even through basic electioneering. This has not happened.

Many observers are anticipating big gains for anti-EU parties in the upcoming European Parliament elections. How would victories for fringe parties (on the left and right) impact EU policymaking?

"If the fringe parties do well, it could lead to paralysis in the European Parliament."

If the fringe parties do well, it could lead to paralysis in the European Parliament. It could also lead to shifting alliances. If—and it’s a big if—these fringe parties, left or right, could establish a united front in the parliament, then we could expect a shrilled anti-American tone, more scepticism over agreeing to TTIP, and a more restrictive policy with regard to immigrant and human rights.

It is said that the European Parliament still lacks legitimacy in the eyes of many voters. What further steps can be taken to bridge the oft-referenced "democratic deficit"?

Indeed, the European Parliament still lacks legitimacy. Voters across Europe cannot vote for Juncker or Schulz. Pan-European candidates do not exist. Voters can only vote for their own national list; or if they are living and registered in another EU country, they have to choose whether they will vote for the candidates in that country or their own country. Clearly, the gap between European citizens would narrow if there were genuine, pan-European political parties, and if the European Commission president was directly elected.

In light of the crisis in Ukraine, there is a renewed interest in a common defense and security policy. How can the incoming European Parliament boost European foreign policy in the coming months and years?

The Ukraine crisis has in fact exposed deep divisions in the EU over security and foreign policy. A real discussion about Europe’s security and foreign policy has yet to begin. The outgoing European Parliament did some excellent analyses on the weaknesses of European foreign policy. But it relies on the member states to make that essential difference when it comes to giving the EU a serious foreign, security, and defense dimension. NATO in fact has been setting the agenda on security issues. Even then, the western European members of NATO cannot agree about deploying troops on a permanent basis to the eastern European members of NATO.

Why have so many fringe parties and politicians aligned with Russian president Vladimir Putin?

For many of these fringe parties, they find Putin’s conservatism, his opposition to the so-called decadent West, and his anti-Americanism and anti-NATO stance appealing.