The Ebola epidemic in Liberia, Sierra Leone, and Guinea is the worst of its kind, having killed about 2,600 people by mid-September. Ebola has paralyzed its host countries, and the poor response by the World Health Organization and other global actors has allowed the infection rate to soar, says CFR’s Laurie Garrett. She welcomes the U.S. promise of aid and military support, as well as major pledges from the IMF and World Bank, but says drastic steps may be necessary to slow the spread. "The notion that we are going to build enough hospitals at the pace that we’re going, to keep up with the spread, is absolute nonsense," Garrett says. 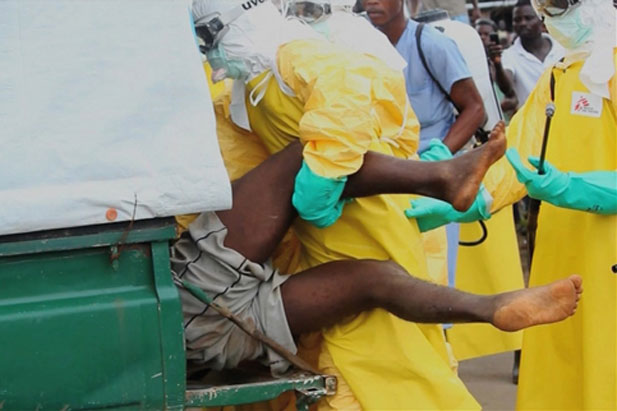 Health workers in Liberia push an Ebola patient who escaped from quarantine into an ambulance. (Photo: Still from Reuters TV/Courtesy Reuters)

President Obama has said the United States would commit up to 3,000 troops and would build as many as seventeen treatment centers with 1,700 beds. Is this an adequate response to the Ebola outbreak?

The scale of commitment and the sincerity and seriousness of the president’s statement will inspire a kind of rev up in the scale of the response from all over the world. That is very good. It’s fantastic that some of the greatest expertise the military has to offer will be brought to bear in tackling this epidemic. It’s a potential game-changer, but everything depends on the speed with which these promises can be executed.

Two weeks ago, the military and White House promised to erect a twenty-five-bed hospital in Monrovia, Liberia. It takes fifty to sixty days after funds are released to make [a hospital] operational, so even that very small facility will probably not be up and running until the end of October. The epidemic is currently doubling in size every ten to twenty days. You do the math: we currently have 5,000 recognized cases, and the assumption is what we see and count represents about a third of the reality, so we may have as many as 15,000 cases now, in two weeks that’s 30,000. Two weeks after that it’s 60,000. By the time the twenty-five-bed hospital is ready, it’s 120,000. By the time the other seventeen hospitals are in place, it could be 200,000.

I am very excited that the commitments are in place, but I am rather dubious about the capacity of the responders [to implement these changes] rapidly enough.

What can health officials there do in the meantime?

It’s not a best-case scenario, but one fallback plan is the [U.S. Agency for International Development] scheme to distribute 400,000 home-care kits that contain latex gloves, masks, disinfectants, and soap. The majority of new infections seem to be in women because they are the ones cleaning up the contaminated bodily fluids of ailing loved ones at home. [Distributing home-care kits] is not going to stop the epidemic, but it’s certainly going to lower the rate of spread and help save some of these dedicated mothers and sisters.

We’re not going to stop this unless we fundamentally get infected people away from the uninfected. It’s as simple as that. [French NGO Doctors Without Borders (MSF)] has said, "We don’t need a lot of fancy hospitals. What we need is to turn every single stadium and sports arena into a secure location that people cannot escape from, put cots in there, [provide] shade and protection from the rain, bring all the infected people into these spaces, and give them what little care we can." It’s not a bad idea. The notion that we are going to build enough hospitals at the pace that we’re going, to keep up with the spread, is absolute nonsense.

Do you think that this suggestion will be implemented?

Everybody is having a hard time facing up to the fact that something that sounds so morally repugnant is going to have to be the way out of this. Nobody wants to drag people out of their homes and dump them into a baseball stadium. It’s been done before, [during the 1918 influenza epidemic], people [were quarantined in] movie theatres and hotels that were commandeered by public health authorities, to stop the spread of the disease.

We’ve wasted a lot of time focusing on the possibility of a technological solution. It would be nice if in a year, two years, three years from now, we have a vaccine and we have some kind of viable, curative medicine. But we don’t now, and we’re not going to stop this technologically. As Americans, we tend to always want to find a quick fix that’s technological, and we have a hard time with answers that involve boots on the ground and harsh public health solutions.

Why is the virus spreading so quickly?

The virus spread initially within families, and then, as the families brought their loved ones to hospital settings, most of the spread of the virus was actually inside hospitals. Generally, the epidemics stopped when the healthcare facilities got cleaned up, and the villagers brought their infected members into the facilities.

"It would be nice if in a year, two years, three years from now, we have a vaccine and we have some kind of viable, curative medicine. But we don’t now and we’re not going to stop this technologically."

[Also,] until now, all the outbreaks were basically rural. This epidemic is spreading more in urban areas and from person to person in all kinds of different settings. It’s not primarily a hospital epidemic anymore. In fact, hospitals become warehouses for the dead and the dying, and the real spread is going on in the community, inside households, job settings, schools, wherever people congregate. This is probably why Sierra Leone decided Thursday [September 18] to take the very drastic measure of shutting down the entire country and putting everybody under mandatory house arrest for four days. A team of some twenty-thousand workers will go household to household, looking for the infected, and removing them.

It’s very controversial and has huge human rights and public health implications. If it works, I would imagine that both Guinea and Liberia would be hard pressed not to imitate the effort. But it is a drastic measure, make no mistake about it.

Is there a threat, as some experts have said, of the virus mutating into an airborne contagion?

It would be a pretty profound leap in mutation. To put this in perspective, we know the virus has already made more than 300 mutations in the last five months. And that’s significant. However, most of the changes have made no difference whatsoever in the ability of the virus to perform its biological function [in regard to its transmissibility].

I’m less worried about the virus becoming airborne than I am about it being able to outmaneuver any vaccine we throw at it. My concern is that Ebola is mutating and that, even if we find a vaccine, it may have very limited efficacy because of the virus’s capacity to constantly change its code.

Why has the WHO been unable to assume an assertive lead role? Budget cuts?

The WHO’s response has been abysmal. It’s just shameful. Yes, WHO is a financial shadow of its former self, operating on an inflation-adjusted budget that is less than it had in 1990. The WHO’s legislative body, the World Health Assembly, has consistently voted to downgrade the institution’s capacity to deal with outbreaks and infectious disease in favor of increasing commitment to noncommunicable disease programs such as cancer and heart disease.

When asked "Where is the WHO?" Margaret Chan, the director-general, said, "We are just a normative agency." In other words, the WHO’s job was to set standards for health, but not to actually intervene. That represented a very significant change over prior WHO policies, and in this case, since [no one intervened] except an NGO, MSF, it put the world in a very awkward situation.

Now the WHO is racing to catch up, to have some leadership role, and there are many institutions that want the WHO in the driver’s seat. But institutionally, and in terms of personnel, skills, and budget, it’s not the kind of WHO most people imagine. The moment for the WHO to claim a [credible] leadership role has already passed. I’m afraid [it] looks incompetent.

What do you see as the agency’s role?

In past epidemics, like SARS (Severe Acute Respiratory Syndrome), H1N1 (Swine Flu), or past Ebola outbreaks, the WHO responded with a combination of public diplomacy—carefully allowing nation states to maintain authority over their own outbreaks and crises—and very aggressive, behind-the-scenes demands for transparency, sharing samples, rapid identification of the causative agent, and corralling an international team of responders to work alongside the local responders to bring the outbreak under control.

"The moment for the WHO to claim a [credible] leadership role has already passed. I’m afraid it looks incompetent."

The most dramatic example of this dance between the public face of diplomacy and the behind-the-scenes face of aggression against disease would be Gro Harlem Brundtland, who led the WHO during the SARS epidemic. She knew that China was covering up a massive epidemic. Publicly, the WHO focused on countries that the Chinese epidemic had spread to, like Singapore, Vietnam, and Hong Kong. But behind the scenes, Gro Harlem Brundtland and her team used every single tool in the book to shame the Chinese government into admitting what they had on their hands and to make it clear that they would be culpable for deaths in the rest of the world if they [hid] what was happening. In the end, China did indeed aggressively take on its problem and stop the SARS epidemic.

What have the governments of Liberia, Sierra Leone, and Guinea been able to do to curb the Epidemic?

It’s been quite varied. These three countries had never encountered Ebola before, and there was a lot of skepticism until a secondary lab confirmation that [early cases were] Ebola. There was good reason for concern that the diagnosis was properly made before going too overboard in the response, but nevertheless each of these governments should have immediately asked for [outside] assistance not just from MSF but from [responders with larger capacity] to immediately build local medical responsibility and educate people. Unfortunately, that did not occur, and that’s why in June [there were] riots and protests against MSF. [There was] a lot of denial going on. MSF should have had teams of [local] health providers educating people at the village level. Unfortunately, they didn’t, and the virus spread to the cities. Now we have a catastrophe on our hands.

Can you outline some of the logistical challenges to bringing aid to West Africa? Will the deployment of U.S. military personnel help address these challenges?

I’ve heard from some of the UN leaders that they haven’t been able to land in some of these countries. As soon as you get a mile outside of any city you’re driving on dirt [roads]. When it rains, getting from point A to point B is next to impossible.

The logistics issue comes down to this: We need an operational air bridge. Ghana very courageously has volunteered to serve as the positioning center for all large-scale air transport and as the secondary transport [hub] for small aircraft flying to the three countries [Liberia, Sierra Leone, and Guinea]. The [U.S.] military can play a role in improving airport capacity, getting supply lines moving, and—where necessary—hiring crews to improve major thoroughfares so they can [transport supplies and patients between] villages and remote areas. I’m very fearful that in heavy rains patients won’t get to hospitals. Then we’re going to have whole village catastrophes.