The plunge in China’s stock markets beginning in June 2015, and the government’s blunt attempts to halt the damage, have raised alarm from emerging markets to Wall Street. But China’s economic problems go deeper than stock volatility, says CFR’s Robert Kahn in a written interview. Slowing growth and economic imbalances are pushing Chinese policymakers to reorient the country’s economic model. "Such an effort requires a commitment to making disruptive economic changes and a relaxation of state control over the economy, steps that have clearly been a challenge," writes Kahn. 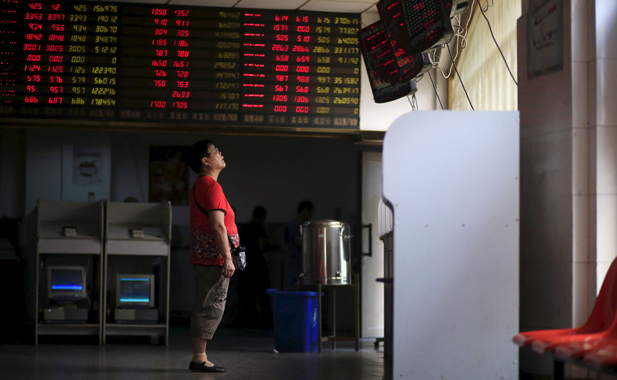 Does China’s stock market upheaval—and the global reaction—indicate deeper problems with the country’s economy? What does it tell us about China’s outlook for growth?

The immediate cause of the turmoil in Chinese and global markets was the August 10 decision by the central bank (the Peoples’ Bank of China, or PBOC) to introduce a more market-determined exchange-rate system. This move was largely a response to the collapse of the Chinese stock market in July and China’s subsequent monetary policy easing, which rapidly built up pressure on the currency. The more open exchange-rate regime resulted in a 2 percent devaluation on that first day. The currency has been volatile since then, closing down about 3 percent for the month.

These are modest moves. But the sharp global reaction—global stock markets have fallen between 5 and 12 percent in August and in many cases reversed their gains for the year—goes beyond surprise at the change in exchange-rate policy to reflect three deeper challenges facing the Chinese economy.

First, the economy has been slowing for some time, creating economic and political pressures on the government that cannot be addressed through exchange-rate depreciation alone. The government continues to target growth of around 7 percent this year, but actual growth has been substantially less than that, and private forecasts have been revised downward in recent weeks.

Second, excess construction  driven by government lending and fiscal policies and a massive stock-market bubble created imbalances that had to be addressed at some point.

Third, the Chinese government is in the midst of a decade-long effort to shift its economic model from one dominated by heavy industry and investment (i.e., growth based on exports) to one in which the consumer and service industries play a much bigger role (i.e., growth led by domestic consumption). Such an effort requires a commitment to making  disruptive economic changes and a relaxation of state control over the economy, steps that have clearly been a challenge for policymakers.

"It is hard not to be concerned that markets will remain unsettled and that downward pressure on the Chinese currency will persist."

For some time, market participants have been sanguine—perhaps overly so—about China’s ability to manage these challenges while continuing to be a driver of global growth. The argument was that the economy was strong, the government had ample resources to address any shocks (China’s international reserves still top $3.5 trillion), and it stood strongly behind these markets. All of these assumptions have been tested by the government’s vacillating response to the crisis, which combined seemingly uncoordinated monetary easing, fiscal stimulus, and heavy-handed interventions in the stock market, all of which undermined confidence. As my colleague Elizabeth Economy has noted, the noise around stock fluctuations has been amplified by the government’s lack of transparency and breathless speculation from markets, which have seemingly lost perspective on these longer-term trends.

Ultimately, China must allow greater flexibility in its currency and stock markets if it wishes to achieve its ambition of turning the renminbi (RMB) into a more global currency while maintaining control over monetary policy.

What is the global contagion risk of a Chinese economic slowdown?

The biggest risk of global contagion comes in emerging markets, many of which are commodity exporters threatened by a slowdown in Chinese demand for their goods. Many of these countries are already showing signs of stress due to macroeconomic imbalances, structural rigidities in markets, and capital outflows. Countries as diverse as Brazil, India, Indonesia, and Turkey have seen market pressures build in recent weeks. But the industrial world is vulnerable to contagion as well, given the global importance of the Chinese economy.

Could the market slide derail the European Union’s recovery, given that the EU is China’s largest trading partner?

Europe is more reliant on Chinese markets for its growth than the United States is, and its recovery is less robust and less established than that of the United States as well. As a consequence, there is a market perception that Europe is vulnerable to the turmoil in China, which has led to speculation that the European Central Bank (ECB) will need to expand its quantitative-easing program.

Does the depreciation of the renminbi and subsequent strengthening of the dollar have implications for U.S. domestic demand and economic recovery?

China accounts for only about 13 percent of total U.S. trade, and total U.S. exports worldwide make up less than one-sixth of the U.S. economy. Consequently, the direct effects of lower Chinese growth and a weaker RMB on U.S. GDP will be quite modest, lowering growth by only 0.1 or 0.2 percent of GDP this year. The question is whether the modest move in the RMB to date is the start of a more substantial depreciation over time or a one-off adjustment. Given the unsettled nature of markets and investors’ concerns that Chinese stocks have further to fall, it is hard not to be concerned that markets will remain unsettled and that downward pressure on the Chinese currency will persist.

"The outlook remains for a gradual and modest increase in [U.S.] interest rates beginning before the end of 2015."

The impact on the United States also depends on what other countries do in response. If countries such as Japan and South Korea depreciate their currencies as a reaction to the Chinese move, the overall strengthening of the dollar—adjusted for country trade weights—will be much sharper, and the macroeconomic effects, such as a hit to U.S. exports, much more significant.

What matters more than the direct trade effects of depreciation is the effect of the market turmoil on general financial conditions—through stock-market declines, tighter lending standards, and reduced confidence. But given the volatile nature of such markets, these effects are hard to predict.

What we have seen so far shouldn’t cause too much friction. The devaluation has been modest, and it appears motivated by domestic problems rather than a desire to gain an international competitive advantage. But a lot depends on whether the currencies of other major trading partners follow the renminbi and become weaker.

What are the implications of Chinese market instability for Chinese President Xi Jinping’s state visit to the United States in September and for U.S.-China diplomatic relations?

The recent turmoil, coupled with reports that the Obama Administration is considering levying sanctions on Chinese companies for cybercrimes, has upped the ante for September’s state visit and even led to some calls that the visit be postponed. The administration has shown impressive restraint in its response to China’s crisis, but the president will look for assurances that exchange-rate depreciation will not become the easy alternative to fundamental structural reform. President Obama will also seek concrete advances on the trade challenges that confront the two countries in areas such as cybersecurity, intellectual-property rights, and government procurement and investment rules.

How does this change the outlook for the Federal Reserve’s potential raising of interest rates in the fall? Is more quantitative easing (QE) back on the agenda?

Statements from Federal Reserve Vice Chairman Stanley Fischer at the Fed’s annual Jackson Hole conference, as well as from other senior officials, have signaled that the Fed remains on course for a liftoff in rates later this year. The decision will be data dependent and based on a forward assessment of inflation—as was the case before the China turmoil—and it is likely that, as of now, the Fed remains internally divided on whether to move at their September 16–17 meeting. A divided Fed committee could decide to wait to see if market turmoil continues and market moves intensify deflationary pressures. But the outlook remains for a gradual and modest increase in interest rates beginning before the end of 2015. And with the U.S. economy growing solidly, the chances of a new round of QE is remote.