Skip to main content
How Disruptive Is Russia’s Ruble Dive?

The combination of sliding oil prices and stiffening sanctions has contributed to an alarming plunge in Russia’s ruble and the government’s options for responding are dwindling, says CFR Senior Fellow Robert Kahn. The looming crisis does create an incentive for Russia to find a negotiated solution to the ongoing conflict in Ukraine, Kahn says, but the prospects for compromise remain hard to predict. Meanwhile, Kahn argues it is unlikely that the ruble troubles will spur meaningful domestic reforms in Russia. "I suspect the focus will be, instead, on trying to bolster the ruble through intervention in foreign exchange markets and tight monetary policy, supporting economic activity through fiscal stimulus measures, and limiting capital flight," he says. 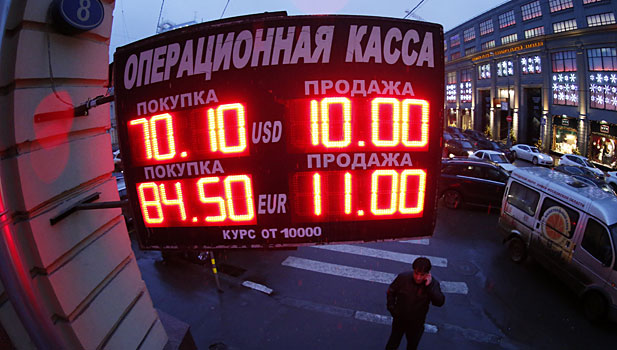 The ruble plunged more than 11 percent against the dollar on December 16, 2014. (Photo: Maxim Zmeyev/Courtesy Reuters)

Is the ruble plunge a product of dropping oil prices, Western pressure and sanctions, or all of the above?

All of the above. The decline in oil prices has had a devastating effect on an already weak Russian economy and is the main driver for recent market pressures. With oil and gas representing roughly two-thirds of Russian exports and about half of government revenue, a failure to diversify has left the economy highly vulnerable to any downturn in global energy prices. But sanctions are a force multiplier. Western sanctions have taken away the usual buffers—such as foreign borrowing and expanding trade—that Russia relies on to insulate its economy from an oil shock.

Over the past several months, Western banks have curtailed their relationships in Russia, pulling back on lending and creating severe domestic market pressures. In fact, it was the news that the central bank would rescue a major Russian energy firm that apparently triggered the most recent round of turmoil.  Meanwhile, trade and investment have dropped sharply, limiting the ability of the Russian economy to adjust to shocks. Russia could perhaps have weathered either an oil shock or sanctions individually, but not both together.

The central bank has already hiked interest rates to 17 percent. What options remain for policymakers if this has little effect? Can the government afford to continue defending the ruble?

I don’t think further rate hikes would be helpful in the current environment. Central bank intervention has produced a short-term bounce, but that isn’t enough by itself. However, I expect the government to continue to intervene in hopes of stabilizing the currency, while also providing financial support to those hardest hit by the depreciation. This might include providing liquidity to banks and fiscal subsidies to both corporations and households.

Should those measures fail, I expect capital controls to be the next step, even though historically such controls have not been effective in Russia – evasion is simply too easy. But they need to do something.

What impact, if any, would a sustained financial crisis have on Russia’s ambitions in eastern Ukraine? Would its leaders be more likely to compromise with the government in Kiev to alleviate Western sanctions?

I don’t pretend to know President Putin’s mind, but the crisis does promise strong economic and political payoffs to finding a negotiated solution with Ukraine.  In the meantime, Western states  and other partners have to come up with substantial additional assistance for Ukraine—on the order of $15 billion, according to the IMF—to help that country weather its own crisis. That would be on top of the roughly $25 billion in bilateral and multilateral assistance approved in May of 2014 that was supposed to fund Ukraine through mid-2016.

In 1998, Russia, under President Boris Yeltsin, saw a 70 percent collapse of the ruble and falling oil prices, which led to that year’s full-blown financial crisis. What lessons should Russia, as well as international investors, take away from that experience?

Conditions in Russia and the global economy were much different in 1998, so we should be careful not to draw too many conclusions from that period. Then, global financial markets were dealing with the legacy of the 1997 Asian financial crisis and other distress in major money markets. Additionally, the fact that sanctions have caused Western financial institutions to pull back from Russia means that the West is less leveraged, less interconnected, and therefore less vulnerable to contagion than was the case in 1998.

Nonetheless, that searing experience with hyperinflation still resonates with the Russian public, and the government has reason to be nervous about the recent spike in inflation. History also reminds us of the fragility of confidence: when crisis does strike, exchange rates will move far and fast.

Does the threat of crisis improve the prospects for the difficult structural reforms necessary for Russia to diversify its economy and move toward one with less corruption and fewer monopolistic tendencies?

Yes and no. Economists often argue that we can’t let a good crisis go to waste, and some will call for "shock therapy" to jump start the very difficult structural reforms needed for Russia to sustain higher growth. However, I am skeptical that this government has the commitment needed to make a major course correction in policy. In particular, the current regime looks unwilling to step back from its distortive involvement in the economy and its heavy-handed state control over national resources.

I suspect the focus will be, instead, on trying to bolster the ruble through intervention in foreign exchange markets and tight monetary policy, supporting economic activity through fiscal stimulus measures, and limiting capital flight.  Ultimately, this could mean greater intervention in the economy, not less.