Skip to main content
How to Influence a Polarized Egypt

Deepening polarization between Egypt’s Islamists and secularists "lays the groundwork for a sustained confrontation and period of unrest," says Jon B. Alterman, a leading expert on Egypt. He says one of the major policy challenges facing the United States is the shared view amongst Egyptian generals that the United States is "fundamentally naive about how politics work in the Middle East." Alterman says the United States should reassess its policy toward Egypt with an eye toward the long view. "I don’t think we have figured out what it our objectives are, and that has gotten in the way of figuring out what our policy should be," he says. 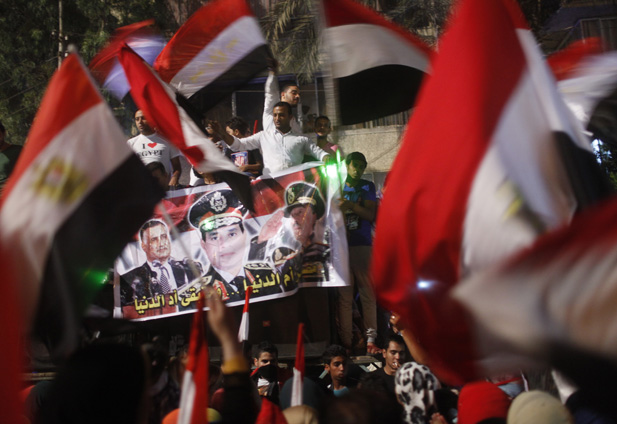 Protesters cheer with Egyptian flags and a banner of army chief Abdel-Fattah El-Sisi, seen between former presidents Gamal Abdel Nasser (R) and Anwar Sadat, as they gather for a mass protest to support the army in front of the presidential palace in Cairo on July 26, 2013 (Asmaa Waguih/Courtesy Reuters).

This past weekend, we saw a culmination of the six weeks of unrest and tension in Egypt that started with the overthrow of President Mohamed Morsi in early July. How would you describe the situation in Egypt?

More From Our Experts
Martin S. Indyk
Master of the Game

There’s a growing polarization, with a larger number of people supporting the government and a significant minority thinking that the government is usurping power from legitimately elected leaders. Where this seems to be going is that each side is challenging the very legitimacy of the other. That lays the groundwork for a very sustained confrontation and period of unrest in Egypt. The strategic concern is that Egypt’s political path is going to be incompatible with its desired economic path, and that a country that is suffering from internal unrest is not a country which can attract foreign investments or attract millions of tourists every year.

The United States, a major ally of Egypt since 1978, seems to be reassessing its relationship in light of recent developments. President Obama cancelled joint military exercises last week and is holding up some military deliveries. What should the United States be doing right now?

"The strategic concern is that Egypt’s political path is going to be incompatible with its desired economic path."

What our policy should be depends partly on what we’re trying to do in the immediate term. If the goal is to change the actions of the military leadership this week, that’s a tall order because people feel the stakes are so high. If the goal is to send a message to other countries in the Middle East, that takes another set of policies. If the goal is to re-balance so that in three, five, or ten years, we have the relationship we want with Egypt, that’s another strategy. If our goal is to make ourselves feel like we’re in the right moral position, then that requires a fourth strategy. I don’t think we have figured out what it our objectives are, and that has gotten in the way of figuring out what our policy should be.

More From Our Experts
Martin S. Indyk
Master of the Game

Some people would say the most immediate issue should be to preserve the Egyptian-Israeli peace treaty, which has prevented another Middle East war involving Israel.

"When the military comes down hard in one direction or another, there is a strong instinct among the Egyptian public to support it."

It’s a very important issue, and it’s easy to see this in the wrong way. I don’t think what we’re going to have is hostility between Egypt and Israel in the near term. The Egyptian military is comfortable with a strategic relationship with Israel; it cooperates with the Israelis on many levels. But it’s easy to miss the fact that the United States has played a sustained, lubricating role in this relationship. The United States has consistently played a role to make this relationship work, and it’s been able to do that because it has intimate ties with both parties. If the United States doesn’t have an intimate tie with Egypt, this will make for a bumpier relationship. I don’t think it will turn to hostility but it will be a relationship of greater tension, and it will be a relationship in which Israelis have less confidence then they have right now.

How much influence does Washington have in Egypt and in the Middle East right now with the Arab leaders?

Who holds these views? People like the Saudi leaders?

The Saudis, the Emiratis: Both are in close communication with General Sisi [Gen. Abdul-Fattah el-Sisi]. General Sisi was the Egyptian military attache in Saudi Arabia and has very close relations with the Emiratis as well, and it’s not a coincidence that a week after he took power there were $12 billion in pledges from Kuwait, Saudi Arabia, and the UAE. It makes the U.S. effort to influence the Egyptians all that much more difficult, because not only do the Egyptians feel that they have to concentrate on what’s immediately in front of them, but they don’t trust the judgment of the United States to help them.

The reporting suggests that there was some cooperation between a civilian movement, wealthy businessmen, and elements of the security apparatus (which includes both the military and the internal security service). How that actually worked is unclear, but there certainly seems to be quite concerted support by elements of the business community for the current military effort, and there seems to be significant support from security services for the effort as well.

The public seems to still support the military takeover. Why?

Partly there’s a unity of message coming through the state media organs and many of the independent media organs in Egypt. There are a range of Egyptian satellite television stations, which are owned by wealthy local businessmen, and they have closed ranks behind the military. The other very important piece though is the military has a rather remarkable status in Egypt as an institution that is universally admired, that is not questioned. And when the military comes down hard in one direction or another, there is a strong instinct among the Egyptian public to support it.

How would you describe the standing of the Muslim Brotherhood? Who are its members?

The Muslim Brotherhood as an organization tends to be a middle-class organization. It’s not disenfranchised; it’s not uneducated, it tends to [draw] aspiring professionals, many of the people who in any society get involved with religious movements. These are not people who are out of society; these are people who believe they are climbing up within society. Whether the Brotherhood has 20 or 30 percent support is unclear, but they seems to have significant, enduring support that isn’t likely to go away.

The other interesting thing, which nobody has really been talking about, are the Salafi movements in Egypt. In many ways, they have ideological differences with the Brotherhood, they have different international support than the Brotherhood, and the Salafi groups have been careful not to condemn the government and not really to condemn the Brotherhood. When General Sisi talks about the role of Islamists in politics, the signal he’s sending is not that the Brotherhood would be allowed back into politics, but that the Salafis could represent the Islamist voice in politics. And when you’re talking about a country in which repeated polling shows that 60 percent of people think Sharia should be the law of the state, having the Islamist vote is not trivial. What the long-term result of all of this may be is that in an effort to suppress the Brotherhood, the government tries to give the Salafis more influence in social and religious matters [and] that you may end up seeing a much more religiously conservative society in Egypt in ten years’ time.

So the military’s concern with the Brotherhood is not so much about ideology as it is about politics?

A lot of it has to do with politics, and the Brotherhood as a membership organization with a hierarchy that is perceived to be a political threat because it seems exclusive. What Morsi did in his year in power is that he continued to play to his base rather than try to expand his coalition. So what the military fears is a narrow political group capturing Egyptian politics ultimately at its expense.

What about the reports of the attacks on the Coptic Christian churches in the countryside.

What is clear is that this is deeply polarizing the country as it contributes to a narrative that the Brotherhood is a terrorist group which is not a legitimate partner in any political settlement in Egypt.

Recent events are straining the global watercourse governance system. Countries need to articulate and abide by universal norms and standards on sustainable and equitable water resource use to secure safe access to water.

Sisi Has His Own Jamal Khashoggi

It’s time to hold Egypt accountable for the U.S. citizens it has unjustly victimized.

Colin Powell’s extraordinary career as a soldier-statesman provides a model for how to live one’s life in the public arena at a time few such models can be found.