Skip to main content
How to Respond to Ukraine’s Crisis?

CFR President Richard N. Haass says it is crucial at this stage in the Ukraine crisis to avoid making a bad situation "worse and more dangerous." The preferred goal, he says, is for a Russian withdrawal of forces from Crimea, which might come in exchange for a role in an economic package for Ukraine and some protection for Russian speakers. In the absence of de-escalation, Haass suggests steps such as allowing the export of U.S. oil and natural gas to replace reliance on Russian imports; providing military assistance to Ukraine’s neighbors, such as Poland; and stepped-up planning for a package to strengthen Ukraine, potentially in collaboration with Europe and NATO. 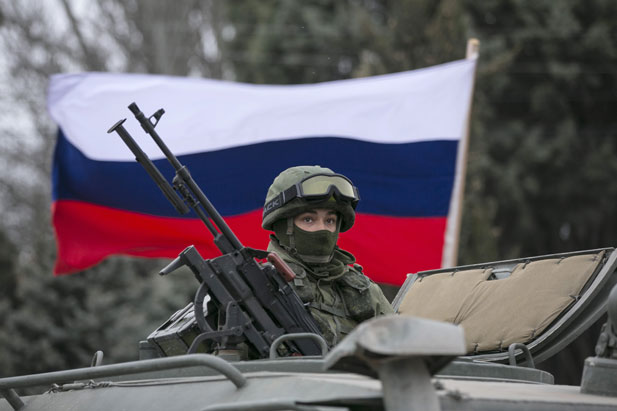 An armed servicemen in front of a Russian flag outside a Ukrainian border guard post in the Crimean town of Balaclava. (Photo: Baz Ratner/Courtesy Reuters)

We have an old-fashioned, sort of Cold War crisis right now in Ukraine, with Russian forces surrounding Ukrainian military outposts in Crimea. President Obama is sending Secretary of State John Kerry to Kiev, the Ukrainian capital, to boost the morale of the Ukrainian government. Where do you think we are right now?

We don’t know if Russian president Vladimir Putin’s grab, if you will, of Crimea is meant as a face-saving compensation for the fact that he and former Ukrainian president Viktor Yanukovich effectively "lost" the bulk of Ukraine. A second possibility is that he’s using it as a bargaining chip as a way of trading the Russian position in Crimea for a chance to get back into the larger politics of Ukraine. A third possibility would be that he sees the situation in Crimea as a stepping stone, and he is prepared to either take advantage of possible violence or even foment it to use it as an excuse to expand Russia’s foothold throughout the country. So at this point, the situation could play any one of those three ways.

Obviously, from the point of view of the United States and most of the world, the preferred goal is to see the Russians be persuaded to leave Crimea in exchange, say, for some participation in an economic package and some protection for Russian speakers. Failing that, the option would become one of trying to limit the Russian hold on Ukraine to Crimea, where by treaty they already have their Black Sea naval base. What we want to obviously avoid is something that takes this already bad situation and makes it both worse and more dangerous.

Putin has said that the breakup of the Soviet Union was a major geopolitical disaster of the twentieth century. Do you think Putin is looking to get back some of the lost Soviet republics?

It would seem that there is something of a Putin doctrine, which is to intervene where Russian speakers believe they are in a vulnerable position. He did it in Georgia, and he’s done it again in Crimea. It’s not the full reconstitution of the old Soviet Union, but it represents more than acceptance of a small Russia. What we don’t know is how much is simply tactical or how much may be strategic; and again, he does have the advantages of proximity. And for the United States and the West, it complicates fashioning a response, as does the internal disarray in places like Georgia or Ukraine. One of the things we need to do now is fashion a generous economic package for Ukraine. Fleshing out the details and then having confidence that the terms of such a package will actually be implemented is no easy thing.

In a way, the Americans rely on the Russian government for help in other parts of the world: for the ongoing P5+1 (United States, Britain, Russia, China, France, and Germany) negotiations on Iran’s nuclear program, and also efforts to bring about peace in Syria, or at least getting chemical weapons out of Syria. And the United States would like Russian help in getting North Korea back to the negotiating table. It’s a very complicated situation, isn’t it?

"Whenever you have a crisis like this, it’s important to take a step back and recognize that you’re dealing with a square on a chessboard and not the entire board."

You’re exactly right. Whenever you have a crisis like this, it’s important to take a step back and recognize that you’re dealing with a square on a chessboard and not the entire board. And it’s simply a consideration. So when the United States understandably reaches for political and economic sanctions against Russia, or simply responds to what it’s done in Ukraine, we have to keep in mind two things: One is that, as you suggest, we have other interests and equities out there in the world, which, for better or worse, Russia can affect. You mentioned Iran, Syria, and North Korea. Secondly, we have to balance our desire to see a rollback of the Russian position with our desire not to see the situation escalate. And this, to some extent, constrains U.S. freedom of action.

President Obama is really constrained, isn’t he? No one is really asking him to use military force?

For good reason, no one is asking the president to do that. But there are things the United States can and should consider doing beyond, say, suspending Russia from the G8 or sending the secretary of state to Kiev. Let me suggest a few. One thing we ought to do is allow the export of American crude oil, as well as expand the export of American natural gas. In particular, we should make gas available to countries such as Ukraine that we want to see weaned from their dependence on Russia. The U.S. energy transformation of recent years gives us options we didn’t have several years ago. So we ought to explore using those options.

Secondly, there’s a lot of sense to proposals that the United States provide certain types of military assistance to some of Ukraine’s neighbors, such as Poland, in the form of missile defenses. Thirdly, I would at least do the thinking and the planning for what a package of intelligence and military help to Ukraine might be. If it looks like the Russians are tempted to expand their foothold in Ukraine beyond Crimea, in particular, beyond the south and east of the country, what might the U.S.—or more broadly, European and NATO—options be to strengthen Ukraine? That’s something we ought to be looking at as well.

NATO itself hasn’t really done anything. They have only issued a statement by the secretary general.

There’s an argument for not inserting NATO in the middle of this. Obviously, Ukraine is not a member of NATO, and by putting NATO in the middle of this, we would be in some ways reinforcing the notion that that’s where this crisis is heading, and that’s in no one’s interest. Such mechanisms as the OECD and the Partnership for Peace ought to be used far more prominently than they have been. Thus far, Ukraine is a member of the Partnership for Peace, and there are things that we can and should do with it, without bringing in all the symbolism and the obligations of NATO.

Putin himself has not yet said much publicly. Everything has been done through his spokesmen. He’s spoken privately to many officials, but has not made any major speeches.

That is a good point, and it reinforces my sense that we don’t know what his tactics are or what his strategy is. To what extent is this a plan, and to what extent is this an improvisation and largely a reaction to the rapid deterioration of the Russian position in Ukraine? The fact that he hasn’t said things that have locked him in is, to me, a glimmer of hope. And again, one thing it suggests is we shouldn’t give up on—however skeptical we are—the idea of negotiating something of a return to the status quo ante, where Russian troops would leave and you would have some kind of a joint Russian, EU, U.S., IMF economic package for Ukraine, which among other things would include some protections for the Russian speakers in Crimea and eastern Ukraine. That might be a long shot given where we now are, but I certainly would not give up on that kind of an outcome at this point.