A longtime expert on Iranian nuclear development, David Albright, says the six-month agreement reached in Geneva accomplishes a "tremendous amount" but the sides still face steep challenges in settling long-term issues. Most notable, he said, were Iran’s agreement to eliminate uranium enriched to 20 percent and not to stockpile new centrifuges during the interim period. But tough future sticking points include how many centrifuges Iran should be permitted to retain—the United States might want to limit Iran to five thousand and Iran might want twice that number—and how long the next stage agreement should last. 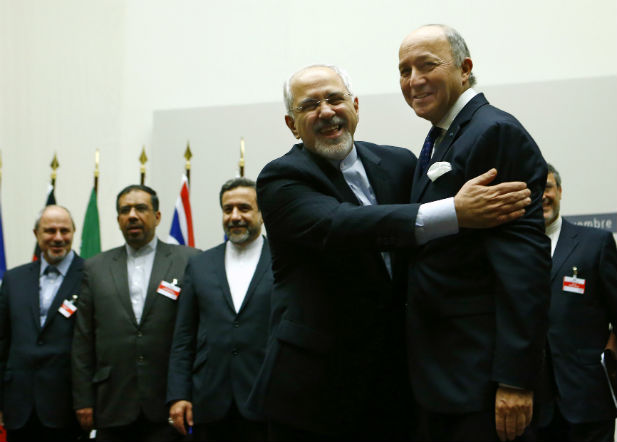 What is your analysis of the agreement reached by Iran and the P5+1 nations?

The deal in the short run accomplishes a tremendous amount. In the long run, a lot of work has to be done and a lot of issues have to be settled. In this first six-month period, the deal reduces the risk posed by Iran’s nuclear program and in that sense, it accomplishes the goal of buying time to get down to the negotiations of the more substantive, harder issues. So it’s balanced. The deal has great potential and it removes some of the imminent risks posed by the Iranian nuclear program, at least for six months.

One of the most positive aspects of this is it tries to eliminate the most dangerous stock of enriched uranium and that’s the stock of 20 percent–enriched uranium in the hexafluoride form that’s used in the gas centrifuges. That stock has been increasing over the last couple of years and has continued to increase until today. That would allow Iran, if it decided to break out, to further enrich it up to [90 percent–enriched] weapons-grade uranium more quickly than if they had to start with 3.5 percent enriched uranium or natural uranium.

That stock under this deal will be eliminated through half being diluted and half being converted into oxide form. If it’s in oxide form, it has to be reconverted back into hexafluoride before it can be used in centrifuges. That stock of 20 percent oxide could not be used in a breakout scenario.

So that’s the most significant thing.

Another one that’s very important, and this was a surprise to many people, is that Iran agreed it would not stockpile centrifuges during the six-month period. It’s agreed to limit its manufacturing of centrifuges to replacing broken ones in the existing enriching centrifuges at Natanz and some at Fordow. And moreover, the International Atomic Energy Agency will be able to monitor two key parts of the centrifuge-manufacturing complex to make sure that centrifuges aren’t being made. One is called the rotor, the spinning part of the centrifuge, a very sensitive part. They’ll be able to monitor about five locations in Iran where these rotors are actually made.

The IAEA will also monitor where centrifuges are assembled in Fordow and Natanz. And the IAEA will be looking there to make sure centrifuges are not assembled. That’s a significant agreement that has escaped much public notice. They’re also going to freeze essential construction at the heavy water plutonium-producing reactor at Arak. This reactor can give another path to nuclear weapons. Iran has agreed that it will not install any more components into the reactor and it will not make fuel for the reactor.

That was a very important set of conditions to get because Israel had threatened to bomb the reactor. And this would at least allow the situation to be more or less frozen for six months and buy some time. And there’s a whole other set of conditions that aim to provide transparency of the Iranian nuclear program. Some of those conditions that were accepted by Iran were taken literally from what is called the "Additional Protocol," which everyone wants Iran to ratify and implement. It gets to something that’s also needed for transparency, which is that the IAEA would also know what’s going on in each building at each nuclear site. Right now they don’t have that.

Are there drawbacks in the agreement? What is it that the Israelis think is so bad?

A simple one would be Iran can continue its research and development of centrifuges. Places that work on the development of centrifuges will not be affected. Nothing is being dismantled. All of these steps in the interim deal are reversible. The United States emphasized that the sanctions that will be loosened are reversible. Iran wants to make sure that whatever happens on the nuclear concessions can be reversed. So for example, the construction Arak could restart. They could start making fuel again. One thing that is important to remember, though, is that things like extending breakout time by reducing the stocks of the 20 percent hexafluoride form—those are just gains. Iran can start making 20 percent again, but we can buy time.

The designers of this interim agreement did not intend to do anything beyond an interim set of steps, so if there’s going to be destruction of centrifuges, that’s going to be in the long-term deal. It’s important to remember that there’s two parts to this—one in the interim, which is what has been most talked about, but then the other part is, what is the long-term comprehensive deal going to look like, and that’s where the discussion of how many centrifuges get destroyed enters the picture.

To me it’s unusual to have an interim deal. Most arms control agreements have a permanency about them.

The way I understand it is they’re far from settling the most significant issues. Iran and the United States look at these things very differently and so the idea was to try to create an interim deal that would remove some of the pressures or urgency of trying to stop Iran and buy some time to then sit down and try to resolve these issues. There are some requirements put on Iran in the sense that you have the interim deal set up for six months with constraints and concessions that are mostly reversible. Then you have the long-term deal that would emerge.

[But] Iran is going to have to settle with the IAEA in the sense that the IAEA has had many concerns that Iran in the past had a nuclear weapon–organization program that it has denied. There’s concern at the IAEA that some of these nuclear weaponization activities have continued, almost to today. And in this deal, there’s a mechanism that links to what’s going on between Iran and the IAEA and this P5+1 track. U.S. officials have said that Iran is going to have to settle or deal with the IAEA concerns before there will be a comprehensive deal.

So from your point of view, on the whole, this is not a bad agreement?

Whether it’s good or bad will depend on whether the long-term issues are settled. And these are critical. Iran has, importantly, not been granted the right to enrich uranium. That’s just been rejected flat out by the United States, and the P5+1 have gone along. But one of the things that has to be settled is, what is the centrifuge program going to look like. And there have to be agreed parameters on how many centrifuges Iran can have, how long these limitations last, the size of enriched uranium stocks, and what kind of transparency there will be.

There is a whole set of conditions Iran will have to accept on its program and obviously they’re going to try to create the most minimal conditions possible. But the United States is going to be trying to [achieve] very significant concessions. [For instance] Iran now has ten thousand enriching centrifuges. Well, maybe it should be fewer than that, [perhaps reduced to] five thousand or six thousand. That’ll be hard to get but it’s the kind of thing that’s necessary.

Iran, on the other hand, may think, "We have eighteen, nineteen thousand installed centrifuges and we want to keep those and cap it at that level." And that’s going to be a very intense debate. There’ll be intense debate over how long those limits last. Three to five years is meaningless. Twenty years would be significant, a whole generation where a cap would be in place and where limitations would be in place. And you can guess who supports which. The hard work remains to be done and that’ll determine whether this deal is successful or not.