The United States and its negotiating partners still must overcome substantial differences with Iran in talks over its controversial nuclear program, but a comprehensive agreement with Tehran before a July 20 deadline is likely, says Iran expert Suzanne Maloney. The major issue looming over the deliberations is "breakout timelines," she explains. "This all gets into the question of how quickly Iran might be able to race toward nuclear weapons capability if it chose to do so—either overtly by breaking an agreement, or covertly while the world continued to believe that Iran had somehow been constrained." Meanwhile, she worries that some Iranian hard-liners may view the sectarian crisis unfolding in Iraq as a negotiating chip in the nuclear talks. 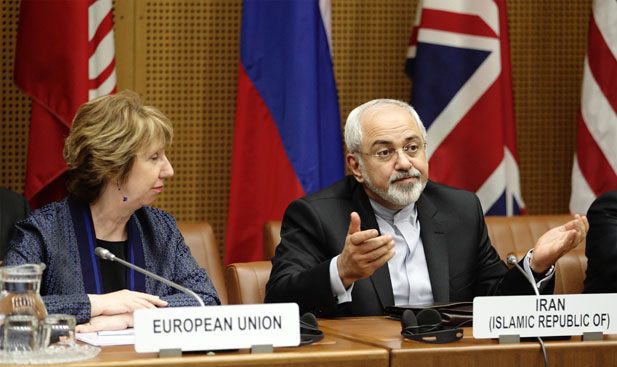 The negotiations that have been going for several months between the so-called P5+1 nations [the United States, Britain, France, Russia, China and Germany] and Iran over its nuclear program are now reaching a sort of denouement. They will resume again on July 2, and they’re supposed to end by July 20, although they can be extended another six months. Do you think they will reach a deal before the deadline?

We are really at a crunch point, and my own estimate is that we will come to a comprehensive agreement with Tehran on its nuclear program prior to the July 20 deadline. It remains to be seen how the negotiators are going to work through the substantial differences that remain. And it really does all come down to the issue that has bedeviled this negotiation: the question of enrichment within Iran and how much is considered acceptable from the perspective of the international community, and concerns about Iran’s ability to push toward a nuclear weapon.

In other words, the issue is how many nuclear centrifuges Iran can keep?

There are a number of sticking points at this stage, but the issue of centrifuges is where the two sides appear to be very much dug in.

Yes, although less than half of those are actually operational. But the issue is breakout timelines and how many centrifuges can remain operational, at what level, what type of centrifuge, and to what extent Iran can continue to manufacture and do research on centrifuge capabilities.

This all gets into the question of how quickly Iran might be able to race toward nuclear weapons capability if it chose to do so—either overtly by breaking an agreement, or covertly while the world continued to believe that Iran had somehow been constrained. This is the ultimate question that American negotiators and their partners in the P5+1 are attempting to deal with. In short, [they want] to create a system through which the world can have some degree of confidence of what Iran is doing with respect to its nuclear program and detect any attempt to rush toward a nuclear weapon.

And you are confident that they will make a deal by July 20?

I am confident that a deal will be struck in part because the Iranians, in particular, have invested so much in this process to date. They pushed forward with the negotiations in the very days after the election of President Hassan Rouhani, by appointing a team that was empowered to make major decisions on what had always been a very sensitive issue, and then by agreeing to this interim accord that brought the Iranians very little in terms of sanctions relief and really did incorporate some significant concessions with respect to the nuclear program.

To walk away from this process now would bring the Iranians nothing but political trouble at home and would not fundamentally help them in the one area that has provoked their interest in negotiations, which is the health of their economy.

Obviously, the Obama administration and its partners in the P5+1 are also very invested in getting to a diplomatic resolution of this issue. Certainly no one in Washington is eager to see the prospect of another military conflict in the Middle East, but I think it’s the Iranians who are hungrier at this point simply because the economy needs the sanctions relief.

Now there have been concessions made by Iran apparently over this Arak water reactor and a few other areas?

Yes, they appear to have found a formula for dealing with the heavy water plant at Arak as well as the Fordow underground facility. Those will probably be compromises that are not considered ideal from the perspective of those that worry about Iran’s proliferation tendencies, but they are certainly far preferable to leaving those facilities wholly unchecked or in their current state. But the real area in which there continues to be some significant distance is centrifuge numbers and the size and scope of the program.

Talk about the politics here. Would an agreement on the nuclear issue open the way to a possible normalization of relations between the United States and Iran?

I don’t think we are anywhere near normalization of relations between the United States and Iran. This is in part because neither side has a compelling political interest in altering the context of their relationship. A nuclear agreement would be a very important arms control agreement, but it wouldn’t change the competing interests between the two countries and the conflict between the ideology of the Islamic Republic and that of Washington and the broader Western world.

What we are seeing with respect to the nuclear agreement is extremely important and would be a major step forward. It would inevitably open up channels for additional dialogue on other issues, but it’s quite clear from the statements of Ayatollah Ali Khamenei, the Supreme Leader of Iran, and other senior leaders within Iran that the political climate there is not one in which they envision a warming of relations between the two countries—at least not at this time.

Iran is a country that is constantly in flux. If we are able to sustain an agreement on the nuclear issue, anything is possible in its aftermath. But I don’t think it’s inevitable, and I don’t think at this stage that the Iranians are looking to change the tenor of the relationship.

At the time the [Islamic State of Iraq and Greater Syria] started its incursion into Iraq, Secretary of State John Kerry was saying he’d be willing to test the diplomatic waters with Iran. And there were some discussions with the Iranians outside the nuclear talks, briefly, but nothing really came of that, right?

For the most part, the Iranian security establishment has insisted they are not interested in that kind of dialogue. That said, it’s inevitable that as U.S. involvement in Iraq’s crisis deepens, and as Iran is involved in a very substantial way in trying to buttress the [Nouri al-] Maliki government’s capability to fend off the attackers, that there will be some kind of channel open between Tehran and Washington, at the very minimum to deal with the efforts that are taking place in parallel.

The interests of Iran and Washington are not identical in Iraq, but there is a considerable degree of overlap, both in their disinterest in seeing any further ground gained by ISIS or other takfiri terrorists, but also their interest in seeing some kind of stable outcome and territorial integrity remaining within the state of Iraq.

We’ll just have to see how that plays out, I guess.

The interesting part for me is the timing on all of this. It really does come at a difficult moment with respect to the nuclear issue. I worry that some Iranian hard-liners may see the situation in Iraq as potentially additional leverage for their position on the nuclear issue, despite the fact that there will be no explicit or even implicit quid pro quo between the two issues.

If I were sitting in Tehran, I would be more hopeful about sanctions erosion and the ability for Iran to rehabilitate itself even outside a nuclear agreement, given what’s happening on the ground in Iraq. I don’t yet see that playing out yet within the nuclear dialogue.

And, of course, with this being an election year for the U.S. Congress, there will be a lot of rhetoric coming up this fall if there is no agreement reached in July.

In speaking with people in the [Obama] administration, I sense a certain fatalism that they will be damned if they do get an agreement, and damned if they don’t. There is also a sense of real conviction that what the administration is trying to do is the best possible outcome for a very long-standing and intractable problem. So there is a willingness and a determination to move forward, irrespective of what kind of trouble-making or backlash we might be seeing from Congress.

There is also conviction on the part of U.S. officials that the efforts to negotiate a resolution to the nuclear crisis with Iran is consistent with the preferences of the American people, who are deeply disinclined at this point to engage militarily any further in the Middle East.