Skip to main content
Is It Too Late For Libya?

Three years after the fall of Muammar al-Qaddafi, Libya is unraveling at a pace and scale few analysts expected, says Mary Fitzgerald, a Tripoli-based journalist. She says the violence which teeters on the brink of civil war, is rooted more in regional, economic, and social cleavages than religious differences. "Libya’s crisis is too often reduced to a narrative of Islamist versus non-Islamist," she explains. "It’s less an ideological battle than a scramble for power and resources." Meanwhile, she says that international efforts to stem the crisis, which are often viewed suspiciously in Libya, have achieved little. 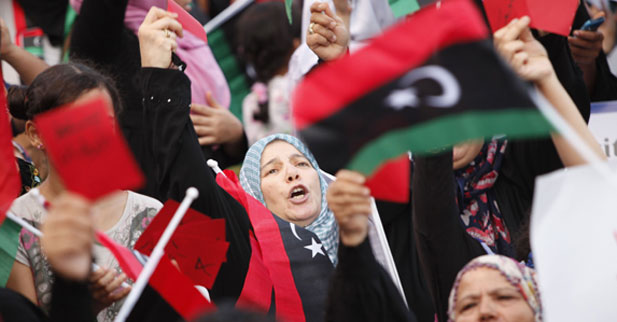 There are constant reports of violence in Libya. How bad is it?

Libyans talk of their country being at its most serious juncture since the uprising against Muammar al-Qaddafi in 2011. The scale and speed of the unraveling this summer has taken many by surprise. The ensuing power struggle has deepened polarization not just in the political sphere but also on the street, and even within families. Many Libyans fear their country could tip into civil war.

Libya’s crisis is too often reduced to a narrative of Islamist versus non-Islamist. It’s less an ideological battle than a scramble for power and resources anchored in regional, economic, and social dynamics. While ideology matters to a minority, it is not the main driving force, though elements on all sides have an interest in spinning such narratives to rally their respective bases.

Each of the two main camps pushes its own narrative: militias from the prosperous port city of Misrata, who comprise the most powerful fighting forces in the country, and their allies (which include Islamist groups even if the Misratans are predominantly not Islamist) contend they are routing an attempted counterrevolution orchestrated by figures linked with the former Qaddafi regime. Meanwhile, their rivals in the conservative western mountain town of Zintan, who are aligned with anti-Islamist political and armed currents that support the parliament in Tobruk, claim to be resisting an Islamist takeover.

The words "Islamist" and azlam (meaning remnants of the former regime) are used to smear political opponents on either side. Of more significance is the rivalry between regions—including Misrata versus Zintan (an inland city southwest of Tripoli)—and the contest between elites that prospered under the former regime and the new elites that grew out of the 2011 revolution.

The United States, which of course helped overthrow Qaddafi in 2011 through NATO air attacks, has evacuated its embassy in Tripoli and is currently focused on defeating ISIS forces in Iraq and Syria. Have the major powers just washed their hands of Libya?

Many Libyans have that perception and regularly complain that international actors did not engage enough in the crucial aftermath of Qaddafi’s ousting. As Libya’s crisis grew in recent months, there was a stepping up of international engagement. In a flurry of diplomacy, several countries, including the United States, appointed special envoys, but there is little to show for it so far. The UN retains a support mission in Libya (though its staff evacuated during the recent fighting in Tripoli) and its newly appointed head, Spanish diplomat Bernardino León, has been trying to initiate dialogue to break the political impasse. But similar efforts in the past have foundered due to the perception that the UN and certain countries with significant interests in Libya are playing favorites.

You have written that there are "two loose camps" in Libya, one that supports the internationally recognized House of Representatives, elected in June, and one that backs its predecessor, the General National Congress (GNC), a transitional parliament in Tripoli created by Libya’s first post-Qaddafi election in 2012. Can you describe these two groups?

Underpinning the new situation in Tripoli is the Misrata-led militia alliance known as Fajr Libya (Libyan Dawn). Dawn became the dominant power in the capital after the Zintan-linked militias, which it battled for control of the main airport, left the city in late August. A rump of the GNC, a body which had become deeply unpopular before the June elections, has been revived. It tasked a failed prime ministerial candidate, university lecturer Omar al-Hassi, to form a so-called "national salvation" government in Tripoli. He has installed his appointees in various ministries. His administration is also supported by a coalition of militias known as the Shura Council of Revolutionaries in Benghazi, Libya’s second largest city. This alliance was formed in June in response to an operation launched by renegade former general Khalifa Haftar, who declared war on all Islamists.

It’s less an ideological battle than a scramble for power and resources anchored in regional, economic, and social dynamics.

The Shura Council includes Ansar al-Sharia, a radical group designated as terrorist by the United States in January. Its members are accused of involvement in the 2012 attack on the U.S. diplomatic mission in Benghazi that resulted in the deaths of the ambassador and three compatriots. While Ansar al-Sharia is opposed to democracy and regularly criticized the GNC during its lifetime, it now supports it due to perceived common enemies, namely Haftar and his allies.

The House of Representatives (in Tobruk), in which Islamists are a minority, is backed by Haftar’s forces, militias connected to a federalist movement in eastern Libya, and armed factions in western Libya linked to Zintan. It appointed a new chief of staff who has urged regular army units to return to service in support of the internationally recognized assembly.

What’s the security situation in Tripoli?

Tripoli feels like a city left bruised and anxious after weeks of militia fighting. Although life is returning—there are traffic police on the gridlocked streets and uniformed school-kids going to class —the memory of what happened last month will remain for some time. Many families who fled the violence have not yet returned. Some fear there may be a counterattack by the Zintan-linked militias. There is little overt militia presence in the city—apart from around government ministries. It is clear that the Libyan Dawn forces and their political cohort feel they need to get the people on their side, but most Libyans are fed up with militia men of all stripes.

Can you describe Libyan Dawn in more detail?

The Dawn coalition is more diverse than much reporting suggests. Misratan units make up the largest component of Dawn and cannot be described as Islamist—indeed the Misratans reject such labelling. Dawn also contains Islamist and non-Islamist militias from Tripoli and several other western towns, as well as a significant number of Amazigh (or Berber) fighters. The latter have historical reasons for wanting to check Zintan’s power in western Libya.

Members of one Dawn faction named the Libya Revolutionaries Operations Room briefly abducted Prime Minister Ali Zeidan in October 2013. Other hardline elements within the Dawn camp kidnapped Egyptian diplomats earlier this year to secure the release of a militia leader arrested in Alexandria.

The Libyan House of Representatives in Tobruk is backed by forces loyal to former General Hiftar Khalifa. Is he someone the United States should support?

The septuagenarian former general announced an offensive against Islamists in May that initially garnered significant support from a population frustrated with insecurity, particularly in eastern Libya where seemingly politically motivated assassinations have been on the rise.

Hiftar has a checkered history in Libya: he led troops during Qaddafi’s disastrous war with Chad in the 1980s and later defected to the United States where he is said to have collaborated with the CIA. In February this year, Hiftar was accused of attempting a coup when he called for the suspension of government and its replacement by a military council. He then slipped away to eastern Libya where he canvassed support from disgruntled former army, police, and militias linked either to powerful tribes or federalists. He dubbed the loose alliance that resulted in an operation called Karama, or dignity in Arabic.

Now, however, his operation in Benghazi is stalling—indeed his allies have been routed from the city and his public support is fraying. When I met him in June, he predicted his operation would take six months, less "with help from friendly countries." It is clear that assistance has not materialized to the extent he had hoped.

The UN Support Mission in Libya had a recent meeting with the various groups in hopes of achieving a cease-fire. Is this possible?

The talks on Monday gathered parliamentarians who have been attending sittings of the House of Representatives and those who have been boycotting the sessions because they believe the decision to move the assembly to Tobruk, deep in Haftar territory, was a political one which violated procedure. But no representatives from the various armed factions were present, which raises doubts over the prospect of a cease-fire anytime soon.

What is it like to live in Libya these days?

I often refer to Libya’s abnormal normal. The increased targeting of activists—including the deadly shooting of two teenagers in Benghazi recently—has sent a chill through civil society. It has driven many into either silence or exile.

But for others life goes on. In Tripoli, where I live, cafes are packed and beaches are filled with picnicking families. Many escape evening power cuts by heading to the beach. Food prices have risen because supply chains were disrupted by the closure of the main airport and also continuing insecurity along certain routes from the border with Tunisia. People complain of traffic jams and queues for fuel, which often involve several hours of waiting. In Benghazi, where I have spent extended periods of time this year, the precarious security situation has not hampered the building of several new shopping malls. Despite everything, Libyans are resilient.