The passing of Singapore’s towering founding father and first Prime Minister Lee Kuan Yew (1923–2015) on Monday marked a turning point for the island nation. Few leaders have shaped a nation as much as Lee did in Singapore, says CFR Adjunct Senior Fellow Karen Brooks. While Lee’s model of economic liberalization serves as an inspiration for many developing nations in the region, Brooks says the country “is sui generis on many levels, making it a difficult act for others to follow.” Acknowledging that Lee’s paternalistic governing style “often translated into a considerable suppression of democratic freedoms,” she says the country’s political system is being challenged by a younger generation of Singaporeans demanding new freedoms. However, the first significant test for post-Lee Singapore will be the country’s next general election, which must be held before January 2017. As for its foreign policy, Brooks says that Washington will continue to seek Singapore’s counsel on matters related to China as well as the region at large. 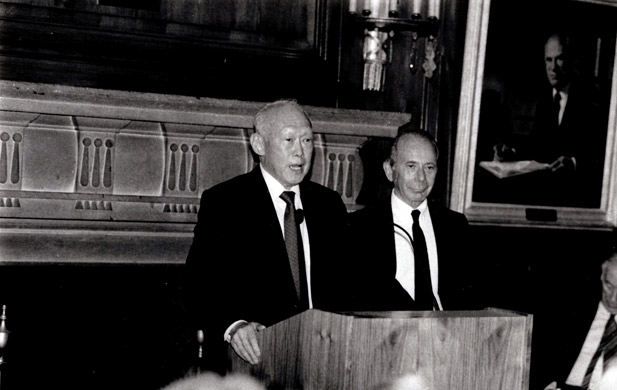 Lee Kuan Yew played a pivotal role in transforming Singapore into an economic powerhouse. How meaningful is his legacy for Singapore and the region?

Few leaders have had as formative an impact on the politics, economy, social structure, and very character and fiber of a nation as Lee Kuan Yew (LKY) did on Singapore.

Not only was he the founding father of Singapore, leading the nation to independence in 1965 after a long period of British colonial rule and a short-lived union with neighboring Malaysia, but he guided the island nation as prime minister for thirty-one straight years—making him the longest serving prime minister in world history. He also exercised significant structural influence on the country for more than two decades after stepping down as the head of government in 1990.

“Few leaders have had as formative an impact on the politics, economy, social structure, and very character and fiber of a nation as Lee Kuan Yew did on Singapore.”

Over the past five decades, LKY steered Singapore from a British colonial backwater to an industrial and financial powerhouse that by all measures has long punched way above its weight on the world stage. It was LKY’s strategic vision and relentless never-take-no-for-an-answer personality that transformed Singapore into what he proudly called a "first-world oasis in a third-world region.” Today, the modern, glitzy city-state of Singapore boasts one of the highest GDPs per capita in the world: $55,182.50 in 2013 compared to $53,042 in the United States, according to the World Bank. If based on purchasing power parity, Singapore’s GDP numbers are even more impressive, registering $78,763.40 compared to the United States’ $53,042.

In engineering this miracle, the nation LKY built came very much to reflect the man: disciplined, industrious, pragmatic, straight talking, and always ahead of the curve. Singapore’s spectacular success generated some tension with its neighbors from time to time, but it also proved to be a source of inspiration for the region and helped drive ASEAN [the Association of Southeast Asian Nations] into the vibrant economic grouping it is today.

Singapore is a tiny, predominantly ethnic Chinese city-state with no natural resources, surrounded by larger, predominantly Muslim, and not entirely friendly resource-rich nations. LKY often cited Israel as his inspiration for overcoming such circumstances, saying that like Israel, Singapore had to leapfrog over the rest of the region by becoming a leading destination for international investment. LKY opened Singapore’s doors to foreign companies, made English the language of business, invested heavily in the nation’s infrastructure, and became a major manufacturing center with one of the world’s busiest ports.

As other nations joined the low cost manufacturing bandwagon, LKY invested heavily in education and upgraded the skills of his workforce in order for Singapore to move up the value chain. And move up they did. Singapore became a thriving financial center and services economy, and then reengineered itself yet again to become a cultural and recreational hub, building a world-class performing arts complex, museums, galleries, theme parks, and casinos.

While promoting market capitalism, exploiting Singapore’s strategic location at the mouth of the Straits of Malacca and drawing investment from the rest of the world, LKY placed notoriously tight control over social behavior and political opposition. He also invested heavily in defense and instituted a mandatory national service program, which remains in place to this day.

Is it possible for other states in the region or worldwide to follow the path taken by Lee’s Singapore?

LKY’s distinctive formula of economic liberalization combined with restrictions on political freedoms has been the envy of many governments around the region and the world.

Singapore, however, is sui generis on many levels, making it a difficult act for others to follow. For starters, it is tiny, both in terms of land mass and population. Only thirty miles across at its widest point and with a population of 5.6 million, the entire nation of Singapore is roughly half the geographic footprint of New York City and far less populous.

Second, Singapore enjoys relative ethnic homogeneity, with ethnic Chinese making up nearly three quarters of the population, and a combination of Malay, Indians, and others accounting for the rest. While not as homogenous as, say, Japan or Korea, Singapore fares well on this front compared to immediate neighbors Indonesia, Malaysia, and Myanmar, as well as to other more diverse countries in the developing world.

Third, successive Singaporean administrations have managed to deliver results without succumbing to the seemingly inevitable allure of corruption in other countries. Quite the opposite, technocratic competence and clean government have been hallmarks of every administration for the past five decades, thanks both to a rigorous meritocratic system and a calculated decision by the government to pay its officials on par with their peers in the private sector. Singaporean government officials are among the highest paid in the world, which, along with a culture of respect for government service, has enabled the ruling party to replenish itself with fresh talent at regular intervals.

Such factors are not easily replicable elsewhere.

While Lee is revered for his economic stewardship, he faced stern criticism on issues like the suppression of political dissent and press freedom. Do you see political reforms happening anytime soon?

Lee Kuan Yew’s brand of enlightened authoritarianism, in which the good of society took precedence over the rights of individuals, translated into considerable suppression of democratic freedoms.

“Lee Kuan Yew’s brand of enlightened authoritarianism, in which the good of society took precedence over the rights of individuals, translated into considerable suppression of democratic freedoms.”

In recent years, a new generation of voters less in touch with the struggles of the past and hyper connected to the world of the future has proven less enamored with this kind of paternalism. While respectful of LKY’s achievements, young people in Singapore are nonetheless pushing the boundaries of discourse and telling the current government, headed by LKY’s eldest son, Lee Hsien Loong, that they want change.

The 2011 elections reflected that evolution, with opposition politicians winning an unprecedented six out of eighty-four seats in parliament. Singapore’s next general election, which must be held before January 2017, will be the first significant test of the direction of the country in the post LKY era.

Despite its success, the city-state faces a number of pressing challenges, like widening economic disparities and a rise in immigration. What’s at stake here?

Singapore’s explosive economic growth has been accompanied by rapid population growth, with a large influx of foreigners drawn to Singapore for both high- and low-end jobs. Some two of every five people living in Singapore are now said to be foreigners, and this has put a strain on housing, infrastructure, job prospects, and national identity.

At the high end, foreign talent with expat packages have driven up land and housing prices; at the low end, laborers from China and the Indian sub-continent have driven down wages. This issue set has become a considerable challenge for the ruling People’s Action Party and is a hot topic of discourse on social media.

Singapore is also part of a region confronting tests over competition in the South China Sea as well as anticipating Washington’s “strategic rebalancing” to Asia. What role can Singapore play in these developments?

Singapore plays an important role in regional security and enjoys a close security relationship with the United States.  U.S. aircraft carriers regularly visit Singapore’s deep water port at Changi Naval Base, which Singapore built in the 1990s at its own expense to help ensure a continued, strong U.S. presence as a regional balancer in Southeast Asia. Singapore is also a close partner to Washington on a wide range of counterterrorism initiatives.

At the same time, Singapore maintains good relations with China and has used that relationship to help interpret Beijing’s behavior to Washington, particularly in time of stress. Successive U.S. Presidents since [Richard M.] Nixon have valued—and to varying degrees relied on—Singaporean leaders’ insight and advice on China. I expect that pattern to continue in the post-LKY era, although LKY was undoubtedly uniquely qualified to play that role.

Singapore: The Limits of a National Response

The recent rise in COVID-19 cases in Singapore shows that there are limits to what national responses to a global pandemic can achieve.

As the coronavirus outbreak worsens, the U.S. government should learn from initial responses in Hong Kong, Singapore, South Korea, and Taiwan.