Despite the commanding performance of Angela Merkel’s governing Christian Democratic Party at the polls, challenges remain in forming a coalition government with center-left Social Democrats, says CFR Senior Fellow Charles Kupchan. Merkel could even end up "a weakened chancellor" from the process, Kupchan says in a written Q&A. As for the European ramifications of the German election, Kupchan says Merkel’s victory "provides a measure of reassurance" for a continent still reeling from the four-year-old debt crisis, but adds that "Berlin’s policy toward the eurozone crisis is unlikely to change significantly" in the coming months. 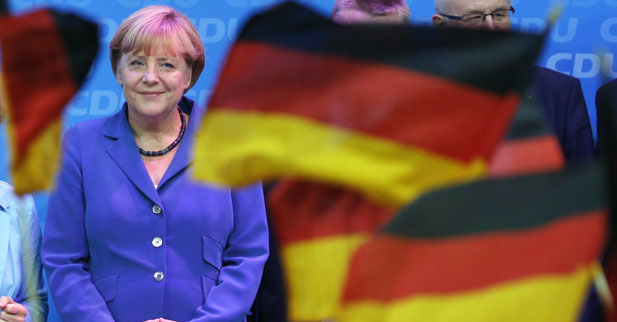 Does Merkel’s resounding victory vindicate her handling of the eurozone crisis?

More From Our Experts
Liana Fix
Germany’s China Policy: Has It Learned From Its Dependency on Russia?
Christopher M. Tuttle
What the Midterm Elections Mean for U.S. Foreign Policy

The result vindicates her handling of the eurozone crisis – at least as far as German voters are concerned. Merkel responded cautiously and slowly, seeking to sustain a consensus among Germany’s mainstream parties. Her focus on austerity, although not popular among those southern tier Eurozone members struggling with unemployment and low growth, won the approval of German taxpayers.

More generally, the results of the German election reversed the general European trend of mainstream left and right parties converging toward the political center, but losing ground to smaller parties more skeptical of European integration. The "grand coalition" between the Christian Democratic Union/Christian Social Union (CDU/CSU) and the Social Democratic Party (SPD) that looms on the horizon consolidates the pro-EU orientation of the next German government. Alternatives for Germany, the new German party resolutely opposed to bailouts for the Eurozone’s weaker economies, failed to attain the five percent of votes need to enter the parliament. The populist, anti-immigrant, anti-EU sentiment faring well in other EU member states has yet to gain significant traction in Germany. That is good news for Germany and for the European Union.

At the same time, there is considerable fluidity beneath the surface of Merkel’s convincing victory. With her preferred coalition partner (the Free Democrats) having failed to win seats, it could take weeks, if not months, for a new coalition to form. A grand coalition, if and when one comes together, could be unwieldy; the Social Democrats did not fare well when they were previously in a coalition with Merkel (2006-2009), and will bargain hard over domestic issues, such as taxes, minimum wage, and pension reform. Paradoxically, even though Merkel won a convincing victory, she may end up a weakened chancellor.

Last month, German finance minister Wolfgang Schäuble conceded what everyone suspected: Greece will need a third bailout. Do you expect more of the same focus on strict austerity or could a coalition involving the SPD result in an easing up of austerity measures in the peripheral eurozone countries?

Whatever the makeup of the next government, Berlin’s policy toward the eurozone crisis is unlikely to change significantly. Merkel’s preference for austerity rather than stimulus enjoys widespread political support, and German taxpayers are reluctant to take on further exposure to troubles in the southern tier.

More From Our Experts
Liana Fix
Germany’s China Policy: Has It Learned From Its Dependency on Russia?
Christopher M. Tuttle
What the Midterm Elections Mean for U.S. Foreign Policy

Nonetheless, Greece is likely to receive another bailout and probably a write-down of its debt. The relatively small size of the Greek economy makes further relief politically palatable in Germany.

The bigger risk is the reemergence of financial instability in a much larger eurozone economy, such as Italy, Spain, or France. Germany is likely to continue to move slowly on banking and fiscal union and to resist the collectivization of debt. For the foreseeable future, a debt-sharing plan, such as eurobonds, is off the table. Should a more serious crisis emerge within the eurozone, the limits of Berlin’s readiness to act would be sorely tested.

How did other European countries react to this result?

At a time when tough economic conditions have brought down one European government after another, Merkel’s victory was seen in most parts of Europe as an impressive accomplishment. At a time of political uncertainty across the EU, many Europeans look to Berlin to provide steady leadership. The outcome thus provides a measure of reassurance.

Those southern tier countries suffering from austerity and high unemployment were the least enthusiastic about the outcome. Voters in these countries would prefer a German government less insistent on "fiscal consolidation" and more supportive of stimulus and job creation.

Many commentators have lamented the parochial nature of the political debate in Germany despite its standing as Europe’s leading power. Do you think this electoral victory will inspire a more outward-looking foreign policy from the chancellor?

No. Merkel’s main priorities are domestic and, beyond Germany’s borders, guiding the EU through its financial crisis. She will remain focused on these issues – to the exclusion of most others. On Syria, Iran, and other geopolitical challenges, Germany will continue to take a back seat.

Finally, how will this affect the transatlantic relationship? Will the United States finally start seeing Germany punching its weight on economic and security issues?

Washington’s hopes of a more outward-looking Germany are likely to go unfulfilled. However, Merkel’s victory does offer the prospect of stability and continuity in the EU. The big question for Berlin and Washington is whether the Eurozone’s financial crisis is over for good. The answer to that question will likely determine Merkel’s legacy.