Argentina has drawn international attention for the January 18 death of Alberto Nisman, a prosecutor who was investigating the 1994 bombing of a Jewish center in Buenos Aires that killed eighty-five people. Nisman had alleged that President Cristina Fernandez de Kirchner conspired with Iran to cover up its role in the attack as part of a deal linked to a 2013 memorandum of understanding (Nisman claimed that the memorandum, which would have established a truth commission to investigate the attack, secretly involved a trade deal in which Kirchner would request that Interpol withdraw warrants against Iranian suspects in the bombing in exchange for Iranian oil.). On February 13, Nisman’s successor, Gerardo Pollicita, asked a judge to charge Kirchner and her foreign minister in the investigation.

Nisman’s death and the investigation around it have exposed deep flaws in Argentina’s justice and intelligence systems, says Sergio Berensztein, an Argentine political analyst. The case may also shed light on murky, shifting relations with Iran that may tarnish Kirchner’s already troubled legacy as she prepares to leave office at year’s end, he says. "We don’t know how public opinion is going to react," Berensztein says. "The environment is unstable." 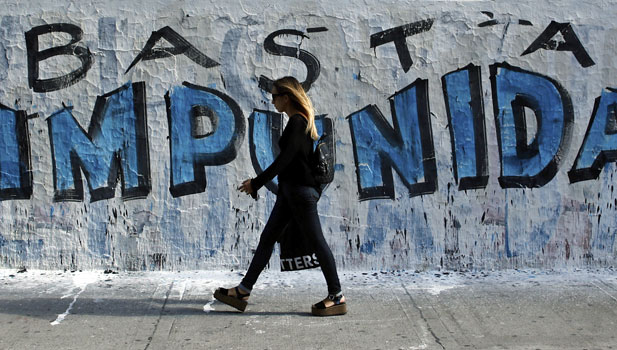 A few days before he died, Alberto Nisman released a report alleging that President Kirchner and her foreign minister had agreed to cover up Iran’s role in the 1994 bombing of the Argentine Israelite Mutual Association (AMIA) in Buenos Aires. How have Argentines received the report?

Most Argentines—polls indicate more than 70 percent—believe that the allegations are credible. Truth be told, Nisman’s death has attracted more attention than [his investigation], but most independent media believe his allegations were credible and it’s up to the judge, [federal judge Daniel Rafecas, who has taken on the AMIA investigation], to investigate them. When Nisman went before the judge to make his allegations he included four thousand hours of tapes, including [recordings of] many top officials—the rumor is that the president had been taped—talking about the memorandum. On top of this you have recent events [Nisman’s death], which lends credibility to Nisman’s allegations.

There are competing theories about how Nisman died. Some believe it suicide, while others, including the president, allege something more sinister. How likely are we to find a firm answer?

I’m not very optimistic. Usually these high-profile cases are not investigated in a very professional fashion—rather, the contrary. A few weeks after Nisman’s death, what we have is a really substandard investigation process. The team in charge, led by prosecutor Viviana Fein, may not have the right resources and skills to provide clear and credible answers to Nisman’s death. The federal police is a disaster, with corruption all over the place. They have standard operating procedures, but Fein’s team didn’t follow them, and the scene was probably contaminated. Some of the evidence may already be gone. Many, many people entered the apartment [when it was a crime scene]. It was extremely irregular that the deputy minister of security, [Sergio Berni], was at Nisman’s place for hours before Fein arrived and before the police were there. There are allegations that he took bags of things out of Nisman’s home, but we’ll never know if it’s true or not. It’s incredible that he was there while Nisman’s body was lying in the bathroom.

Nisman’s former wife, Sandra Arroyo, herself a federal judge, is trying to get some answers and she’s since been very influential, but we don’t know if that will change how the investigation is being conducted. The lack of credibility and the skepticism that pervades here stems from these events related to Nisman’s death.

What is known about Argentina’s ties with Iran?

At the time of the 1994 bombing, the relationship was not at all important—diplomatically, politically, and in terms of trade. At the time President [Carlos] Menem had a very strong alliance with the United States because of Desert Storm. [Editor’s note: Argentina participated in the U.S.-led coalition, sending equipment, including warships.] Argentina underwent very substantial promarket reforms aligning it with the United States, and that triggered some misunderstandings with some Middle Eastern countries.

Around 2011 the relationship with Iran changed, thanks to the involvement of Venezuela. President Hugo Chavez was instrumental in getting Argentina close to Iran. A journalist, Pepe Eliaschev, published a couple of articles indicating that Argentina was signing this [2013 memorandum of understanding] with Iran thanks to the involvement of Syria, and that entailed increasing exchange in all areas—political, diplomatic, economic, tied to possible defense projects.

The memorandum never had any impact on the investigation because Iran never ratified it. Theoretically, the Argentine judge in charge of the investigation was going to be able to interrogate Iranian suspects in the 1994 attack after an independent council reviewed materials in the investigation. But there was so much material in the case that the assumption was that the interrogations would never take place, which is why people were so concerned about the memorandum: The government was so eager to get this done, with no time to have a serious discussion. They were rushed and we never understood why.

It’s not that Iranians were extremely popular here, but we were surprised that all these Kirchnerista leaders were so openly involved in getting the memorandum signed. Iran has increased its presence in Latin America, but in Argentina, in part because of the size and influence of the Jewish community, the Iranians are not as influential.

Some people say this case has revealed serious flaws in Argentina’s justice and intelligence systems. Shortly after Nisman’s death, Kircher sent a bill to Congress to dissolve Argentina’s intelligence apparatus. Can you discuss those concerns?

Beginning in the late 1980s and early 1990s, corruption was so bad among federal police that judges—particularly federal judges—began working with [the intelligence agency] SIDE because they couldn’t work with police. Over the years, judges got used to using that mechanism, probably without proper controls, while also empowering ‎intelligence officials who may have used their influence and information for other, even illegal, purposes.

It’s true that the relationships between the justice system and the intelligence community are not as balanced or as accountable as they should have been. It’s also true that all administrations—including the Kirchners—used this opaque relationship for different purposes, including attacking opposition leaders.

"Corruption is entrenched in Argentine poltics, and the Kirchners are an illustration of that."

The Kirchners used SIDE to their advantage for their entire twelve years in power. [Editor’s note: President Kirchner’s late husband, Nestor Kirchner, was in office from 2003 to 2007.]

When the Kirchners were alleging that Iran had been instrumental in bombing AMIA, between 2005 and 2011, they used SIDE [intelligence]. [Former spy chief] Antonio Stiusso, who is now the focus of the government’s investigation into the death of Alberto Nisman, was a go-to guy to get Nisman all the information on the case.

However, that equilibrium changed because spies involved in the original AMIA investigation were angry that Kirchner had signed the memorandum [with Iran] and decided to feed information involving corruption about her administration to judges. Judges began naming the president in these investigations, and she felt it was a conspiracy against her.

Meanwhile, Kirchner decided to take over the judicial system in 2013: She basically wanted to appoint friendly judges to investigate cases against her administration, including a money-laundering investigation involving a hotel company owned by the Kirchners; one involving her former vice president, Amado Boudou, for alleged bribery; and another involving the chief general of Argentina’s army, Cesar Milani, who was charged with crimes against humanity.

All governments—particularly the Kirchners’—have used intelligence to amass their own power and for their private businesses. Corruption is entrenched in Argentine poltics, and the Kirchners are an illustration of that.

Presidential elections are slated for October. Opposition candidate Mauricio Macri, mayor of Buenos Aires, is expected to run against either Buenos Aires Governor Daniel Scioli or Sergio Massa, Kirchner’s former chief of staff, both from Kirchner’s Peronist party. How might the Nisman case affect elections?

It’s too soon to say. We don’t know if the Nisman case is the beginning of a trend and whether we’ll see more bad news. A link has been broken between the executive branch and the intelligence community. We don’t know the outcomes of the February 18 demonstrations [demanding answers on Nisman’s death]. The president will deliver the state of the union on March 1, and we’ll see a bunch of cases in the justice system that she’s very worried about.

We don’t know how public opinion is going to react. The environment is unstable and it’s too early to know how voters are going to react during these uncertain times.

President Kirchner will leave office at the end of the year, ending twelve years of Kirchner rule. How will the Nisman case affect her ability to govern for the remainder of her term?

The country has been in a recession for five quarters, there’s no job creation, inflation is between 35 and 40 percent. We don’t actually know the real inflation rate because the administration blatantly lies about it. We have price-control mechanisms. It’s not as disastrous as Venezuela, but the state is very interventionist, and we have a fiscal deficit of 5 percent [of GDP]. In the meantime, we are importing natural gas and oil into a country with massive energy resources.

And when she leaves office?

If you look back in Argentine history, one of the worst possible jobs is to be a former president. No one likes you. I don’t think Kirchner will be an exception. Rather, she’s going to suffer quite a bit after finishing her term. She may have some support in Congress for a while. But because there’s a lag in the justice system, some of the investigations against her are going to take a while. The fact that she’s been trying to get immunity through MERCOSUR [Common Market of the South] indicates she’s very worried about the potential implications of these investigations.