A vigorous debate is underway in Washington regarding what role Congress, and the United Nations Security Council, should play in reviewing and approving any deal between Iran and the so-called P5+1 major powers (the United States, Russia, China, France, the UK, and Germany). President Barack Obama’s administration says any Iran deal, which would likely involve easing extensive U.S. and international sanctions on Iran, would not be legally binding on the United States, and hence Congress should not have a role in approving it. But given the importance of the deal, says CFR’s John B. Bellinger III, “Republicans (and Democrats) in Congress are not out of line to insist on having some role in reviewing the agreement.”  At the same time, he adds, “congressional Republicans should actually want the administration to immediately seek a binding Security Council resolution that would require international verification of Iran’s commitments under the agreement and impose additional international penalties for noncompliance.” 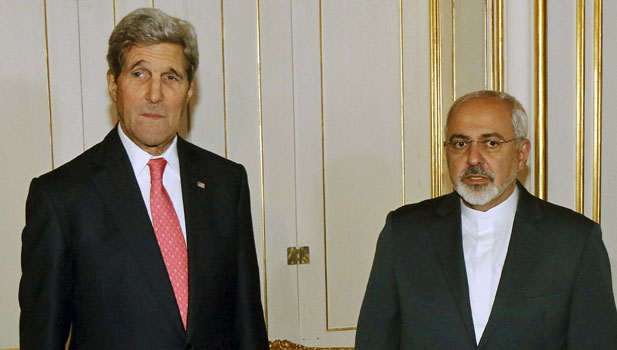 How does sanctions relief typically work in the United States?

Congress has imposed a complex and overlapping array of sanctions on Iran, including through new sanctions enacted during the last five years, that target Iran’s oil and gas, petrochemical, shipping, and financial sectors. In addition, President Obama has imposed additional sanctions on Iran through a series of executive orders issued pursuant to the International Emergency Economic Powers Act.

Is there any precedent for such a deal in which the president would rely on the Congress to play such a crucial role in lifting sanctions?

It’s not clear that President Obama is relying on Congress to lift sanctions at all. There is a bipartisan concern in Congress about the Iran deal, and many (if not most) Republicans appear to be opposed to lifting congressionally imposed sanctions. Thus, executive branch negotiators can promise only to lift or waive sanctions that the president has sole authority to control. At the same time, the administration must be cautious not to agree to any deal that would be so unpopular in Congress that a supermajority of Congress could pass additional sanctions on Iran over a presidential veto.

How is the U.S. policy process different (or more complicated) when the sanctions have an international dimension, like in the case of Iran, as opposed to when sanctions are unilateral, as in the case of Cuba?

The Iran talks are a multilateral negotiation, and U.S. negotiators must coordinate commitments they make to suspend or lift U.S. sanctions on Iran with the commitments made by the other so-called P5+1 countries. The UN Security Council has imposed sanctions on Iran in a series of six resolutions over the last nine years and the P5 countries, who are the five permanent members of the Council, have likely offered to support modification or lifting of these sanctions.

Germany, France, and the UK have likely promised to support modification of sanctions imposed by the European Union. U.S. negotiators have presumably committed to modify those sanctions that are within the power of the president to waive or suspend. U.S. negotiators must be careful not to commit—to Iran or the other P5+1 members—to take actions regarding sanctions relief that the executive branch will not be able to deliver, for either legal or political reasons.

Is the Congress trying to assert more of a role in this foreign policy process than it has in the past?

Congress has always been concerned about foreign policy commitments made by presidents. For instance, a bitterly divided, Republican-controlled Senate refused to approve the Treaty of Versailles that had been laboriously negotiated by Woodrow Wilson.

That said, the current controversy between Congress and the Obama Administration is unusual in several respects. First, it is certainly unusual for a large bloc of Congress (47 Republican Senators) to write directly to the leadership of another country (especially an adversary) in the midst of a sensitive negotiation being conducted by the president. Second, contrary to the apparent premise of the Republican letter, the Iran agreement would not be a treaty and does not require Senate approval. Moreover, according to the Obama Administration, it would not even be legally binding as a matter of international law (and therefore would not even have to be officially submitted to the Congress under the Case-Zablocki Act, which requires submission to Congress of legally binding international agreements that do not constitute treaties). In this respect, the Obama administration is correct that Congress traditionally has not had a role in reviewing and approving mere political declarations made by the executive branch (which are not legally binding under international law).

Nonetheless, the Iran deal is not a garden-variety political declaration. Even if it is not technically legally binding under international law (as a treaty or executive agreement), it obviously is an enormously important political undertaking by the executive branch and would be politically difficult for the current or a future president to reneg on; Republicans (and Democrats) in Congress are not out of line to insist in having some role in reviewing the agreement, even if formal Congressional “approval” is not required.

Some policymakers fear the Obama administration will circumvent the Congress and enshrine sanctions relief in a UN Security Council resolution. How would this affect the ability of future U.S. administrations to sanction Iran?

Senator Bob Corker (R-TN), the Chairman of the Foreign Relations Committee, has written  to President Obama to ask whether the administration is considering “going to the United Nations Security Council without coming to Congress first.”  He added that this would be a “direct affront to the American people.”

In response, White House Chief of Staff Denis McDonough confirmed in a letter to Senator Corker that the administration does plan to seek a Security Council resolution to affirm and/or implement any Iran agreement. He explained that: “We anticipate that the Security Council would pass a resolution to register its support for any deal and increase its international legitimacy. A resolution would also increase the international pressure on Iran to live up to the deal and would expand the risks if they failed to do so.”

"The administration must be cautious not to agree to any deal that would be so unpopular in Congress that a supermajority of Congress could pass additional sanctions on Iran over a presidential veto."

Despite their suspicions about both the Obama administration and the United Nations, congressional Republicans should actually want the administration to immediately seek a binding Security Council resolution that would require international verification of Iran’s commitments under the agreement and impose additional international penalties on Iran for noncompliance. The Security Council can impose internationally binding requirements on Iran that Congress by itself cannot.

Congressional Republicans presumably are concerned that the Obama Administration would instead try to circumvent the Congress by agreeing to a binding Security Council resolution that would place obligations on the United States, not on Iran (e.g., by requiring the United States to lift its domestic sanctions). However, it would be inconceivable to me that the Obama administration would seek a Security Council resolution that would impose binding legal obligations on the United States that would actually supersede or be contrary to U.S. statutory sanctions on Iran; this would also be contrary to Denis McDonough’s letter to Senator Corker.

In the event a deal is not reached, what action could the Congress take in regard to toughening sanctions against Iran?

Congress could pass additional sanctions on Iran and has threatened to do so. Several different bills have already been introduced to impose new sanctions on Iran (and one bill was passed by the House in 2013), and other members of Congress have indicated their desire to introduce additional bills. Of course, President Obama would have to sign any legislation passed by Congress for the legislation to become law, unless there are enough votes to override a presidential veto.

Senator Corker plans to hold hearings in mid-April on a bill that would require the president to submit the Iran deal to Congress for review and would prohibit the president from exercising his waiver authority to lift statutory sanctions for a period of two months while the congressional review is ongoing. The White House has said that President Obama would veto the Corker legislation. Senator Corker is seeking additional Democratic votes so that Congress could override a presidential veto.