Skip to main content
New Order or Disorder for Libya?

As UN-backed efforts to establish a Libyan unity government falter, signals that the United States and European allies intend to expand their military campaign against the Islamic State could cause even more upheaval, says Mary Fitzgerald, a researcher who follows the country closely. Fitzgerald says while the threat posed by the Islamic State is growing, an intensified military intervention could stir deeper rifts among rival camps. "Various factions have so far been more interested in prevailing over their opponents than taking on Islamic State," she says. "Inserting Western special forces into such complicated local environments risks inflaming existing rivalries." 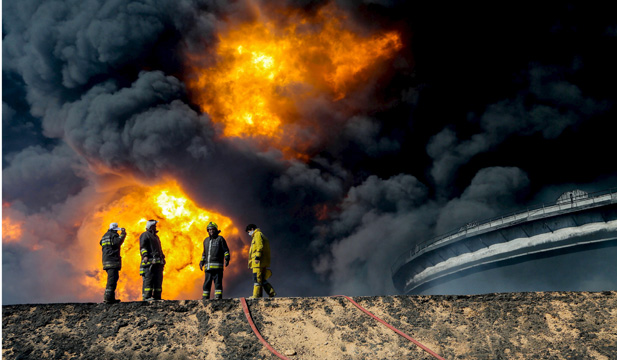 To understand the current divisions in Libya, we have to go back to two events in 2014. One was an operation launched in Benghazi that May by Khalifa Haftar, a former [Muammar al-]Qaddafi-era general who had attempted a coup a few months earlier. The operation was aimed at Islamists of all stripes—extremists accused of assassinations, but also others, like the Muslim Brotherhood, who had participated in Libya’s democratic transition—and it triggered fighting that continues today.

The other was a militia battle for control of Tripoli following Libya’s second post-Qaddafi parliamentary elections. It ended with an alliance known as the Libya Dawn, which included Islamist factions, becoming the dominant power in the capital and out of that emerged a self-declared government backed by the rump of the previous parliament, the General National Congress. The internationally recognized government of Prime Minister Abdullah al-Thinni fled to eastern Libya.

Since then Libya has been divided by two rival governments and two rival parliaments, one internationally recognized and elected, [the House of Representatives (HoR), in Tobruk], and the other self-declared. Each is bolstered by myriad armed factions that continue to fight in different parts of the country. Controversially, the HoR appointed Haftar as commander-in-chief last year.

Why did the Tobruk-based parliament take issue with the UN-brokered agreement this week?

In December individuals from the two rival parliaments signed a political agreement from which, the UN hoped, a unity government would emerge, bringing an end to the problem of rival institutions and helping unite armed factions to take on the growing threat posed by Islamic State.

The agreement signed in December is fragile; it does not have the endorsement of key actors and constituencies inside Libya. Tellingly, the presidency council, which is the first layer of what is hoped to be the unity government, up to now has been meeting in Tunis. It has not been able to sit in Tripoli, because a number of militias there oppose the agreement.

"There is a sense that a new order is taking shape, and militia leaders, tribal elders, politicians, and business figures are jostling to protect their interests."

This week we’ve seen a number of setbacks for the UN-brokered deal. The House of Representatives, in Tobruk, voted to accept the agreement signed in December in principle—hardly a ringing endorsement—but insisted that an article related to the army leadership be changed.  A number of factions want Haftar to remain in that role and will accept nothing else. But on the other side are factions adamant that Haftar be removed; they believe that Haftar’s ultimate aim is a power grab. The Haftar conundrum could likely be the rock that the agreement perishes on.

The House of Representatives also voted to reject the cabinet that had been proposed by the presidency council. The planned cabinet comprised thirty-two ministers—an extraordinary number for a nation of just six million people. It shows how many factional interests need to be balanced. There is a sense that a new order is taking shape, and militia leaders, tribal elders, politicians, and business figures are jostling to protect their interests. If certain elements feel they stand to lose out, they will do whatever they can to blow that emergent order off course.

How significant is the Islamic State’s presence in Libya? Why has it taken such deep root in Libya?

Hundreds of Libyans went to Syria in recent years and many of them joined Islamic State there, so concerns always existed about what would happen when they started returning home. The group also includes a large cohort of foreigners, including at the leadership level. The first Islamic State affiliate declared itself in Libya in late 2014 in the eastern town of Derna. Last year Islamic State was routed from Derna by a mix of local Islamist militias and residents.

Islamic State’s stronghold in Libya right now is the coastal town of Sirt, which is Qaddafi’s hometown. After taking over a number of institutions there last year, Islamic State has consolidated control of the town. They snuffed out an attempted uprising, and they have carried out public executions in an attempt to frighten the population into acquiescing. They also abducted twenty-one Egyptian Copts near Sirt last year, later using their mass beheading as part of their propaganda.

Islamic State has carried out a number of attacks in Tripoli over the last year, including one on a luxury hotel during which more than a dozen people were killed. Another attack was on the only operating airport in Tripoli in September.

"The various factions have so far been more interested in prevailing over their opponents than taking on Islamic State."

This month we’ve seen an unprecedented wave of attacks by IS. It is no coincidence that this is happening at the same time that the UN-brokered unity government is tentatively taking shape. Since the beginning of January Islamic State has carried out a series of raids on oil infrastructure in Libya’s oil crescent, setting tanks ablaze in what the National Oil Corporation has described as an environmental catastrophe. While they were pushed back by local militias, the attacks show IS’s determination to disrupt Libya’s energy sector, if not seize control of oil facilities; it would be difficult for IS to replicate what they have done in Syria and Iraq in terms of tapping into oil revenues due to the nature of Libya’s hydrocarbons sector.

Also this month Islamic State carried out a suicide truck bombing which killed over sixty people at a police training center in the western town of Zliten, by far the deadliest attack Libya has witnessed since 2011. While it caused deep shock, it still has not focused minds as much as the UN would like in terms of making Libya’s squabbling political factions realize that the threat posed by Islamic State is growing and the sooner they unite to face this threat together the better.

Over the last year and a half the political power struggle and resulting security vacuum has created an ideal space for Islamic State to expand its presence. The various factions have so far been more interested in prevailing over their opponents than taking on Islamic State, and I’m not sure their calculus has shifted much despite the increasing number of attacks.

This push for unity, then, is mostly coming from international actors rather than Libyan parties?

What’s been striking is the utter cynicism with which different elements in Libya’s power struggle have exploited the Islamic State, or the threat posed by it. Some allied with the administration in Tripoli, while they abhor the attacks Islamic State has carried out in western Libya, are supportive of IS fighters in Benghazi because they are battling Haftar’s forces there. Similarly, certain elements connected with Haftar or the recognized parliament, in eastern Libya, have at times wildly exaggerated the scale and presence of Islamic State, trying to smear all their political opponents as being in cahoots with them. In the middle of all of that, Islamic State has grown.

There are now indications that the United States, along with the UK, France, and Italy, are considering expanding the war against the Islamic State to Libya. What sort of intervention are they contemplating?

The United States is planning for a possible intervention. It carried out air strikes in eastern Libya late last year, killing Abu Nabil, a senior Islamic State figure. A future intervention is likely to involve an expanded aerial campaign, accompanied by some kind of ground presence.

Some Western officials say the ground presence would be limited to a small supervisory mission and/or special forces and intelligence liaising with Libyan armed groups. That is already happening to a degree. special forces from the U.S. and a number of European countries have been on the ground in recent months liaising with different armed groups to assess capabilities and get a sense how these factions might knit together in an anti–Islamic State push.

While an aerial campaign aimed at known Islamic State targets is one thing, having foreign forces on the ground, no matter how limited, is fraught with all kinds of risks. Given the patchwork of militias across the country and the shifting alliances between them, inserting Western special forces into such complicated local environments risks inflaming existing rivalries.

A number of figures in Libya are warning against any ground forces. One of the deputy prime ministers of the UN-brokered unity government, Ahmed Maiteeq, recently said that boots on the ground would not be welcomed, no matter how limited in number.

The Economist Intelligence Unit says Libya will have the world’s fastest-shrinking economy in 2016. What do economic conditions mean for its stability?

Libyan central bank officials have repeatedly warned that the country is facing economic collapse. Libya has one of the largest state payrolls in the world, which is a leftover from the Qaddafi era, as are the massive fuel and food subsidies. Due to an ill-fated decision taken after Qaddafi’s fall in late 2011, armed groups on both sides of the current political power struggle are receiving state salaries from the central bank headquartered in Tripoli.

The instability has resulted in oil production hovering between three hundred thousand and four hundred thousand barrels per day, a fraction of the 1.6 million barrels per day Libya had been producing before Qaddafi’s ouster. Global oil prices are plummeting. All of this has caused the central bank to eat into its foreign reserves to cover the budget, and foreign diplomats have warned that Libya could go broke before it is at peace. There is still too much denial about the extent of the economic crisis, but that gathering storm will have serious repercussions.