After a successful visit to Israel, President Obama has apparently turned the Israeli-Palestinian portfolio over to Secretary of State John Kerry, says Martin Indyk, a leading Middle East expert. Past secretaries of state Henry Kissinger, Cyrus Vance, James Baker, and Warren Christopher, distinguished for their work on Middle East issues, always had their president’s complete support, Indyk says. "It remains to be seen if Obama is so committed," Indyk says. "Is the president committed to this, or is he pivoting to Asia? If he’s committed to it then the Secretary of State’s involvement will be potentially very important, but if he’s just leaving it for Kerry to fail, or [waiting to see] if Kerry [can] succeed, then I don’t think it’s going to work."

It’s been a couple of weeks since President Obama made his first trip to Israel as president, in which he gave a very well-received speech to an audience of students and touched upon the need for peace between Palestinians and the Israelis. Now Secretary of State John Kerry is apparently going to have to carry the peace-talks ball. Where do you think the United States stands after this trip? 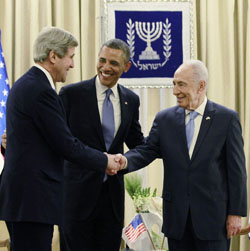 In preparation for the trip, the White House wanted to remove any expectations that there would be any significant results, and the timing of the trip seemed to be structured in a way that would have the effect of lowering expectations because the president would be going only three days after the new government in Israel had been formed. But, in fact, the president was able to deliver what I consider to be two big things: the first was that he did win over that part of the Israeli public that is winnable. His popularity jumped in the first few days after his speech. He’d started from a low base of ten; now he’s around forty, and that’s very significant. And the fact that he took Israel by storm and won the hearts and minds of many Israelis had a direct impact on the second deliverable, which was the apology that Prime Minister Benjamin Netanyahu made to Turkish Prime Minister Recep Tayyip Erdoğan leading to the opening of renormalizing relations between Turkey and Israel.

The two are directly related. The fact that the president had turned himself almost overnight from being an unpopular figure in the minds of most Israelis into somebody who they now understood did care about them meant that he managed to convince them to trust him more. The importance of that was that Netanyahu knew that the Israeli public would punish an Israeli prime minister who mishandles the relationship between Israel and a popular American president. Netanyahu had been able to exploit the fact that President Obama was very unpopular in Israel. When he famously upbraided the president in the Oval Office, Netanyahu actually went up ten points in Israeli public opinion. Obama in effect reversed that when he asked Netanyahu during the trip to call Erdogan and apologize to him. Instead of saying he couldn’t do that, which is basically the position that Netanyahu had adopted for three years, he turned around and said okay, essentially understanding that the Israeli public would support him in doing so and would criticize him for not responding to a president who had gone out of his way to manifest his friendship to Israel.

And what does that leave us in coming days?

The president’s speech was brilliant and very effective, but everything in the end depends on the follow-through--and that job has been left to Secretary of State Kerry. The secretary of state believes passionately in the need to try to resolve the Israeli-Palestinian conflict, and he also believes that this needs to be done at his level, not at the level of envoys. So he’s demonstrated with a third trip coming up to Israel and Ramallah that he intends to spend a lot of time on this issue.

So he wants to be another Henry Kissinger, who personally negotiated accords between Israel and both Egypt and Syria in the 1970s, and not a Senator George Mitchell, the special envoy of President Obama, who failed to achieve anything?

"Those secretaries of state that were engaged—whether it was Kissinger, Christopher, Vance or Baker--were backed by presidents who wanted agreements and were willing to engage with the Middle East leaders when asked."

The allusion to Henry Kissinger is appropriate. He introduced the concept of shuttle diplomacy to resolve Israeli conflicts, and I do think that John Kerry is going back to that mode of operation. He’s not the only one since Henry Kissinger. President Bill Clinton’s first secretary of state, Warren Christopher, made twenty-six trips to Damascus trying to achieve an Israeli-Syrian peace agreement. It was only in the days of President George W. Bush, when peacemaking in the Middle East was a very low priority compared to war-making in Iraq, that you saw a shift in the way peacemaking was handled. So Kerry’s return to the old way of doing business is very important. When the other secretaries of state were engaged in this kind of intensive negotiation with the parties, it was absolutely essential to their success that their interlocutors in the Arab and Israeli side understood that the president was behind them 100 percent. Those secretaries of state that were engaged--whether it was Kissinger, Christopher, Vance, or Baker--were backed by presidents who wanted agreements and were willing to engage with the Middle East leaders when asked. And it remains to be seen if Obama is so committed. Is the president committed to this, or is he pivoting to Asia? If he’s committed to it, then the secretary of state’s involvement will be potentially very important, but if he’s just leaving it for Kerry to fail, or [waiting to see] if Kerry [can] succeed, then I don’t think it’s going to work.

What about the Palestinians? What is their view right now? Are they encouraged? From the face of it, they were quite discouraged by the president’s visit. The stark contrast with the amount of time and exclusiveness with which he dealt with Israelis--whether it was the young people in the hall where he was doing a speech or the leadership, President Shimon Peres and Prime Minister Netanyahu--Obama was essentially conveying a message of love. The contrast with his reserve toward the Palestinians was quite noticeable to the Palestinians. I don’t think in general that they really appreciated his visit. Obama did tell the Israelis that occupation is unacceptable. And he did tell Israelis that you need to put yourselves in the shoes of the Palestinians and imagine what it’s like to be a Palestinian child dealing with a military occupation. That was a very strong pro-Palestinian statement. What that amounts to, either on the Israeli or Palestinian side, in terms of a willingness to engage in negotiations in a meaningful way, we won’t know until we see what Secretary Kerry can produce. You have a civil war raging in Syria and deep unrest in Egypt. How would you describe the Middle Eastern Arab World right now?It’s a region in turmoil, and it’s going to go on for some time. Syria is in a process of descending into chaos, and there doesn’t seem to be a will or a way to stop that. And that will, in short order, have an impact on our allies who are Syria’s neighbors: Turkey, Jordan, Israel, and Lebanon. We’re already seeing it: large refugee flows, likely to rise to a million in Turkey, a million in Jordan, and probably half a million in Lebanon within the next couple of months. That’s really going to create strains there. And then there’s the violence that has been occurring almost on a daily basis now in the Golan Heights and in Lebanon. It’s quieted down on the Turkish border, but it could easily flare up again. And so that’s the trend line, combined with another very disturbing trend line, which is the way in which al-Qaeda under the pseudonym of Jabhat al-Nusra is entrenching itself in the liberated parts of Syria, not just as a fighting force but as a governing force, and the fact that the opposition that we are working with is deeply divided and disorganized. On top of all of that is the horrifying death toll, which is by now probably more than eighty thousand people.

That’s just Syria. In Egypt we’ve got a democratically elected Muslim Brotherhood president, Morsi, who seems determined to impose majoritarian rule in which the rights of minorities--Christians, women, the opposition, and the free press—are being systematically denied. That’s a very disturbing development, compounded by the inability of this democratically elected president to deal with Egypt’s now dire economic situation by reaching an agreement with the IMF and getting the support from the international community that’s waiting for that agreement. And instead we have a paralysis in terms of economic management and a polarizing approach to governance. The police are on strike, the military doesn’t want to get involved, and the situation is deteriorating on all fronts quite rapidly.

If you’re in Washington and you’re looking at this whole picture, does this weaken your resolve to deal with the Israeli-Palestinian issue or does it make it more important? I’m trying to get some sense of priorities.

"In some ways, you’ve got a kind of specialization going on with the White House focused on Asia and the State department focused on the Middle East."

What you’ve got is a combination of a White House that is determined to end America’s involvement in wars in the greater Middle East and focus on Asia, and a secretary of state who thinks you have got to do both, who’s much more focused on trying to deal with Syria, with Egypt, and with the Palestinian issue as part of an intensive effort to protect and promote American interests in the Middle East. So in some ways, you’ve got a kind of specialization going on with the White House focused on Asia and the State department focused on the Middle East.

To the Brink With China

A Sino-American cold war, or even an actual one, is not inevitable, but either is more likely now than just months ago.

President Trump’s penchant for going it alone makes little sense in a world increasingly defined by global challenges that can best be met through collective action.