Appearing at Berlin’s Brandenburg Gate fifty years after John F. Kennedy’s famous speech, President Obama delivered a wide-ranging address that called for a reduction in U.S. and Russian nuclear stockpiles, renewed pledges for bolder action on climate change, and the closure of Guantanamo. In a written Q & A, CFR Senior Fellow Charles Kupchan says Obama delivered an inspirational speech to a public that is still receptive to his message despite disappointments over U.S. counterterrorism policies. The president’s appearance in Germany also reaffirmed that "Berlin now stands out as Washington’s go-to capital in Europe," Kupchan says. 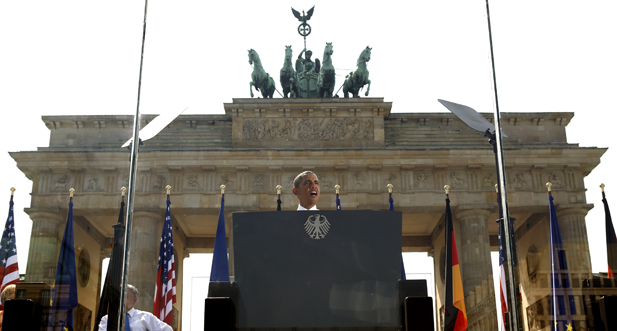 This speech, on a basic level, was clearly meant to affirm transatlantic ties. How effective was it?

More From Our Experts
Thomas Graham
NATO Countries Signal Resolve at Summit: What Does It Mean for Russia?
Stephen Sestanovich
Ukraine Should Wait on Cease-Fire Talks With Russia. Here’s Why.
Robert D. Blackwill
CFR’s Blackwill on U.S.-China Relations, Ukraine, U.S. Pivot to Asia

The Obama administration has been reinvesting in transatlantic ties–-one of the reasons for Obama’s trip to Berlin and for Washington’s keen interest in negotiating a free-trade pact with the EU. Obama did an effective job of reaffirming the historic importance of cooperation between the Atlantic democracies. But he also went out of his way to make clear that the Atlantic community must now look well beyond its own borders. "Our work is not yet done," Obama insisted, "For we are not only citizens of America or Germany--we are also citizens of the world." [Obama added], "Our values call upon us to care about the lives of people we will never meet."

One headline was Obama’s call for a one-third reduction in the nuclear arsenals of the United States and Russia. Based on recent meetings between the two sides, how feasible is that?

"Moscow has an interest in further reducing its nuclear arsenal, if only to reduce costs."

Relations between Washington and Moscow have been strained of late. Differences over Syria have proven a particular irritant. This backdrop may make progress on nuclear arms control more difficult. Nonetheless, Moscow has an interest in further reducing its nuclear arsenal, if only to reduce costs. There is a reasonable prospect for a deal between Washington and Moscow. In light of the difficulties involved in Senate ratification, that deal may well take the form of voluntary reciprocity and verification rather than a formal treaty.

How would you compare President Obama’s reception in the German capital compared to the exuberant one he received five years ago? Did the NSA domestic surveillance program and other White House counterterrorism policies affect his public perception?

Obama was warmly received in Berlin. He remains a very popular leader across Europe. He may not enjoy the "rock star" status he did when he visited Berlin as a candidate in 2008. Europeans are disappointed with his policies on climate change, drones, Guantanamo, and NSA surveillance, among other issues. Nonetheless, he remains an inspirational leader for many Europeans.

More From Our Experts
Thomas Graham
NATO Countries Signal Resolve at Summit: What Does It Mean for Russia?
Stephen Sestanovich
Ukraine Should Wait on Cease-Fire Talks With Russia. Here’s Why.
Robert D. Blackwill
CFR’s Blackwill on U.S.-China Relations, Ukraine, U.S. Pivot to Asia

Considering Britain’s current existential crisis over its relationship with the EU and France’s worsening economic malaise, is President Obama looking to Germany to assume the role of transatlantic partner in his second term?

Berlin now stands out as Washington’s go-to capital in Europe. Chancellor Merkel is in the driver’s seat when it comes to the eurozone crisis. Britain is distancing itself from the EU. The French and Italian governments are weak. EU institutions in Brussels are facing lagging public confidence. This political landscape provides Washington a strong incentive to deepen its ties to Berlin.

Is Germany ready to assume a leadership role in Europe? Or does it remain skittish about flexing its muscles on the continent?

Germany has regained comfort with taking a leadership role in Europe--especially on economic issues and the trajectory of European integration. Berlin is less comfortable with leadership on security issues, preferring to take a back seat when it comes to the projection of military force. Its reluctance was particularly pronounced when it came to NATO’s intervention in Libya. Although Washington would prefer that Berlin be more forthcoming on defense issues, Obama and Merkel see eye-to-eye on giving top priority to jobs and growth.

The EU-U.S. free-trade negotiations, which kick off next month, just barely survived a French veto. Does Obama need Merkel to sell the TTIP to her constituents--and other European leaders--to ensure a successful outcome?

"The prospect that TTIP will promote jobs and growth on both sides of the Atlantic gives the negotiations a good chance of success."

There is strong support for TTIP on both sides of the Atlantic. However, American and European leaders will have to carefully navigate potential domestic opposition as the negotiations proceed. A deal is by no means assured. But the prospect that TTIP will promote jobs and growth on both sides of the Atlantic gives the negotiations a good chance of success.

What does the choice of the Brandenburg Gate, site of arguably the two most important foreign policy speeches given by U.S. presidents, tell us about the kind of legacy Obama is looking to leave behind?

By choosing the Brandenburg Gate as the site for his speech, Obama set a high bar. With a divided Europe as their backdrop, John F. Kennedy and Ronald Reagan had an easier time delivering a historic address. Nonetheless, Obama aimed high, offering an inspirational speech that combined lofty idealism and pragmatic realism.

Explore More on Heads of State and Government

China’s colossal infrastructure investments may usher in a new era of trade and growth for economies in Asia and beyond. But skeptics worry that China is laying a debt trap for borrowing governments.