Skip to main content
The Pitfalls of Israeli-Palestinian Peace Talks

Aaron David Miller, a former senior negotiator in the Mideast peace process who served Republican and Democratic presidents, says that the peace talks brokered by the Obama administration have suffered from a lack of urgency on both the Israeli and Palestinian sides. Miller says Israeli prime minister Benjamin Netanyahu is driven by "maintaining Israeli security in a fraught, broken, angry, dysfunctional region," rather than by motives for lasting peace. On the Palestinian side, he says, leader Mahmoud Abbas "probably wants an agreement but doesn’t have the capacity to deliver one." 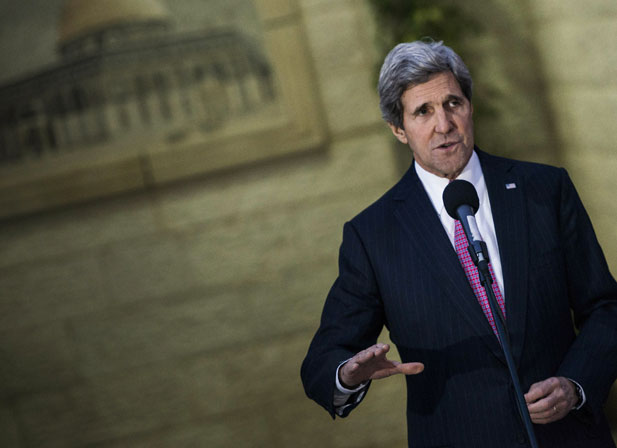 When President Obama took office, one of his first actions was to name former senator George Mitchell as his special envoy to the Middle East. His efforts ended in failure. Secretary of State John Kerry made the Middle East one of his highest priorities. Now those talks have also ended without success. Why has it been so hard to reach an agreement between the Palestinians and the Israelis?

In order to do this deal, you have to resolve a witch’s brew of issues. You’ve got security, historical trauma, religion, identity, and territory. In none of the other previous agreements—Israel-Jordan and Israel-Egypt, for instance—did you have quite that combination. In order to create traction, let alone a conflict-ending solution, you need three things. And those three things, frankly, are missing.

Number one: You need leaders who are masters of their political houses, not prisoners of their political constituencies. Number two, you need a sense of urgency, which simply does not exist right now enough in sufficient quantities on the Israeli and Palestinian side. And finally, you need a sense of ownership. I participated in the last serious effort to do this at Camp David in July 2000, when we had three empowered leaders [U.S. president Bill Clinton, Israeli prime minister Ehud Barak, and Palestine Liberation Organization leader Yasir Arafat] who nominally seemed to be committed to reaching some sort of an agreement. Unfortunately, there was much more ownership on the U.S. side than on the Israeli and Palestinian sides. And that clearly is the situation today.

If the time is not right, if the factors for an agreement are not right, then it becomes an issue of Kerry’s time, rather than time for an actual conflict-ending solution. And that is really the bottom line. Had [former U.S. special envoy for the Middle East] George Mitchell asked me whether he should have taken on the job as special envoy, had John Kerry asked me, I would say absolutely. This is an important effort. It’s important to U.S. national security interests. But if you take it on, you should be prepared for the very real probability that you will not succeed.

Let’s analyze it from both the Israeli and the Palestinian sides. Why could they not come together?

First of all, you have what I call the maximum-minimum problem. The maximum Netanyahu is prepared to offer on the six core issues are Jerusalem, borders, security, refugees, recognition of Israel as the nation-state of the Jewish people, and end of conflict and claims. This simply does not meet the minimum that the Palestinians are prepared to accept. I’m just reporting here. I’m not trying to identify who is more to blame. The reality is that neither Netanyahu nor [Palestinian Authority president] Mahmoud Abbas are prepared to pay the price of a conflict-ending agreement, which resolves the six issues conclusively so that there are no more claims to be pursued and all irredentism has been abandoned. Kerry has not been able to even come close to resolving it.

Then other problems kicked in, like the question of fundamental mistrust from both sides and the complexity of domestic politics. On the Israeli side, you have a coalition, even though Netanyahu is a permanent fixture and feature of Israeli politics. He’s not some sort of speed bump that will somehow disappear. He’s now the longest continuously surviving Israeli prime minister in Israel’s history, and he has no real opposition. Enough Israelis respect him, and given the vagaries of coalition politics, he’s there for quite some time. But he has a coalition that, frankly, isn’t inclined to support the kind of conflict-ending agreement that the Palestinians and the Americans would like.

On the Palestinian side, you have a curious situation of a leader, Abbas, who probably wants an agreement but doesn’t have the capacity to deliver one. You have a Palestinian national movement that looks like Noah’s ark. There are two of everything: constitutions, security services, sponsors, prime ministers and visions of where Palestine is and what’s between Hamas and the Palestinian Authority. It’s difficult to imagine a unity agreement. Hamas has to recognize Israel’s right to exist, and accept previous agreements. So you have this enormous gap.

Do you think that Netanyahu was ready to recognize a Palestinian state?

Netanyahu is a man whose self-image is not driven by becoming the midwife or father of Palestinian statehood. It is delivering Israel from the shadow of the Iranian bomb, and maintaining Israeli security in a fraught, broken, angry, and dysfunctional region. It is not that of a peacemaker. There was a mistaken assumption that somehow, he could be courted into making these decisions.

Second, there was an assumption that the Palestinians could somehow be nudged off of their consensus. Even in the old days, when we were doing this, Oslo was the last concession that [former Palestinian leader] Yasir Arafat made. And he clung tenaciously, ferociously to a consensus, which envelops Abbas as well. And it’s a consensus that leaves very little margin for historic decisions. The issue of territory has to add up to 100 percent, and may involve territorial swaps of equal size and value. Jerusalem has to be the capital of the Palestinian state. There has to be some semblance of a dignified resolution of the Palestinian refugee problem, even if it doesn’t involve anything more than token returns of refugees. There has to be a concept of security that doesn’t suck all of the sovereignty out of a Palestinian state. And constructing a negotiation based on Palestinian consensus, and an unwillingness or an inability on the part of the Israeli prime minister to accept it, basically leads you to failure.

Did this lead Kerry to frustration?

[Kerry] believes in negotiations. He believes in diplomacy, and that this truly was the last chance. He fundamentally misjudged how he could move both sides in a sort of last-chance environment, and his statements reflect that. He crossed the line by identifying the very real danger of Israel emerging as an apartheid state if there were no two-state solutions. But this is part of peace. He has said that there will be violence, there will be boycott, that Israel will lose its demographic majority and no longer be a Jewish state. Some of these things may be true, but it is virtually impossible to frighten, scare, or push Israelis and Palestinians into making these kinds of existential, politically risky decisions if they’re not motivated to do so. There simply isn’t enough urgency and ownership right now to get them to make those decisions.

So where do we go from here? Do you think there will ever be a deal?

The real [issue] for the United States is that it is adrift in a kind of peace process Bermuda Triangle. It’s caught between a two-state solution that the administration feels is simply too important to abandon, and a two-state solution that simply can’t be implemented. And it is within that political space that the secretary of state and the president will have to figure out how to manage during the course of the next eighteen months to two years. The options are not good.

You go from there to more drastic approaches, and do what my old boss [former secretary of state James] Jim Baker did. You can give out your phone number and basically say, "Call us when you’re serious," and allow nature to take its course. You can allow the international community to become more bitter and angry at the Israelis, and to try to pressure them to change their minds or allow the process to surrender to violence—and there will be violence. You could wait to see what kind of impact these unity talks have. Will it result in an effective, authoritative government, or is it a tactical unity? I can’t imagine that these unity talks will do much else than provide a gift to every Israeli who’s looking for an excuse not to participate in this peace process.

There is no honest answer to the question of what the United States does now. And frankly, there shouldn’t be. Because we need to first understand the nature of the problem before we run around trying to fix it.