The Permanent Court of Arbitration in The Hague rejected critical aspects of Beijing’s claims over waters in the South China Sea on Tuesday. The tribunal’s findings uphold the need for a rules-based order to counter Chinese efforts to establish a modern-day sphere of influence, says the U.S. Naval War College’s Andrew Erickson in a written interview. "It would be best for the [Asia-Pacific] region, and China’s standing within it, if Beijing exercises restraint and respects the tribunal’s ruling," says Erickson. For its part, the United States should carry out more robust freedom of navigation operations (FONOPS) to protect international law and norms, he says. 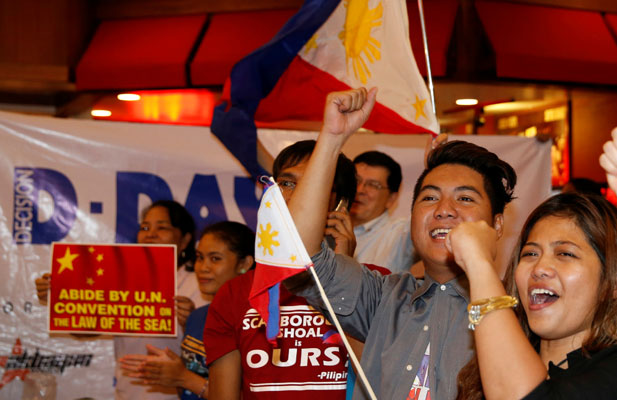 Activists who travelled to disputed Scarborough Shoal and were blocked by Chinese Coastguard a few months ago react after a ruling on the disputed South China Sea by an arbitration court, Manila, Philippines, July 12, 2016. (Photo: Erik De Castro/Reuters)

What’s the significance of the UN tribunal’s findings?

The tribunal has upheld an open, rules-based order for a critical portion of the global maritime commons, saying all are welcome to use it without favor or fear. It does so by rejecting the legal basis for the vast majority of Beijing’s sweeping maritime claims in the South China Sea. U.S. State Department Spokesperson John Kirby welcomed the decision as "an important contribution to the shared goal of a peaceful resolution to disputes in the South China Sea." Still, Washington can make its own contribution by helping to ensure that right prevails over might, and lead by example by finally ratifying the UN Convention on the Law of the Sea, which it already abides by in its maritime operations.

Why does the ruling matter?

The South China Sea is a vital global artery that many depend on for their livelihoods. But it is home to disputes over land features and waters among multiple nations. Only under a reliable rules-based order can it remain open, free, safe, and prosperous. The tribunal’s twenty-first-century vision of laws to bind strong and weak nations alike is a bulwark against Chinese efforts to pull this maritime region back into a nineteenth-century-style sphere of influence.

How did this case come about?

"Only under a reliable rules-based order can [the South China Sea region] remain open, free, safe, and prosperous."

In recent years, the Philippines suffered multiple predations as Beijing peeled away South China Sea features from Manila’s control. Chinese territorial nibbling culminated in the 2012 Scarborough Shoal incident, in which Chinese forces seized control of the disputed features, then reneged on a U.S.-brokered agreement to return to the status quo ante.

Beijing’s duplicity motivated former Philippines President Benigno Aquino III to initiate the case in January 2013. Unable to push back directly against Chinese bullying given its far more limited capabilities, and finding its appeals to the international community to be insufficient, Manila sought out the tribunal as a venue that has been used to address a range of international disputes.

What are the legal implications?

The tribunal ruled that critical aspects of China’s South China Sea claims have no basis in law, and hence are invalid. It was an unexpectedly clear judgement against murky Chinese claims, about as dramatic and unambiguous as international law gets.

"It was an unexpectedly clear judgement against murky Chinese claims, about as dramatic and unambiguous as international law gets."

The court also judged that the Spratly features that Beijing claims do not generate jurisdiction over waters beyond twelve nautical miles from any one of them. In doing so, it determined that Itu Aba, also known as Taiping Island—a feature occupied by Taiwan but claimed by China—is not a full-fledged island, which would give it a two-hundred-nautical-mile exclusive economic zone, but merely a rock, with twelve nautical miles of territorial waters.

In contrast to Beijing’s claimed policy of noninterference in other nations’ internal affairs, the tribunal found that China had in fact violated Philippine sovereign rights and jurisdiction, illegally interfered with Philippine traditional fishing rights, and unlawfully created serious risk of collision by engaging in unsafe navigational practices and obstructing vessels.

Contrary to the assertions of Chinese state media, the court ruled that Chinese activities have damaged the marine environment, particularly coral reefs. Finally, China’s extensive construction of artificial "islands" has not added additional maritime legal rights onto the features themselves, and has illicitly aggravated and extended disputes over the contested features.

Can it be enforced?

Ultimately, it will take more than the tribunal or international opinion to ensure that all parties remain committed to peace and stability in the South China Sea. Washington can help ensure that the rules-based order that the tribunal just upheld remains sustainable by taking proactive measures in concert with its regional allies and partners to deter Beijing from acting in ways clearly prohibited by international law.

"China’s extensive construction of artificial ’islands’ has not added additional maritime legal rights onto the features themselves, and has illicitly aggravated and extended disputes over the contested features."

China refused to participate in the case and vowed to disregard the ruling amid claims that the UN tribunal has no jurisdiction here. What should we watch for?

It would be best for the region, and China’s standing within it, if Beijing exercises restraint and respects the tribunal’s ruling, by which it is legally bound to abide. Having exhausted legal means to attempt to resolve disputed claims in its favor, however, Beijing may consider resorting to coercion or even, in some fashion, the threat of force.

In that regard, China’s "maritime militia" of military-controlled fishermen and fishing vessels offer a tempting tool tailored for Beijing to bring its strength to bear against its neighbors’ competing claims. This is no theoretical threat: maritime militiamen have performed frontline roles for China in multiple international sea skirmishes, including the Scarborough Shoal incident. Washington has made a serious error by not publicly calling out this shadowy force previously. The Obama administration must make up for lost time before Beijing engineers an incident—perhaps to complicate a U.S. FONOP near a Chinese-occupied feature in the South China Sea—or Chinese actions therein cause accidental escalation.

Now that there are clear rulings from the tribunal to uphold, I’m optimistic that the Obama administration will proceed expeditiously with an array of more robust FONOPs backed by determination and mettle. President Obama and his advisors have been criticized for only authorizing limited and cautious FONOPs, which some observers denounced as unworthy of the name. But Obama appreciates the importance of international laws and norms, and I believe he will see the wisdom in defending them robustly, thereby capitalizing on a final opportunity to shore up his Asia-Pacific legacy.