Skip to main content
A Reset for U.S. Surveillance Law?

A U.S. presidential panel has called for a series of restrictions on National Security Agency (NSA) practices, raising questions about the collection of data deemed critical to preventing terrorist attacks. If adopted, the changes would define the strongest limits on surveillance actions since the September 11, 2001 terrorist attacks. "The panel did not suggest that the government exceeded its legal authorities," said CFR Adjunct Senior Fellow Matthew Waxman. "But it found that the costs to some surveillance programs were not worth the gains." The president and Congress are likely to approve a number of the recommendations, Waxman says, motivated in part by ensuring public confidence in oversight of intelligence activities. 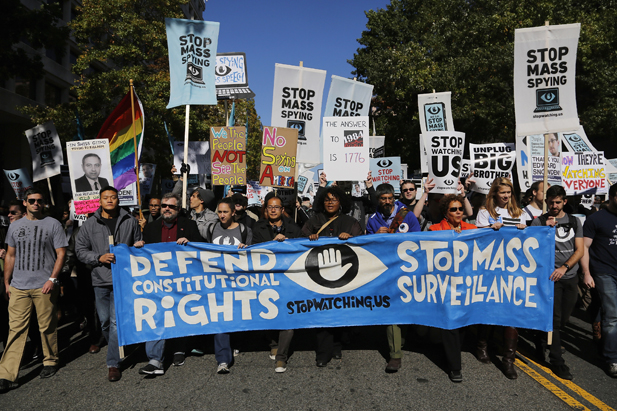 What is most significant about the panel’s recommendations?

More From Our Experts
Jacob Ware
The Violent Far-Right Terrorist Threat to the U.S. Military
James M. Lindsay
The 118th Congress by the Numbers
Christa N. Almonte
Inspiration in the Ranks

The report calls into question some major surveillance and intelligence practices that the government has been using and publicly defending as critical to preventing terrorist attacks or advancing our security. Perhaps the most high-profile move is the panel’s recommendation that the NSA cease storing all American phone call data itself, and instead to query that information from databases retained by phone companies, under a stronger set of checks.

Generally speaking, the panel did not suggest that the government exceeded its legal authorities, as many critics argue, but it found that the costs to some surveillance programs were not worth the gains. Those costs include not only privacy, but also consumer confidence in American technologies, diplomatic fallout, and other impacts.

The president has already rejected one of recommendation—splitting command of the NSA from the Pentagon’s cyberwarfare unit. What are the chances of other recommendations being carried out?

I can understand why there are calls to split up command over the NSA and the military’s cyberwarfare unit, but a very powerful reason for keeping them together is that they rely so heavily on the same capabilities and expertise. It’s not surprising that the president would reject that recommendation, which would carry immense costs and risks. Some of the other recommendations are much easier and less risky to implement, and I expect the president to do so. For example, putting in place better processes for reviewing surveillance of foreign leaders is a sound idea.

More From Our Experts
Jacob Ware
The Violent Far-Right Terrorist Threat to the U.S. Military
James M. Lindsay
The 118th Congress by the Numbers
Christa N. Almonte
Inspiration in the Ranks

Previous Supreme Court decisions have held that Americans don’t have Fourth Amendment protection for certain information, like telephone numbers that they’ve dialed, that they voluntarily convey to commercial service providers. Many people, including some Supreme Court justices, believe this constitutional doctrine no longer makes sense in a modern world of digital communications, cloud computing, etc. An advantage of working with Congress to craft tighter constraints on bulk data collection and analysis is that it may help head off adverse court opinions that cut deeply into other government programs or that cast new legal doubt over them.

Will the release of these recommendations influence competing surveillance reform legislation in Congress?

Yes. Some recommendations require congressional action—for example, the panel’s call to amend provisions of the Foreign Intelligence Surveillance Act and the way the Foreign Intelligence Surveillance Court, or FISC, operates. Coalitions of members of the intelligence committees have to date been pretty far apart on how extensively to reform surveillance statutes, but this report will put added pressure on Congress to act. Both the executive branch and Congress have a strong interest in ensuring public confidence in oversight by the intelligence committees and the FISC, so even if Congress doesn’t tackle the biggest collection issues, some legislative reforms to those external oversight processes is likely.

If enacted, would the recommendations on foreign surveillance lead to an easing of tensions with U.S. partners and allies disturbed by the extent of the surveillance activities?

Perhaps to some extent, though much of that frictional damage is done, and it’s hard to undo. The panel calls for some modest protection of foreigners’ information collected through surveillance programs and for limiting through review process the communication surveillance of some foreign leaders. These reforms probably wouldn’t have much impact in the short term, but they may head off diplomatic problems in the future.

It’s also important to keep in mind that for all the complaints coming from abroad, many of our democratic allies have their own major espionage operations and even more intrusive surveillance practices, with weaker oversight. Those allies also benefit from U.S. surveillance programs because the United States shares important intelligence and counterterrorism information with them.