Skip to main content
Split Persists Between Washington and Riyadh

Last week’s meeting between President Obama and King Abdullah of Saudi Arabia was meant to quell speculation that relations between the two long-standing allies had collapsed, says Brookings fellow F. Gregory Gause. But despite the assurances proffered by the Obama administration, serious differences over policy regarding Iran, Syria, and Egypt remain between the two countries, says Gause. On Iran, although Saudis voice support for the international negotiations to limit the country’s nuclear program, they worry that Washington is not doing enough to limit Iran’s growing influence in the region. They also believe that Washington should be doing more to buttress the anti-Assad forces in Syria and the military government in Egypt. "The United States and Saudis have some serious differences, and this meeting didn’t solve them," he says. 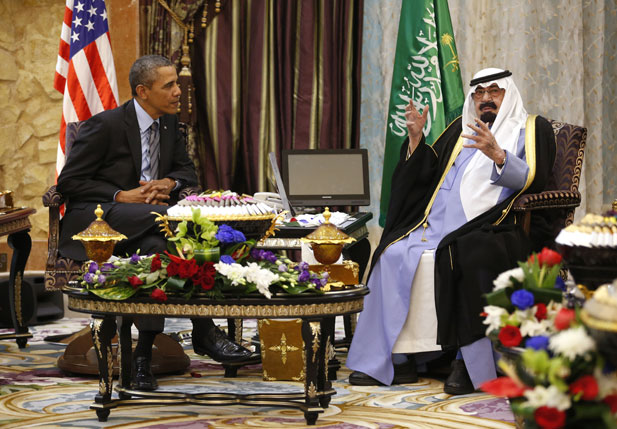 President Obama’s meeting with King Abdullah was overshadowed by news that Russian president Vladimir Putin called Obama in his Riyadh hotel to discuss the Ukraine crisis. What do we know about the two-hour meeting that was held at the king’s palace outside of Riyadh?

The meeting was important in the sense that there had been quite a bit of talk in Saudi Arabia and the Middle East in general about the coming collapse of U.S.-Saudi relations. In that sense, it was a reassurance meeting, but the official read-out was pretty modest. What the United States did was basically reassure the Saudis that some of the more wild interpretations of American policy that were floating around in the Middle East about the United States—leaving the Middle East, throwing over the Saudis, and allying with Iran—were just exaggerations.

Syria seems to be a sticking point. Do you think the United States will step up aid to the Syrian opposition?

The big rumor going around was that the United States was going to agree to give shoulder-launch missiles (i.e., MANPADS) to the Syrian opposition. But the official U.S. response coming out of the meeting was, "No, we don’t approve of that, and we don’t want to see those kinds of weapons introduced because who knows what’s going to happen to them after that." The United States and Saudis have some serious differences, and this meeting didn’t solve them.

Qualify some of the differences that are complicating the U.S.-Saudi relationship.

They revolve first and foremost around Iran. The Saudis have basically signed onto the idea that there’s nothing they can do to stop the United States and Iran from negotiating on the nuclear question. Officially they say that they hope the negotiations will achieve their goals. But it’s clear that the Saudis are extremely suspicious of the Iranians, and they’re as worried about the spread of Iranian power in the region as they are about the nuclear issue. They fear, I think rightly, that the United States puts a much higher stake on the nuclear issue than on rolling back Iranian power in Syria, Lebanon, Iraq, and other places that the Saudis are concerned about. So that’s a major difference. The United States wants Syrian president Bashar al-Assad gone, but we put a much lower priority on it than the Saudis do.

The other big issue on which there are differences is Egypt. While the United States has publically condemned the 600-plus death sentences that were issued last week against members and sympathizers of the Muslim Brotherhood, our position on Egypt remains somewhat muddled. On one hand, we keep talking about a democratic transition, but on the other hand, we also refuse to call the military coup a "coup" because we don’t want to be required by law to cut off our aid to the Egyptian military. Right now, we seem to be moving toward a position where we accept as fait accompli that [Abdel Fattah] al-Sisi will be the next president. As long as he maintains the peace treaty with Israel and continues to cooperate with Washington on military, intelligence, and political matters, we’ll probably have a decent relationship with him. Every once in a while, a human rights report or some comment from an American official urging greater democracy will spur some tensions.

The Saudis like Sisi, that’s clear. But why do they hate the Muslim Brotherhood so much?

The Saudis had a pretty good relationship with the Brotherhood back when they had a common enemy in Arab nationalism and socialism under President Nasser in Egypt. Lots of the Egyptian Brothers came, lived, and worked in Saudi Arabia [during that time]. But this changed during the first Gulf War, when most of the Brotherhood factions in the Arab world stood against Saudi Arabia and with Saddam Hussein against the U.S. military intervention. The Saudis have been suspicious of the Brothers since then, and with the upsurge in political activity in Saudi Arabia after the first Gulf War, lots of Saudi leaders blamed the Brotherhood as being the root cause of the politicization of Islam in Saudi Arabia. And with the Arab Spring and the victories of the Muslim Brotherhood in Tunisia and, of course, in Egypt, the Saudis started thinking that this notion of an electoral Islamism is something that is a threat to them in the long term. Certainly it has the possibility of putting Egypt forward as a competitor to Saudi Arabia as the leading Sunni-Muslim country.

Now, talk about the domestic politics in Saudi Arabia. The king is quite old and he has recently shuffled subordinate roles. Whom did he recently elevate?

There’s Crown Prince Salman, minister of defense and the former governor of Riyadh, who is a major figure. A couple of years ago, the king also appointed the youngest son of his half-brother, Prince Muqrin, as second deputy prime minister, which, for years, has been the crown-prince-in-waiting job—the number three guy. But then just last week, the king took the unprecedented step of naming Muqrin deputy crown prince. And in a very directly worded pronouncement, the king decreed that when Salman becomes king, Muqrin will immediately become crown prince.

That removed some amount of discretion from Salman, which is interesting. There are all sorts of stories circulating about why he wants to limit Salman’s authority, but they’re just stories and rumors.

How have these decisions been received in Saudi Arabia?

There’s growing uncertainty in the country about how this all going to shake out. The king might be trying to inject some certainty [into the succession process] with this appointment of Muqrin, but Saudi Arabia is an absolute monarchy. So when he goes and Salman comes in, there’s nothing to stop Salman from doing what he wants to do.