The political agreement reached by Iran and major powers on April 2 now spurs intensified talks to contain Iran’s nuclear program in return for lifting sanctions. The deadline for a final accord is June 30. The deal would limit the production of material that could be used to create atomic weapons and calls for periodic intrusive inspections. Yet while the agreement was more substantive than expected, it does not roll back Iran’s nuclear program, and inspection activities will still rely on Iranian consent, says CFR’s Ray Takeyh. It will also not assuage regional concerns, he says. “This deal is likely to lead to proliferation of nuclear technologies as Saudis and others try to procure their own enrichment capabilities at the level Iran has achieved,” he says. 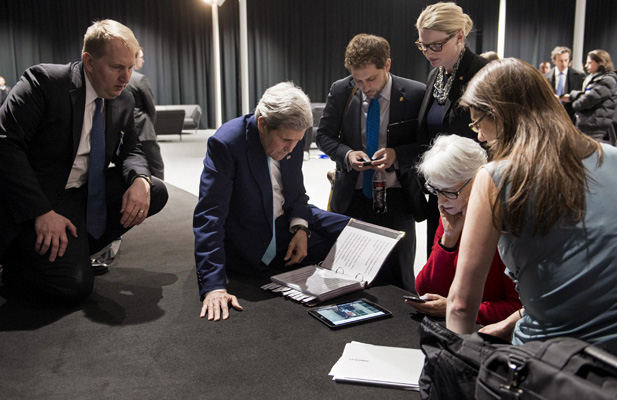 Diplomats said the framework agreement sets the foundations for a final deal on Iran’s nuclear program in three months, but many important issues remain unresolved. What was accomplished this week?

The negotiators managed to meet their deadline and produce an agreement that was more substantive and detailed than anticipated. The agreement addresses many issues including enrichment capacity and various Iranian pathways to the bomb. And it does so with restraints on Iran’s enrichment and plutonium capacities.

What in your opinion is the most significant aspect of the deal?

The fact that there were contrasting Iranian and American interpretations of the agreement. For instance, Iran’s official media claimed that sanctions relief was comprehensive and imminent, and provided some details that are distressing, such as the fact that the Fordow enrichment facility will contain one thousand centrifuges. A hardened facility that houses a large cascade is hardly ideal. The American side was vague on all this, which could portend some disagreements to come.

Does the deal provide a realistic chance for dismantling, or at least rolling back, Iran’s nuclear program enough to allay fears of it being a threshold nuclear power?

The deal has to be considered as freezing various aspects of Iran’s program for a decade. Thus, it does not really dismantle or roll back the program but sustains its current status and stipulates its expansion in the future upon expiration of the sunset clause.

The verification regime and other aspects of the deal appear to go farther and in more detail than Iran was willing to accept in previous public statements. How much has Tehran relaxed its positions?

The Iranian position has always been that the verification regime has to be based on the Nuclear Nonproliferation Treaty. And that has essentially been agreed to. Thus, all inspection activities will have to rely on Iranian consent for access.

Is there still a threat the U.S. Congress will move to impose additional sanctions when it reconvenes later this month?

There is probably a greater chance of legislation that argues that the Congress should have a chance to review the final agreement before its implementation. It would be difficult for the Obama administration to argue that Russia and China can have a say but not the U.S. Congress.

Domestic constituencies in the United States and Iran must support the deal for it to be sustainable. Is that going to be possible?

Iran is a dictatorship, and thus consent is more easily achievable. In the United States, this deal remains contentious and does not rest on a reliable domestic consensus.

How are other countries in the region likely to react to this framework agreement?

There is a great deal of concern in the region. This deal is likely to lead to proliferation of nuclear technologies as Saudis and others try to procure their own enrichment capabilities to keep up with the Iranians. For Israel, there are some tough decisions ahead.  Prime Minister Benjamin Netanyahu has already labeled this deal as a pathway to the bomb and an existential threat to Israel. How he reacts to this situation will determine his legacy more so than any other issue.

Many are saying these talks are too big to fail. Do you agree?

There is likely to be an agreement, as all sides are too invested in the process to stop. Whether it can endure, given the absence of consensus in the United States and the likelihood of violation in Iran is another issue.