The longer Ukraine’s central government continues to struggle to gain control of separatist areas in its southeast, the more chance they have of splitting off indefinitely, says Charles E. King, an expert on so-called "frozen conflicts" in the former Soviet Union. For Ukraine, absent a clear military victory, "you are going to continue to see these local entities creating their own governing structure such as they are." He says this was the pattern more than two decades ago when Abkhazia and South Ossetia split from Georgia, Transnistria separated from Moldova, and Nagorno-Karabakh seceded from Azerbaijan. In most instances, King says, the secessionists managed to win their wars with Russian assistance though they remain unrecognized as independent states by most countries. 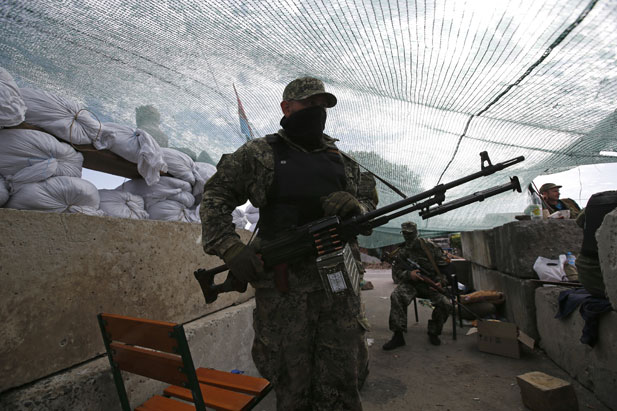 Russia’s strategy for eastern Ukraine has been described as actively destabilizing the situation while publicly denying it is doing so. Haven’t we seen this before in the post-Soviet space?

What you see in eastern Ukraine is a kind of model of Russia’s relationship with what used to be called the "near abroad," which developed in the early 1990s. That was a time when Russia and the other post-Soviet states were still working out what these new borders, which suddenly became international frontiers, were going to look like. And in some instances, for reasons that initially had little to do with Russia itself, a whole series of conflicts arose over the the stability of those boundaries: in Moldova, in the Transnistria region; in Abkhazia and South Ossetia, [which were part of] Georgia; and in Nagorno Karabakh, [which was part of Azerbaijan]. Some of those had some connections to Russia.

There was a major Soviet army that was in Transnistria at the time that found itself dislocated there. As violence became the order of the day, these states—that is, the recognized states—found themselves squeezed between secessionists and the interests of the Russian Federation. And, in most instances, those secessionists managed to win the wars of Soviet succession with some kind of covert or overt Russian assistance.

What followed is essentially how these "frozen conflicts" were created; that is, de facto states that nobody, or very few people, recognize as independent. The danger [today] is that the longer things go on in southeastern Ukraine with no clear military victory on the Ukrainian side, you are going to continue to see these local entities creating their own governing structures.

What are the lessons for Ukraine’s leadership from the frozen conflicts?

What you found in the other frozen conflicts is essentially the military defeat of central governments, not because they were taking massive casualties but simply because they kind of lost the will to fight. And what that produced was essentially the victory of a different kind of state builder: the Abkhaz or the Trans-Dnestrians, who created their own governing structures that rivaled those of the central government. Over time, the challenge becomes not so much patching together a country that has fallen into disunity, but rather, sewing together two functionally separate states. I don’t think we are there yet in Ukraine—we have got a long way to go before that kind of situation transpires. But we are on a path now that looks very familiar to those of us who were watching these other situations develop in the 1990s.

Any estimate on how much time Ukraine does have to reassert control before facts on the ground pose a major obstacle?

It can’t continue to fight in any sort of major way for more than a few weeks or a few months, at most. And the difficulty here, too, is that you are dealing with more or less guerilla forces that are in populated areas, where it is very difficult to assert full military control without risking civilian casualties. And, of course, the more the Ukrainian government tries to respond militarily, the more enemies it creates on the ground. It’s a classic counterinsurgency problem. But the degree to which the Ukrainian government can gain legitimacy on the ground in southeastern Ukraine is the critical feature here.

In all of the conflicts in the early 1990s, recognized states had exactly the same kind of problem: They exited the Soviet Union claiming they had a right to self-determination from the Soviet center, but then in turn, entities within those states said, "Well now we have the right to self-determination from you." It’s interesting that the military and elites in southeastern Ukraine are using the same kind of logic now.

What about the role of international actors like the EU, OSCE, and the UN?

In Abkhazia, South Ossetia, Nagorno-Karabakh, and Transnistria, the position of the international community was to support the territorial integrity of Moldova, Georgia, and Azerbaijan. The problem, of course, is that this is the precise issue at stake from the perspective of the secessionists in the negotiations, so it made it very difficult for the international community to have much leverage there.

Secondly, in all of these conflicts, Russia developed a policy of not particularly caring what the structure of a final solution was, so long as it had a hand in crafting it. So [regarding] the future status of these so-called secessionist groups in southeastern Ukraine, Russia has to play a role; otherwise, any kind of negotiating process will be moot from the very beginning. But the third point, and this is in some ways the tragedy of all of these places, is that negotiations themselves can be one of the things that perpetuates the conflict over time. All of the unrecognized states that are still with us from the 1990s show people’s ability to live with a kind of ambiguity regarding sovereignty over the long term, so long as people aren’t shooting at each other. Unfortunately, we’re still in the shooting stage in Ukraine, but we shouldn’t worry too much about ambiguity of sovereignty if, at the end of the day, the thing we are interested in is saving people’s lives.

Moldova looks poised to sign a political and economic deal with the EU, but could this be potentially shaped or hampered by doings in Transnistria? Is this going to be another flash point?

As countries like Moldova, Ukraine, and Georgia begin to move closer to the EU, [the question is how will this affect] secessionists or quasi-secessionists entities within them. So far, the indication from individual citizens is that while they are not enthusiastic about the EU in theory, they are actually quite enthusiastic about the EU in practice. For example, you’ve seen people from Transnistria applying for Moldovan passports because they permit visa-free [travel] within the Schengen area.

There is this sort of natural and rational attraction to EU membership once countries begin to move along that path. The difficulty is getting to that stage because when you are in the theoretical realm of, "Will the EU be a good thing or a bad thing for us?," then moving closer to the EU can have a deleterious effect on stability in these countries. But in practice, once people begin to see some of the benefits of association and you have a generational change, things can work a little more smoothly.

As a counterpoint, we have the newly christened Eurasian Economic Union. Is there any sort of rivalry there between EaEU and the EU association agreement?

No, I don’t think anybody sees the Eurasian Economic Union as any sort of major rival. Even the Kazakhs are putting the brakes on this by saying this is essentially [still] a trade bloc. Whatever grand visions [Russian president Vladimir] Putin might have had several months ago about what the EaEU would be, the crisis in Ukraine, Kazakhstan’s own skepticism, and Russia’s annexation of Crimea have all thrown obstacles in its path.