The United States and Germany must find a way to collaborate on issues like trade and the crisis in Ukraine despite "some very serious differences" dividing the long-standing allies, says expert William M. Drozdiak. He says that controversial U.S. surveillance practices will remain a bone of contention between the two nations "for the foreseeable future," but says the Obama administration is keen to keep Germany, Russia’s largest European trade partner, in its corner as it campaigns for broader sanctions against the Kremlin. 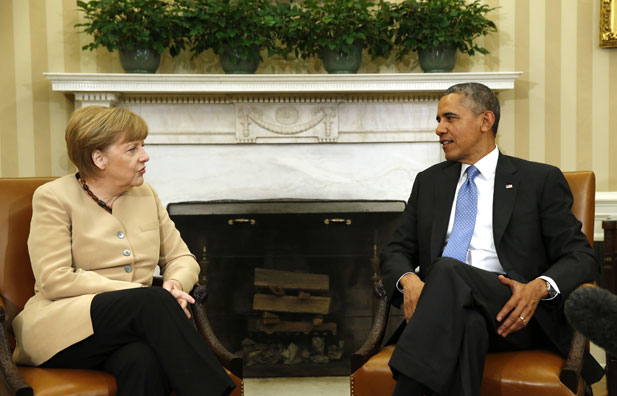 German chancellor Angela Merkel just made a twenty-four-hour visit to Washington, including several hours at the White House and a long press conference with President Obama. What is the overall state of U.S.-German relations right now?

There are some very serious differences dividing both sides. But both the Obama administration and the Merkel government realize they have to find a way to work together on a number of these challenging issues. And last Friday’s meeting, which lasted about four hours, concentrated on the continuing crisis in Ukraine and the fate of the trans-Atlantic trade talks, which are very important to Merkel, and of course the National Security Agency controversy and whether Germany would receive a no-spying pledge from the United States

On the last point, Obama indicated that they were still talking about that, but that the United States can’t make such a pledge to any country.

This is the crux of the problem. The Germans have been seeking for months a promise that U.S. intelligence agencies would not spy on German soil, and the United States said, "Look, we cannot set a precedent by giving you that blanket guarantee because other allies would ask for the same thing, not just in Europe, but also in Asia. And this would create holes in efforts to prevent terrorism and other security threats in the United States." So there is an impasse on this issue, and it will remain a sore point for the foreseeable future.

But of course, the big crisis now is Ukraine. I see in both German and U.S. press that German industry is strongly opposed to major sanctions on Russia.

[There is] no question that Germany, which is the largest trade partner with Russia, would bear the brunt of damage from [further] sanctions. The [Obama] administration is aware of that, and has been very careful to bring Merkel and other Europeans along because it realizes the West needs to present a united front against Russia on any sanctions going forward.

The first two rounds were actually relatively mild. Any further Russian incursions that disrupt the May 25 Ukrainian presidential elections may bring about more severe economic sanctions. Germany feels quite vulnerable in this respect because they have more than six thousand companies involved in trade and investment relationships with Russia. And more than 300,000 jobs in Germany are directly linked to this economic relationship.

Before the Iran sanctions, the Germans had $6 billion in trade with Iran; Russia would be even larger. One concession was that Obama did not mention the oil and gas sector in his press conference. Russia supplies one-third of German energy. Americans hope this will alleviate German concern in this respect.

Such notable figures as Helmut Schmidt, former chancellor, and others have spoken out on the futility of sanctions and [the need] to keep a dialogue going with Putin. [This is] not to mention former chancellor Gerhard Schroeder, who has business relations in Russia and was in St. Petersburg earlier this week celebrating his seventieth birthday at a party given by Putin and Gazprom. Several German politicians also attended, including from Merkel’s party.

I thought Obama was very careful to say that he understood that Russia had a legitimate history of close contact with Ukraine. And it seemed that he was trying to give Putin a wide berth so long as he did not send troops into Ukraine. But it was also crucial for the May 25 elections to go ahead.

From now until May 25, they are trying to send a combination of signals that tough sanctions are looming if Russia does anything overt, and at the same time letting Putin know that there are exit ramps from this crisis. This is particularly important for German foreign minister Frank-Walter Steinmeier, who is interested in keeping trade ties alive.

Is Merkel likely to try to serve as an intermediary with Putin to try to head off a crisis that would disrupt the May 25 elections?

She has spoken with Putin regularly, three or four times a week, since the crisis started. Putin himself says Germany should serve as intermediary in brokering a solution. Merkel made it clear Friday that any further incursions or stepped-up efforts by Russia to destabilize the May 25 election will make harsher sectoral sanctions inevitable, though she expressed the hope that this will not come to pass.

Do you think the release of the [Organization for Security and Cooperation in Europe] monitors was the direct result of Merkel’s conversation with Putin, or just a coincidence?

It’s hard to tell. I saw Merkel in a small group late Friday, and she said she spoke to Putin on the phone about the hostages just before coming to Washington. She said he seemed either unwilling or unable to make any commitments about securing their release, but it is no small coincidence that it happened after she returned to Germany, as he would not want to be seen buckling under pressure from Obama or doing him any favors in advance of his meeting with Merkel.

What’s the next step—an EU foreign ministers meeting on May 12? Will sanctions be taken up?

They are backing themselves into a corner. That is why Obama was trying to say that Russia had legitimate interests in its neighbor, and that’s why the May 25 elections must take place—so that a legitimate and democratic government can take power in Kiev.