The Obama administration should ramp up military aid to Ukraine, including the provision of defensive weapons, such as anti-tank systems, says former U.S. Ambassador to Ukraine Steven Pifer. He says this equipment would help Ukraine’s relatively modest force deter a renewal of Russian aggression in the east, where a cease-fire with Moscow-backed separatists is fraying. Pifer says the conflict will continue to simmer until Russia decides it’s time to settle and, in the meantime, recommends that the United States and its allies keep up the economic pressure. "That means keeping sanctions on [Russia for] months or years if necessary," he says. 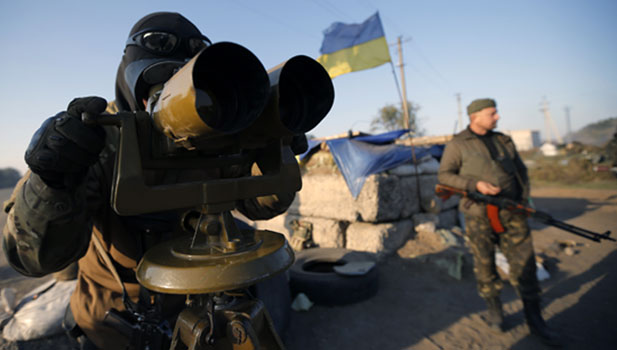 It’s been almost a year since the outset of street demonstrations in Kiev that led to the ouster of President Viktor Yanukovych and Russia’s seizing of Crimea. How do you see Ukraine unfolding in coming months?

There’s been a cease-fire in place since September 5—the so-called Minsk agreement—but it’s very frayed. [There has been] constant fighting around the Donetsk airport for the last four or five weeks. The Russians have not withdrawn their forces or equipment, and in fact we’ve seen reports suggesting that more Russian equipment is going into eastern Ukraine. So the evidence suggests that the Russians are not prepared for a settlement that would be on terms remotely acceptable to Kiev.

Some people think we are at the beginning of a new Cold War. How serious is this in big power terms?

Certainly the U.S.-Russia and the West-Russia relationships are at their lowest points since the end of the Cold War in 1991, but I would not describe this as a new Cold War. The confrontation between the West and Russia is focused on Ukraine, but it doesn’t have that global characteristic. Russia simply is not the superpower that the Soviet Union was. So we’re not yet back to a Cold War, but it’s certainly a very difficult period for relations between the United States and Russia and between Europe and Russia.

Talk about the new government in Kiev. They had parliamentary elections, and it’s been said this is going to be sort of a pro-EU government. But what does that really mean?

The parliamentary elections that were held on October 26 have put in place parties [which mostly] have strong reform and pro-EU platforms. So it should be possible for the [current] coalition-forming process to produce a strong and stable majority in the parliament that would establish a government that, hopefully, works with President Petro Poroshenko.

What Ukraine really needs at this point—not only in terms of dealing with Russia but also in dealing with domestic issues such as economic reforms, adapting the energy sector, and anti-corruption—is a strong alliance between the president, prime minister, and the parliament to make some decisions that are going to be politically very difficult. That’s going to be a test. Can they make these decisions on economic reform that are going to involve some near-term political pain? Hopefully they can appeal to the Ukrainian people and say "these are steps we have to take if we’re going to put our own house in order and begin to develop like a normal country and a normal economy."

Is there enough financial aid coming into Ukraine?

There is significant aid coming from the International Monetary Fund, but most economists are now saying that Ukraine will probably need more in the next year—I’ve seen one estimate of $10 to $12 billion dollars on top of the IMF [funding]. It will be important and appropriate for the West to see if they can mobilize that kind of funding. But it will also be important that the West first insist that the Ukrainian government take the hard steps on economic reform.

It makes no sense to send money into Ukraine if it’s not taking steps that will allow them to get to a place a couple of years down the road where they don’t need foreign assistance. The president and prime minister understand they have to take these steps, but there’s going to be some hesitation because it’ll be politically painful. For example, it’s not popular when you raise energy prices for every household in the country.

What about the natural gas deal between Ukraine and Russia?

With the help of the European Union, Ukraine and Russia [signed] a deal about two weeks ago under which Ukraine will probably buy between four and six billion cubic meters of gas from Russia between now and the end of March. The deal has a chance of sticking because all three parties have a strong interest in making it work. Ukraine needs the gas to get through the winter. The Russians, in particular Gazprom, very much want to have the money and be paid backed on some old gas debt. And then the European Union very much wants to see this work because they fear that a total breakdown between Ukraine and Russia might disrupt the flow of Russian gas through Ukraine to Europe. So all three parties have an interest in making this deal work—it’s probably the one bright spot in the tension between Ukraine and Russia.

How should the United States and its NATO allies support Ukraine militarily?

The U.S. government is providing Ukraine about $120 million this year, but it’s non-lethal assistance. It is time to consider providing more aid, including some lethal assistance [such as] defensive arms like light anti-tank weapons.

The United States is concerned that if the West were to provide weapons to Ukraine the Russians would escalate. I can understand that but I see it a different way. I would argue that providing the Ukrainians some defensive capability above and beyond what they have would allow them to deter a renewal of Russian aggression. The Ukrainian military learned in August that they can’t stand up to the Russian army and so they’re not eager to launch major hostilities again because they know what will happen.

What do you think is going to happen as winter comes?

There’s a best case, a worst case, and a most likely case. The best case is that you could actually build on the Minsk cease-fire and get a negotiation process that would have some traction and would lead to a settlement. Unfortunately, that’s not likely. The worst case is that with the current fighting around Donetsk, things just spin out of control. The cease-fire collapses completely, and you have a resumption of wide-scale fighting.

"Providing the Ukrainians some defensive capability above and beyond what they have would allow them to deter a renewal of Russian aggression."

The most likely case is that we’re going to see something that looks pretty much like the last two months. There’s a cease-fire nominally in place [and] it holds in some places, but you’re going to see some areas (for example around the Donetsk Airport over the last five weeks) where there’s continuing fighting. You’ll see continuing talks about talks but probably no real traction in terms of moving those negotiations to a settlement that would be acceptable to Kiev and Moscow and the separatists.

What do you think would persuade the Russians to settle?

The West’s best option is basically to persuade the Kremlin that the economic sanctions will stay on until there’s a change in Russian policy. That means keeping sanctions on months or years if necessary.

By many accounts the sanctions are having a significant economic impact. The ruble hits a new low against the dollar and the euro almost every week. There’s now talk of capital outflow this year of $100 to $150 billion. The Russian central bank has basically come out and said that in 2015 the Russian economy growth will be zero and in 2016 it’ll be 0.1 percent. So there are lots of indications of an economic impact caused in part by the sanctions, but [the sanctions] haven’t yet achieved the political goal. Part of the key to having the sanctions succeed is making absolutely clear to Mr. Putin that they will stay on until Russia adopts a new course.