Fresh off his victory hosting the Sochi Winter Olympics, Russian president Vladimir Putin faces a critical geopolitical test in the aftermath of former Ukrainian president Viktor Yanukovych’s ouster this past weekend. Veteran journalist Serge Schmemann believes that Putin "is watching very carefully and will not act in haste." Rather than marginalize Russia, he recommends that the European Union and United States try bringing Putin "into the tent" for a joint effort to stabilize Ukraine. And despite the formidable challenges that lie ahead, Schmemann says he is heartened "that so many leaders right now are urging each other to be responsible" and avoiding actions that could plunge the area into greater tensions or even combat.

How do you think Russian president Vladimir Putin will respond to the ouster of former president Yanukovych? So far, he’s been quiet.

Putin is giving it a long, hard think because he never really had that much faith in Yanukovych. Yanukovych was a difficult guy, who was really looking out for himself and was very corrupt. He was not a reliable partner. The things he did spurred a lot of disharmony in Ukraine, so I’m not sure that Putin was that sad to lose Yanukovych. Right now, it seems that the Ukrainian nationalists are in charge in the Parliament, but who knows how long that will last. There’s a presidential election set for May 25; we’ll see what candidates emerge.

In all this disarray, I think Putin is watching very carefully and will not act in haste. He has the power, of course, to do a lot of damage. He could close off the borders between Russia and Ukraine and he’s already agreed not to send any more money. So he could inflict a lot of damage to Ukraine, which is already suffering economically. And that’s why it’s crucial for the United States and Europe not to gloat but to try [including] Putin in any solution. This is a chance to bring him in, to somehow make clear to him that this is no longer a tug-of-war. It’s a lose-lose situation if the place gets even more chaotic. Right now, Ukraine requires a large infusion of capital and a lot of encouragement to create a stable government. So before he makes up his mind, it is crucial to try to bring him into the tent. That’s a very important next step. 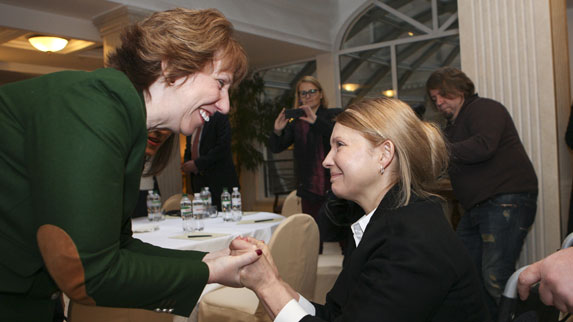 There was a lot of telephone diplomacy this past weekend: President Obama spoke to Putin, and Putin spoke to German chancellor Angela Merkel. And EU Foreign policy chief Catherine Ashton arrived in Kiev on Monday. How can world powers help ease Ukraine’s transition?

Catherine Ashton is there to assess the situation, and Christine Lagarde, the director-general of the IMF, has been doing the same. And Merkel, Putin, Obama, and Secretary of State John Kerry have all been talking. I think they’re all exploring and that’s a good sign. (There was a strong negative statement from Russian prime minister Dmitri Medvedev, but that was for domestic consumption.)

It’s Putin who’s going to have to make up his mind. He’s coming off a high from the Olympics. He could become a spoiler, but this may be a time when he finally joins forces. He’s seen that efforts to try to manipulate the government of Ukraine have failed, and he’s tried it twice with Yanukovych, first with the bad elections in 2003 then with what he did back in August to prevent the European Association Agreement. He’s realized there’s not much he can do to manipulate it and that the place is on the verge of civil strife, which is really not in his interest. And it’s not in the interest of the Russian speaking part of Ukraine.

What role can Germany play in stabilizing the situation?

The western Europeans have been divided on the issue of Ukraine and that’s how the Association Agreement came about. It was something way short of membership. The Poles, the eastern Europeans, and the Swedes wanted very much to encourage the Ukrainians to move westward, but France and Germany were not particularly keen on throwing money at Ukraine, especially with the corruption that is so rampant there and the oligarchs who run the place. So I wonder if Merkel is going to be keen to commit a lot of money, but she will be under a lot of pressure right now, both from within the EU and from the United States, to come up with a viable aid package. And we’re talking billions of euros, something very substantial to prop up Ukraine.

What are the risks facing Ukraine in coming days?

If it came to bloodshed between east and west in Ukraine, the Russians would be under very strong pressure to intervene on behalf of fellow Russians. They have their interests down in Crimea, so the situation is obviously very dangerous. I personally suspect that the Russians have absolutely no interest in going in militarily. Their incursion in Georgia in 2008 cost them huge amounts of international prestige. They’ve just come off fairly successful Olympics games. I don’t think that this is something Putin wants at all, but it’s something he could be drawn into and that’s probably why they’re talking with NATO. Everybody right now is trying to tell each other: "Listen, be careful. This is still a very dangerous situation."

The situation in Ukraine has been played up very much as east versus west, good guys versus bad guys, but we know the Ukrainian experience. When they had the last Orange Revolution, the government that followed fell apart, and internal squabbling led to Yanukovych being honestly elected. It’s a very, very divided country and not only divided in half. I know many Russians in Ukraine who are not pro–Russia the country, but want to defend their language and their history and all that. So it’s not a clean divide.

Who do you see emerging in the Ukrainian leadership?

It will be a huge undertaking to form a national unity government. Yulia Tymoshenko is back. She’s already tainted, but she’ll probably make a stab. Vitali Klitschko, the boxer, is a very attractive figure: he’s got a doctorate and he’s a world-class boxing champion. Plus, he’s against corruption, he’s moderate, and he wouldn’t want to cut off Russia. But he’s got no experience in government. The oligarchs there are also not going to be too keen on somebody who’s going to battle corruption too valiantly. A lot of factors to watch, but it’s heartening that so many leaders right now are urging each other to be responsible.

This would be a really good time for a G8 meeting. What are the next steps?

You can get foreign ministers on short notice for something like this, but this is not a NATO issue. This is about the EU and United States: Ashton, Kerry, and Obama are moving, so the key actors are in play. But they’re going to have to decide how much money is on the table. Then they’re going to have to make clear that they’re prepared to disperse it and, above all, what their conditions are. What kind of government? What kind of reforms? They have to make very clear to the Ukrainians what they expect.