Skip to main content
The View From Germany on Greece

Germany’s tough negotiating tactics during July’s Greek bailout negotiations, in which harsh austerity measures were exacted on a once-defiant Greek leadership, have been characterized as "one of the most brutal diplomatic démarches in the history of the European Union." But Ulrich Speck, a visiting scholar at Carnegie Europe, cautions against framing this latest chapter in the troubled currency union through the "reductionist" lens of Germany versus Greece. Germany’s insistence upon reform, "is not about inflicting humiliation or exacting revenge. Rather, it’s about making Greece economically viable in the long term," he says. Speck also rejects the narrative of European Union decline. “Things are in flux but this doesn’t mean the EU isn’t working," he says. 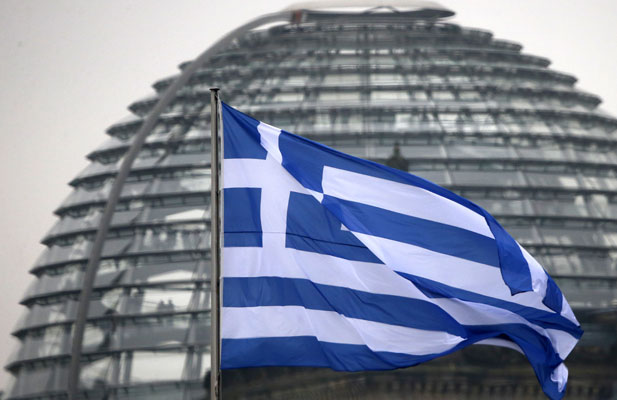 The latest round of negotiations was almost uniformly characterized as a humiliating capitulation for Greek Prime Minister Alexis Tsipras and Greece. Did Germans see view the agreement as a victory?

More From Our Experts
Liana Fix
Germany’s China Policy: Has It Learned From Its Dependency on Russia?

There was no triumphing on the German side. The whole idea that this [debt crisis] is Germany versus Greece is reductionist—if not flat-out wrong. This is really about the eurozone, nineteen countries all in all. And the Finns, the Baltics, and the Slovaks were rhetorically more hawkish than Germany was.

One of the most controversial proposals in the last round of negotiations was the idea of a temporary Grexit, floated by German Finance Minister Wolfgang Schauble, a proposal that he has since reiterated. How strongly does this point of view differ from Chancellor Angela Merkel, who said from the beginning "if the euro fails, Europe fails"?

"There is a very widespread view that the Greeks have not accepted reforms that other members have, and this sentiment is guiding a lot of eurozone politics."

I don’t think the chancellor was on the side of those who would prefer a temporary Grexit. She would prefer to have Greece in, but not at any price. It’s harder to figure out Schauble’s strategy. This is a poker game, to some extent, and Grexit has been used to pressure Greece on the reform program. Grexit is the ultimate consequence if Greece does not change its path. In the German view, [these negotiations] are about reform.

Do Germans want a Grexit?

The opinion polls show that Germany is divided on this issue. Some have come to the conclusion that the currency union cannot work with a Greece that is not playing by the rules. That is one opinion. But as we saw in the recent debate in the Bundestag [the German parliament], CDU (Merkel’s party, the Christian Democratic Union) and the SPD (the Social Democrats and CDU’s coalition partner) all agree that Greece should remain in the eurozone, but only if the country moves forward on reform and shows commitment to becoming economically more competitive.

More From Our Experts
Liana Fix
Germany’s China Policy: Has It Learned From Its Dependency on Russia?

The central Europeans have a very interesting take about this issue. They say, "We also had austerity but we went through this and did not make a big fuss about it. We know how to take hardship; you need political will, you need a society that is capable of getting through this in solidarity." There is a very widespread view that the Greeks have not accepted reforms that other members have, and this sentiment is guiding a lot of eurozone politics. The spotlight is really on Germany because they dominate the debate, but there is a huge silent majority that favors Grexit, or at the very least, supports the now-toughened line of Berlin and Brussels.

In the United States, the Greek debt crisis has often been characterized as one of austerity versus stimulus. Is this fair? Where do structural reforms fit into that conversation?

There were always three elements: bailout, austerity, and reforms. And we saw bailout and austerity, but this third pillar of this package is essential because this is about the long-term future of Greece (and about mid-term recovery). The issue of reform has been always in the background. From a German perspective, this is now really the key point. It is not about inflicting humiliation or exacting revenge. Rather, it’s about making Greece economically viable in the longer term. It is reforming the Greek economy so that it is competitive inside the eurozone.

What we see now are attempts to reform Greece inside the eurozone, but the European community—in Brussels, Berlin, and Frankfurt—does not have real instruments, because the EU is not a federal state. In a federal state you can just dictate from the center, and the individual state has to comply. But in this case, we have a suffering Greece that needs to accept and implement reform. They need to "own the reform.” Otherwise, there is little the European community can do, and this is why Grexit came into play [in the last round of negotiations].

Some would argue that Greece’s ruling Syriza party is a product of five years of austerity. How can any Greek government implement some of these really painful reforms in light of the volatile political climate?

Reforms are always painful, there are winners and losers, and some of those who are privileged will lose. So it’s a big struggle and it’s a very difficult thing to do. No government likes to put pain on parts of the voters, especially on groups that are powerful and well-connected. For years, Greek governments did not think they needed to go down that road because they thought that they had huge leverage with the economic contagion of a Grexit. But given the changes in the eurozone, which has became more solid and stable, this is no longer the case.

So now we have a moment, or a situation, where a Grexit is economically thinkable and politically possible. We don’t talk about the "PIGS" anymore; Portugal, Ireland, and Spain are back on track. They went through the crisis but now they see light at the end of the tunnel, while the Greek case is different. The whole picture has changed, Greece today has much less leverage than it had before. So now you have a real outside pressure to reform, which was not the case in the last five years.

What does it say about the current state of affairs in Europe that a once-taboo Grexit is now being openly proposed and discussed? Has ever-closer union been replaced by nationalist politics?

The idea of the EU becoming a federal state reached its limit. There’s no vision guiding the European project anymore. There’s a risk of disintegration: Grexit, Brexit [a potential British exit from the EU], and the [far-right Euroskeptic] National Front party in France. For a long time, Europe was driven by this federal image of a state, where the parliament and the commission would become the nucleus of the state. Today this vision is largely gone and it is member states that are largely driving the European Union, with Germany in the lead. So we have a new situation where the big member states are playing a bigger role. We have a lot of day-to-day management often driven by Germany, we have a murky institutional mix of federation, confederation, and supranational institutions. And there’s no real effort to create a new architecture, or to have at least a debate about where we are heading in Europe.

At the same time, we see many countries that still very much want to join the EU. There is a huge interest in the EU, both on the inside and outside. The attraction is still there. Even in Greece, we see a large majority that wants to stay in the eurozone.

Things are in flux but this doesn’t mean the EU isn’t working per se. So I wouldn’t say this is an EU in decline. Rather it is an EU that is somehow confused.

Are Germans still committed to the European project? Or has the financial strain soured the country’s zeal for European unity?

Germans continue to see the EU as a vital framework because it’s an instrument to build trust among neighbors, and it continues to facilitate a level of unity in Europe that most Germans continue to appreciate. Yes, there are minorities, on the left and right, against it. But many continue to prize the opportunities, stability, and collective governance that comes with EU membership.

If you try to dissolve the currency union, you would put all of that at risk, and nobody in the mainstream really wants that. So we need to go ahead with the currency union and we need to make it work without having a political union, because Europeans don’t want to live together in a state. They prefer to live together in a union that is loosely connected.

What do you say to those critics who charge that democracy is often a casualty of European summitry?

The European Parliament is supposed to be the democratic element [in the governance of the EU], but it is not seen as central by constituents in individual countries. They don’t see it as the place where the EU gets its legitimacy. And it’s hard to argue that national parliaments are often better connected to their societies. But what we’re seeing in the EU is mostly governments dealing with each other, and these governments are democratically elected and are legitimized by democratic elections. There are many deals being negotiated in back rooms, so it’s true that the whole set up of the EU is under stress at the moment, but I don’t think that this is the biggest issue when it comes to legitimacy. The biggest issue is that things get so complicated with the eurozone and the EU. People get lost in this complexity—even actors may get lost occasionally—and often resort to the nation-state where things are much simpler.