As nuclear negotiations continue between Iran and the P5+1 (the United States, Britain, France, Russia, China, and German), expert Suzanne Maloney says “it’s almost impossible to envision” that a full deal will be reached by the November 24 deadline, but that the talks may continue. She says there has been enormous concern among U.S. allies in the Middle East, notably Saudi Arabia, about the possibility of a deal that would leave Tehran with the capability to enrich uranium. She says the Saudis have the resources to develop their own nuclear potential, perhaps with Pakistani help. This, along with Israeli concerns, could lead to increasing instability in the region. 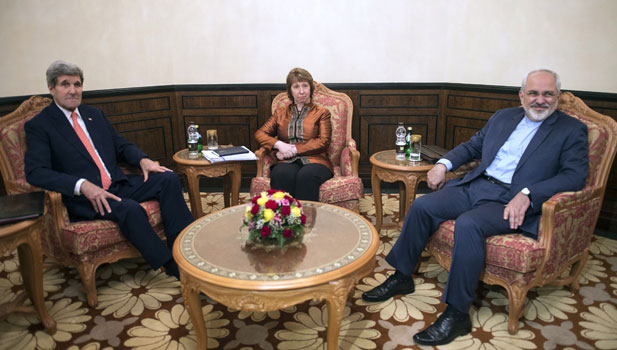 As these negotiations between Iran and P5+1 are nearing their November 24 deadline, what’s your guess on their outcome?

The only thing we can say with real certainty at this point is that it’s almost impossible to envision that a full completion of the process—that a final deal will be signed, sealed, and delivered in all its details— will come next week. It’s simply too late in the process to achieve that. Something that might be a kind of statement of principles or framework agreement that leaves open the necessity of continuing a dialogue to hammer out all the details still remains within reach and is obviously still the intent of the negotiators on all sides. The alternative would simply be an extension of the negotiation without any sort of firm justification or clear set of achievements put in place, and that would be much more politically problematic, particularly in the United States with a Republican Congress coming into office in early January that would be set to likely respond to the appearance of negotiations without any actual conclusion.

Talk about the impact that these talks have had on America’s friends in the region, particularly countries like Saudi Arabia and the other Gulf states, who have been very apprehensive about Iran’s nuclear capacities.

From the very outset of this process early last year with the conclusion of an interim accord with Iran, there was an enormous amount of trepidation among some of America’s traditional allies in the region—the Arab states of the Gulf as well as some of the other leading Sunni states in the region—about the intent of the process. Some of these allies felt left out of an ongoing dialogue that had direct implications for their own security. They’ve been quite vocal about those concerns, [which] have only intensified in recent months as a result of the emergence of a fairly urgent security crisis that invokes all of the players—the United States, Iran, and the Arab Sunni states. That is of course the threat of jihadist extremists in the form of ISIS who have taken large swaths of territory in Iraq and in Syria.

"[I]t is within the realm of possibility that the two sides simply have demands that are not mutually reconcilable."

America has launched a campaign that involves much closer coordination with traditional allies like Saudi Arabia to address the threat of ISIS, but it’s also become clear from some of the statements of senior U.S. officials and from the reports that have emerged of a private communication from President Obama to the head of the Iranian state, the Supreme Leader Ayatollah Ali Khamenei, that there is some interest on the part of the administration in leveraging opportunities to work with Iran on this crisis. And that obviously has created another wedge between the United States and some of its traditional allies in the region. [There is] great discomfort with the appearance of an American alliance with a traditional adversary both of Washington and, of course, of these Arab states.

The Saudis are leading the fight against President Bashar al-Assad in Syria, and the United States has not done much to unseat him. Is that a problem for the Saudis, who see the Iranians deeply involved in backing Assad?

Yes, this ambiguity about what America’s aims are with respect to Syria has deeply alienated many of our longstanding partners in the Arab world. [There’s a] sense of lack of a clear vision or an unwillingness, even on the part of the Obama administration, to work forcefully for the removal of Bashar al-Assad and perhaps even to suggest some degree of a common interest with the Iranians who, of course, are Assad’s most important and longest standing foreign backer. That in turn worries the Saudis and other anti-Assad nations.

Do you think the Saudis are interested in developing their own nuclear capacity?

The Saudis have made it quite clear that if a nuclear deal with Iran leaves Tehran with some residual enrichment capability and some pathway toward [developing] a nuclear weapon, then they will feel compelled to build up the same capacity within the kingdom, and obviously they have the resources to do it as well as relationships with other nuclear weapon states, including Pakistan, that would likely provide them with a relatively quick conduit to greater capability. That’s the kind of arms race in the region that nobody wants to see. It would be extremely detrimental to long-term stability and potentially disastrous in terms of environmental consequences, so there’s a great necessity to try to reassure U.S. allies that any deal that would be struck with Iranians is one that would in fact reassure [these allies], protect their interests, and avoid the need for any kind of nuclear escalation.

It’s a strange commonality of interests between the Arab states and Israel. Israel, of course, has the same view that if Iran is left with any enrichment capability, the deal is no good in their eyes, right?

There have been fairly strenuous statements on the part of the Israeli leadership since the early stage of the negotiations with the Iranians that—any deal that leaves enrichment in the hands of this regime is one that presents an unacceptable danger to Israeli security and to the existence of the Israeli state. I do think, though, that there is a diversity of opinion within the Israeli leadership, and there has been some sense of satisfaction with the constraints that have been put on Iran under the terms of the Joint Plan of Action, which is the implementation of this interim agreement.

The fact that Iran has frozen some of the most worrisome aspects of its nuclear program is relatively positive from the perspective of at least some Israeli analysts and decision makers. And so you have a sort of odd situation in which the status quo might actually be preferable to a final deal with Iran, particularly if it’s one that the Israelis perceive as overly lenient in terms of the residual nuclear capability that it permits.

If there is no deal worked out in the next week or so, what will happen?

You’ll have a set of circumstances in which [U.S.] Republicans will move very quickly to capitalize on the perception that a deal is not within reach, and if the two sides can’t arrive at some sort of statement of principles or a framework for what a final deal would look like, then it is within the realm of possibility that the two sides simply have demands that are not mutually reconcilable. The administration and its partners in the P5+1 have been very clear that they believe they’ve presented the Iranians with a formula that protects Iran’s interests, that enables Iran to retain a civil nuclear program, that serves the practical needs of that program, and is reasonable in what it imposes on the Iranians in terms of transparency and other constraints.

Have the Iranians offered a compromise?

The Iranians have not, to my knowledge, offered a compelling alternative that satisfies the basic bottom lines of the international community and have continued to insist on a fairly maximalist position [by insisting on having nineteen thousand centrifuges, whereas the P5+1 nations want to limit the number to four thousand]. A lot can happen in the final days of a dialogue and we know from prior negotiations with the Iranians that it’s not done until it’s done and there can be significant movement. But we are in a very difficult position in which the Iranians have not moved as much as expected over the course of this process and have been relatively averse to the various propositions that have been offered today.