Skip to main content
What to Expect at the U.S.-Africa Summit

Monday marks the start of the first U.S.-Africa Leaders Summit, with some fifty heads of state expected in Washington, DC, and extensive nongovernmental and private-sector events on the sidelines. The three-day summit, a year after President Barack Obama visited the continent, will begin to reverse the "feeling that the continent was being ignored or marginalized," says CFR Adjunct Senior Fellow Jendayi Frazer. The former assistant secretary of state disputes assertions that China has eclipsed the United States in African trade and diplomacy, but "people want to see President Obama more engaged," she says. 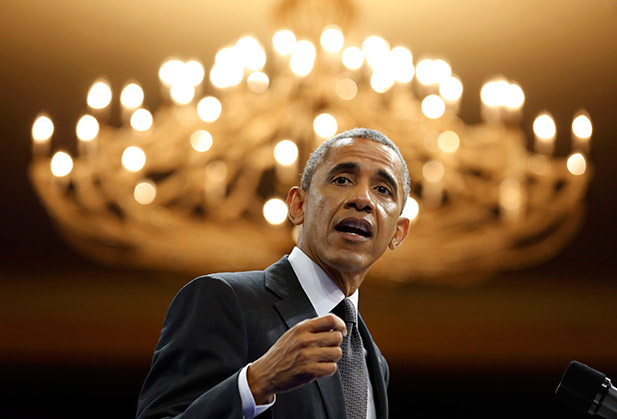 How would you place the upcoming summit in the broader context of recent U.S.-Africa policy?

A lot of chatter in the lead-up to the summit has focused on China, which has held similar summits for some time and surpassed the United States in trade with the region. What do you make of the idea that the United States is playing catch-up?

Is there a sense in African capitals that the region has been at the margins of U.S. foreign policy attention?

African leaders have felt that there hasn’t been significant attention to the continent by the administration. President Obama’s trip last summer helped to reduce that impression. This summit will go further in establishing that his administration sees Africa as an important region.

People have reacted to the time between President Obama’s first trip [in 2009] and his second trip last summer, when he did a multi-country, substantive trip with serious policy initiatives. That gap led to a feeling that the continent was being ignored or marginalized, but even during that time, America carried out diplomacy on the continent. The Obama administration continued to support peacekeeping initiatives.

You haven’t seen the signature initiatives with lots of new money behind them that you saw in the Bush administration—[AIDS initiative] PEPFAR, malaria, and debt cancellation. But with the president’s trip last summer, the announcement of the Power Africa initiative, the Young African Leaders Initiative, people feel that the focus of the administration is correct.

Rights groups say the White House has been inconsistent on promoting human rights and good governance in Africa, especially when it perceives a trade-off with U.S. national security priorities. Is that a fair?

It’s a criticism that they can make globally. But the United States is not a country that has one interest that prevails over all others other than our own national security. After that, there are various trade-offs to be made at any moment in time. To suggest that governance or human rights should be the single most important criteria for American engagement with Africa is to not be serious, from the point of view of the president’s responsibilities, or our government’s responsibilities to its citizens. I don’t think it’s a fair criticism.

AGOA is fourteen years old now, and up for renewal next year. How well has it fulfilled its original objectives?

It has succeeded, but not to the degree that we would’ve wanted. The primary objective was to increase Africa’s share of global trade. Africa was about 1 or 2 percent of global trade, and the Clinton administration talked about Africa’s integration into the global economy. Part of that was to give preferences to African producers to sell their goods in the American market, reducing tariff barriers so that their goods would be easier to come in and would be more competitive.

We found that there were all types of non-tariff barriers to African goods: phytosanitary barriers, branding and packaging barriers, know-how barriers. The Bush administration made new efforts to make AGOA more effective. Those efforts have continued through the Obama administration. But the legislation needs to be renewed regularly, and investors like to put their money in places where they know there’s going to be a long-term horizon. That leads to the debate about whether AGOA should be permanent or not.

The argument is partly dealing with the question of to what degree are you supporting foreign companies exporting into America. But Africa’s such a small percentage of America’s trade that it doesn’t affect America’s workers. One could argue that it’s better to grow African economies through trade rather than them remaining in an emergency or fragile condition and we have to put in a lot of aid.

To turn to the summit’s security agenda, what’s your take on trends in regional conflict management and the U.S. role there?

Over the last ten years the security environment has been much better, in terms of civil wars and regional wars. But there’s been a deterioration on the terrorism front, particularly with groups like Boko Haram coming up, the aftermath of the fall of Libya, and the spread of terrorism across the Sahel.

Governance is part of the problem everywhere, particularly when you’re talking about huge vast areas of land and the need to have border security and government services extending throughout the territory of many of these countries. That’s not a criticism of any particular government. After 9/11, we found out that our agencies were not well coordinated, and there had to be institutional reforms to be able to better address the terror threat. The same is true across Africa.

We’ve done a relatively good job in Somalia, in terms of support for the AMISOM peacekeeping force. We need to do a better job supporting our allies, particularly Kenya, which is taking the brunt of the attacks from al-Shabab because of the AMISOM force. It would be a huge problem if President Obama in his final years does not visit Kenya. The Kenyan people would feel that it was a major insult that President Obama would not visit the home of his father and of his relatives as president of the United States.

Similarly, Nigeria is a country that has always been aligned with us on global affairs, and it has Africa’s largest economy and population. For President Obama not to visit Nigeria would be as if the American president did not visit the United Kingdom.

With the president, there’s been this emphasis on engaging [only] good governments, safe governments, as if any government is one hundred percent good or one hundred percent bad. It would be helpful if [the administration] became a bit more strategic, just like we are everywhere else in the world. This is a global issue. People want to see President Obama more engaged.

The private sector is playing a large role in the summit, which emphasizes foreign direct investment. The Power Africa initiative is supposed to encourage U.S. energy companies in the continent. Is it unique for the private sector to be playing such a prominent role in a summit?

The Obama administration has done a fantastic job encouraging events around the summit. One of those significant events will be the U.S.-Africa Business Forum, which is being hosted by Bloomberg Philanthropies and the U.S. Department of Commerce. The people who work on Africa are excited about the encouragement of the business community and business relations. NGOs and businesses have been fully engaged in Africa, even while people are saying China’s starting to eclipse American official engagement. It’s good for the administration to focus on the Power Africa initiative, but it’s not the reason our energy companies are on the continent; they’ve been there.

There are reports that Liberia and Sierra Leone’s presidents both pulled out of the summit to manage the Ebola crises at home. Will the outbreak overshadow the summit?

I hope it helps focus attention on health issues. There’s a spousal program that’s hosted by First Lady Michelle Obama and former First Lady Laura Bush and the Bush Institute that’s going to have a significant focus on health initiatives. It speaks to these questions of capacity.

The U.S. private sector may also have a role to play. I would hope that the administration would not only reach out to the Centers for Disease Control, but also look to our medical companies that can contribute equipment and expertise to set up emergency hospitals.

What outcomes will mark a successful summit?

The biggest outcome is the event itself, which puts the focus on Africa and concentrates the attention of those within the administration, and hopefully within the American public, about the importance of Africa. It’s not just peace and security, but also economic growth and development, democracy and governance, and other issues like health that the Ebola crisis is actually bringing to the fore. The biggest and the most important point of this summit is the attention given to Africa. Secondly, I hope it will create a renewed commitment within the Obama administration for the president to actually more actively engage with the leadership of the continent.