Skip to main content
What MH17 Means for Russia

The downing of Malaysian Airlines Flight 17 last week, apparently by Ukrainian separatists, has left Russian president Vladimir Putin "in a fix," says CFR’s Stephen Sestanovich. He cautions that the focus of the European and U.S. response should go beyond the passenger jet downing and address broader concerns about Russia’s policies toward Ukraine. As for Tuesday’s decision on the part of European Union foreign ministers to hold off on imposing an arms embargo, Sestanovich says, "over many months, Putin has adroitly managed to keep the EU from imposing severe sanctions. If he can do so again, in the most important phase of the Ukraine crisis, it will be a devastating blow to the organization." 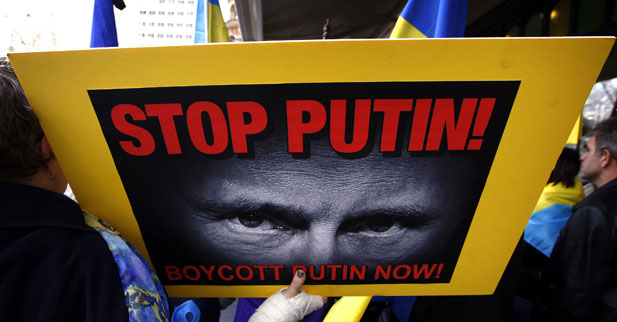 [President Putin finds himself] in a fix. I don’t think Russian leaders, policy makers, and diplomats have had such a bad brief to argue in decades—maybe not in half a century. The Russian response to this event has been stiff-necked resistance to the inevitable followed by back peddling. It’s been hard for them to keep up with events, but they have got to acknowledge what is obvious to everyone: their guys were responsible for the downing of the jet and they used Russian equipment to do so.

Why is this so damaging for Putin?

This is not just a case of of somewhat confused and trigger-happy military people shooting down an airliner that they thought was a military target. The really awkward part of this for Putin is that he was caught red-handed, stoking a civil war in another country.

Why were the pro-Russia rebels given anti-aircraft weapons?

The separatists have been on the defensive against an energized and more confident Ukrainian government and military. The past couple of months have not been good ones for them, beginning with the election of Petro Poroshenko in a strong first ballot mandate to unify the country. The Russians and their allies have seen their support within Donetsk and Luhansk dwindle, they’ve seen the Ukrainian military gaining ground against them, and they’ve had to abandon one of their most important strongholds, Sloviansk. The Russians had a choice at that point to slowly disengage and let this insurgency peter out or back them up: they chose to back them up.

At the time Putin seized Crimea, many were forecasting that a new, energized Russia was going to try to recapture some of the grandeur of the Soviet Union. But what’s happening now?

Well, that was a moment where Putin seemed to have a free path in asserting Russian power. He’d managed to take Crimea without firing a shot. People were outraged but it was unclear what kind of energy and unity the West would be able to bring in responding, and, sure enough, there was not a particularly strong response. The strategic error that Putin made was assuming that the weak response to Crimea could be sustained if he kept on track in eastern Ukraine. And the catastrophic miscalculation he made was to think that he could keep adding to the military capabilities of these insurgents, even as they were faltering, without having to pay a price.

The West must contend with the nature of Russian policies regarding Ukraine and Putin’s apparent commitment to sustaining an insurgency against Kiev. It’s kind of amazing that even today in Moscow, people still refer to the government in Kiev as a "junta"—continuing attempts to delegitimize the Ukrainian government. And that’s going to be a harder concession for Putin to make [than cooperating with the crash investigation]: to accept that his interference in Ukraine and the stoking of civil war must stop. We don’t yet know if he is prepared for that.

Does Tuesday’s decision on the part of EU foreign ministers to hold off on imposing an arms embargo against Russia reflect a lack of political will on the part of European leaders to confront Putin decisively?

Over many months, Putin has adroitly managed to keep the EU from imposing severe sanctions. If he can do so again, in the most important phase of the Ukraine crisis, it will be a devastating blow to the organization. It’s almost too much to imagine that the EU’s foreign ministers will really decide to do nothing at all. So at their next meeting, they will probably announce at least a few minor measures. But if that’s it, the damage to Europe’s influence and effectiveness will be immense. Putin’s contempt, already great, will know no bounds.

What is the challenge for Russia now?

"The strategic error that Putin made was assuming that the weak response to Crimea could be sustained if he kept on track in eastern Ukraine."

The challenge for Russia is to find a formula in which its influence in Ukraine can be exercised in a way that is considered legitimate by other governments. All in all, people don’t regard Russia’s energy leverage over Ukraine as flat-out illegitimate. It’s understood that Russia is an energy power, so it’s going to be able to drive a hard bargain with Ukraine—but there is a difference between driving a hard bargain and trying to dismember the country. And that’s a leap that the Russian leadership has probably been thinking about for some time now because their policy in Ukraine has been very successful.

This past weekend, Australia threatened to disinvite Russia from the G20 meeting in November. What would be the potential significance of such a gesture?

It surely tells Putin that the isolation that he has brought on himself can go a lot further than it has so far. Is it sustainable to have a G19 over the long-term, excluding Russia? Probably not. Putin can probably get back [into the G20] just through the passage of time and through cooperation on some of the narrower issues involving the crash. But the G7 is another matter. It’s going to be difficult for the G7 to find a way to reinvite Putin—to reconstitute the G8. It may be that some of the costs of Putin’s policies will actually be irreversible.