With the Syriza party’s decisive victory in Greece’s snap elections on Sunday, Alexis Tsipras won his second term as prime minister less than a year after he first took office. Eleni Panagiotarea, research fellow at the Athens-based ELIAMEP think tank, says that while these results may restore a measure of political stability, they will do little to alter the country’s dire economic straits or the terms of the third bailout agreement. Complicating the country’s fragile fiscal situation is the escalating migrant crisis unfurling on Greece’s shores. "Greece does not need to battle a full-blown refugee crisis, while fighting a lost war—which is what the third bailout program will amount to if Greece’s creditors don’t do their part [to ensure debt sustainability]," she says. 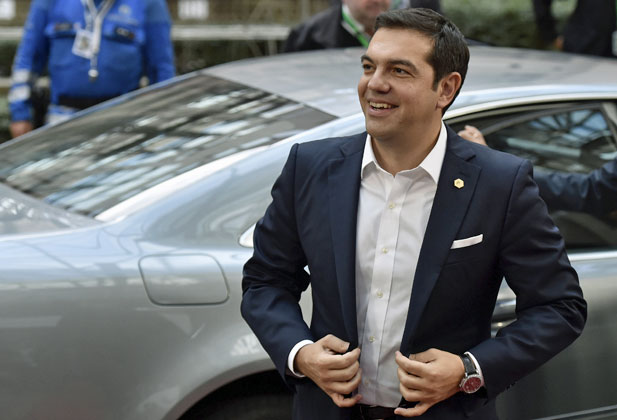 Alexis Tsipras and his Syriza party secured a surprisingly decisive victory on Sunday. How do you explain this electoral success after Tsipras’ U-turn on austerity this summer?

Tsipras talks and the Greek people listen. They trusted him back in January to tear up the bailout programs and they trust him now to implement the harshest program that the country has seen. Interestingly, there seems to be an inverse relationship: the less trust that is placed in him from abroad, the more trust he enjoys at home. Let’s not underestimate the record level of abstention, however. The 43 percent [abstention rate] is a major oxi [or "no"] to the Greek political system.

Is it fair to still characterize Syriza as an anti-austerity party, or has it morphed into something else?

The anti-austerity platform served Syriza well. It kept a set of disparate factions, with uncoordinated ideologies and aspirations, together. Following the secession of its more radical elements, it is now moving—guilt-free—to the center-left.  This is a strategic shift that will enable the party to consolidate power.

Will this election result change the terms of the third bailout agreement? Does this latest electoral victory give Tsipras more leverage with European leaders and policymakers in Brussels, Berlin, and Frankfurt to press for debt restructuring?

There is no better deal on offer. This was and remains a take-it-or-leave-it agreement. It also repeats a lot of the design failures of the past:  overly optimistic projections, unrealistic targets and no credible plan for growth. Tsipras says he remains committed to protecting the vulnerable and stabilizing the economy, but the flexibility accorded in previous implementation drives, when reforms could be adopted à la cart and "equivalent measures" were de facto accepted, will be in very short supply.  Strict conditionality is the price to be paid for the seven months of Beckettian brinkmanship and depletion of credibility and trust—the price to be paid, in fact, for the entire stock of implementation failures from the first and second bailout programs.

Tsipras has become "the devil you know." Markets and investors bet on him to guarantee political stability and oversee the return to economic normalcy that the country desperately needs. It seems that European leaders and policymakers also subscribe to this view: it is better to work with a converted Tsipras, who still has "the people on his side." Debt restructuring, however, will not come easy. Creditors are concerned that automatic debt relief will trigger moral hazard and a slowing down of reforms. They are, to an extent, shortsighted: the longer debt sustainability is swept under the rug, the less likely [it is that] Greece will experience a meaningful recovery.

Will the IMF participate in this bailout?

Debt relief is, in fact, a precondition for IMF participation in the third bailout. The IMF played the eurozone political game long enough. It is no longer willing to do so. Demanding debt sustainability, on the other hand, is the IMF’s best chance to gain back some of the credibility lost over two failed bailout programs. Signing off, we can assume, will require both a European scheme that meets medium-term sustainability and Greece enacting tough economic reforms.

What are the prospects for the Greek economy? Has it passed the point of crisis? Or do you expect to see "Grexit" back in the headlines again in a few months’ time?

The severe policy slippages of the first half of 2015, the imposition of capital controls at the end of June, and the deteriorating liquidity conditions in the real economy do not give much hope for economic growth in 2015. At least, some measure of political stability will now be hopefully restored and the reform momentum renewed. The recovery of investment and the return of business confidence, both critical for overcoming the current malaise, will depend on stepping up the pace of structural adjustment and ensuring better access to credit. Recapitalizing the banking system and addressing the high level of non-performing loans are a sine qua non for restoring liquidity and enabling the removal of restrictions on capital movements. The to-do list is long, while the debt burden remains high, and faith that the front-loaded reforms will protect the most vulnerable is low. Can Tsipras produce a more equitable distribution of the costs and benefits of this latest and harshest round of adjustments?

“The longer debt sustainability is swept under the rug, the less likely [it is that] Greece will experience a meaningful recovery.”

As the latest episode of the Greek crisis has shown, “Grexit” is ultimately about politics, not economics. If Greece’s partners want to keep Greece in the eurozone, they will. At the same time, it would be foolish for Tsipras to assume that he still has a free pass. Eurozone membership and continued access to funding, he should know by now, comes with responsibility.

Does Tsipras have the political skill and support to pass a series of tough measures—pension reforms, tax increases, and further privatization—by the EU-imposed October deadline?

Tsipras’ best bet will be to leaven the tough measures with talk of protecting the vulnerable, restoring "dignity," and "redistributing" from the rich to those in need. Program ownership, however, will take time; it will still be sprinkled with political risks that Tsipras may not be willing to take to the bitter end. After all, the program envisages a long, three-year implementation period. The October deadline, however, is more than likely to be met: conditionality has so far worked in this program.

Earlier this year, Syriza promised comprehensive asylum and immigration reforms. Do you think this remains a priority for the new Tsipras administration? How does the migrant crisis complicate this country’s fragile fiscal condition?

It is no accident that, upon taking the oath of office, Tsipras declared that Greece was a first reception country and that Europe had unfortunately not taken steps to protect reception countries from a migration wave which has taken on uncontrolled dimensions. Tsipras’ message is quite clear: This is a European problem, and responsibility must be shared among all member states.

Numbers are difficult to come by and it is rather early to calculate the effects of an unprecedented influx of migrants and refugees on the fiscal front. However, unless there is substantial burden sharing at the European level, the refugee crisis in Greece could trigger a set of unpleasant events, not least a further ascent of the fascist Golden Dawn.

Germany has emerged as a leading voice for asylum and immigration reform across Europe. Do you think Greece’s frontline role in the migrant crisis will change the political calculus for debt relief?

“Greece does not need to battle a full-blown refugee crisis, while fighting a lost war—which is what the third bailout program will amount to if Greece’s creditors don’t do their part [to ensure debt sustainability].”

Germany will be very careful to grant debt relief on that basis. For starters, this may whet the appetite of other recipient countries: they may choose to link domestic crises they are battling with some sort of financial aid. A goodwill gesture on the part of Greece’s biggest creditor could also be interpreted as an invitation to soften resolve on the domestic policy front rather than strengthen it. At the same time, debt relief should come sooner rather than later. Greece does not need to battle a full-blown refugee crisis, while fighting a lost war—which is what the third bailout program will amount to if Greece’s creditors don’t do their part [to ensure debt sustainability].