Skip to main content
Where Is Putin Leading Russia?

Russian President Vladimir Putin’s annual state of the nation address on December 4 failed to answer many questions about his intentions in Ukraine and his plan for dealing with Russia’s economic estrangement from Western states, says CFR’s Stephen Sestanovich. “It was a very eclectic, even incoherent, speech,” Sestanovich says. “There was a certain evasion on his part to some of the big economic problems that the country faces.” While Putin has not acted as aggressively in Ukraine as some Russian nationalists wish, Sestanovich says, he has continued to take measures in support of pro-Russian separatists while not pursuing compromise that could end the crisis over Ukraine. 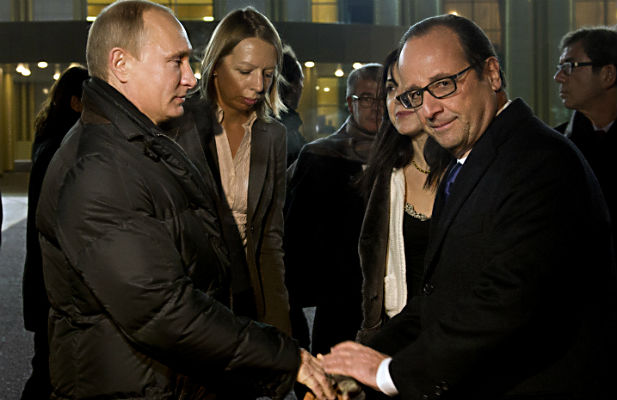 What was your impression of President Vladimir Putin’s annual speech to the Federal Assembly last week?

There was more-than-ordinary anticipation of this speech because of the timing. It came as oil prices were crashing, as the ruble was crashing, and as anxiety about the future of the Russian economy was mounting. The questions that people here and in Russia were asking before the speech were "Are we going to see a more authoritarian Putin, one pushing state solutions, or are we going to see a new, liberal incarnation?" People asked whether he was going to be more belligerent than ever, or if he would be suggesting an interest in conciliation.

What did you conclude?

My reaction, having read the speech a couple of times, was all of the above. It was a very eclectic, even incoherent, speech. A lot of the reviews were extremely negative. Russian media commentary played up some of the uneasiness that Putin seemed to reveal. There was a certain evasion on his part to some of the big economic problems that the country faces.

He talked a lot about taxes and making things easier for businesses. Was that an effort to improve the economy, or was it just a political gesture?

If Prime Minister Dmitri Medvedev [who had served one term as president] had given that speech, we would all have leapt on the phrases that suggested a liberal reformist breakthrough. There was the passage where [Putin] said “it’s important to abandon the basic principles of total endless control,” in suggesting that the state bureaucracy is out of hand. And there are other measures that had a kind of liberal flavor to them. At the same time, the overall posture of the speech was one of directing solutions, insisting by decree that problems be addressed. It was very much, an ex-cathedra statement of where the country has to go.

On foreign policy, it wasn’t as harsh an anti-American attack as I expected. Do you agree?

There was a lot of pugnacious anti-American rhetoric: complaining again about the U.S. pullout from the ABM treaty [the United States withdrew from the 1972 treaty in 2002], talking about support from abroad for terrorism in Russia, behind-the-scenes manipulation of events inside Russia and inside Ukraine. The first passages of the speech are pretty relentless in saying that Russia has to stick it to the Americans. At the same time, Putin says, “We don’t want to add to our list of enemies; we want to have as many partners as we can in the world, we need foreign investment, we need more exports, we need integration into the world economy.” There are even a few semi-conciliatory comments about Ukraine. Much of the speech has a kind of incoherent tone, but he didn’t give a lot of ground on the anti-Americanism front.

What does Putin want on Ukraine? He’s been hedging all year.

He has been hedging, and there are people who say he faces criticism at home for not having gone further. The nationalist fervor that Putin has stirred up does create some expectations that he has to deal with. [Perhaps] he has taken no more of Ukraine than he has because he’s cautious. Nevertheless he has not pursued compromise, and has time and again disappointed European and American interlocutors who were hoping to see some signs of restraint and a readiness to extricate himself.

Do you believe that he really feels that if NATO had not expanded eastward after the collapse of the Soviet Union there wouldn’t be this crisis?

What Putin thinks is always hard to say, [but] he has repeatedly claimed that the West is trying to weaken Russia. The charge came up in this latest speech. He says [the U.S. approach to Russia] is still a Cold War policy, and that Russia has to stand up to that kind of encroachment. That’s the Putin of this year. The Putin of the past couple of years has been far more preoccupied with internal subversion. As he sees it, Western support given to nongovernmental organizations is subversive. He hadn’t talked a lot about NATO enlargement [before].

I don’t doubt that a lot of Russian policymakers and strategists have seen the enlargement of NATO as a setback, something less than optimal. Did it drive Putin to invade Ukraine? I’m skeptical of that. What drove Putin to invade Ukraine was the fact that he had completely blown it in trying to bring Ukraine into Russia’s economic sphere. He lost any influence over the Ukrainian government by pushing former President Victor Yanukovych to a bloody crackdown that obliged him to flee the country.

The West’s relations with Kiev are kind of ambiguous. The European Union, the United States, and NATO support Ukraine, but together haven’t done much to help Kiev. Do you agree?

[Ukraine’s] economy is worsening, that’s for sure. The EU and the United States have been pretty strong supporters of Ukraine in a number of ways, organizing an IMF package for Ukraine and signing the association agreement, which promises Ukraine a closer relationship with the EU. But there’s great weariness, in European capitals and in Washington, of Ukraine’s ability to get its act together and push through the kind of reform measures that would be necessary to put the economy on a stable foundation.

So what has to be done to stabilize Ukraine?

A lot of measures have to be taken by [Ukraine’s] new government. The new cabinet just came to office, six weeks after parliamentary elections, and [there is no] clear consensus what kind of measures it’s going to take up. The IMF program that was adopted earlier this year is clearly not going to be enough to get Ukrainians through the year and beyond, and will probably have to be repackaged and enhanced to prevent a complete [economic] meltdown.

The United States, of course, has its attention elsewhere beyond Ukraine right now.

There’s no shortage of crises preoccupying the Obama administration’s foreign policy team. But they are aware of the importance of the Ukraine problem. That’s why Vice President [Joseph] Biden was just in Kiev, and that’s why this issue comes up so frequently in meetings between the secretary of state [John Kerry] and the Russian foreign minister [Sergei Lavrov]. There is an ongoing discussion in most of the key U.S. government agencies about next steps with Ukraine, whether it’s at the Treasury in trying to figure out what the next steps of the IMF are going to be, or at the Pentagon, where they’re wrestling with the issue of enhanced support for Ukraine’s defense.

Right now a lot of people are worried about a new offensive, supported by Russian men and material, which seems to have been crossing the border in the past few weeks. If a new offensive breaks beyond the current borders and completely sweeps aside the Minsk agreement of September 5, it will be a sign to Western governments that you just can’t do business with Putin on this issue and have any confidence in anything that he says. That would lead to a severe breakdown of trust in Putin, which may be one of the most significant consequences of this entire crisis. What European governments are prepared to believe commitments from him about a future respect for Ukrainian sovereignty and territorial integrity?

French president Francois Hollande just met with Putin, and he seemed satisfied that they’ll have more talks on Ukraine. Where might that lead?

One of the most important issues between Hollande and Putin wasn’t even discussed, and that is whether France is prepared to hold back on delivering the Mistral warships to the Russians, even with significant contractual penalties involved. That Hollande is holding back suggests how weary major Western leaders are at this point against doing anything that makes them look like dupes of Putin. Does Hollande want to deliver these warships [the day before] Russian forces launch a new offensive in Eastern Ukraine? Of course not.