French president François Hollande’s recent two-day state visit to Washington was intended as a "shot in the arm" for the beleaguered French leader as well as an acknowledgment of strengthening ties, says CFR’s Europe expert Charles A. Kupchan. Kupchan says that France has emerged as the United States’ strongest European security partner, supporting U.S. policy toward Syria and Iran and taking firm military action on its own against militants in Mali. The visit is also a sign that the White House is pivoting toward a more engaged foreign policy after months of domestic focus, Kupchan says. 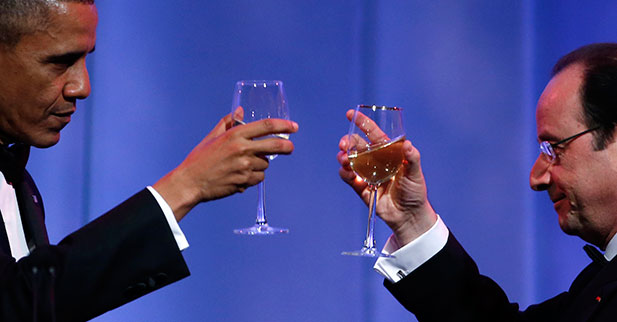 Why did President Obama invite President Hollande? Obama hasn’t had many state visitors during his two terms in office.

"France has emerged as America’s most activist and steady partner in Europe when it comes to security issues."

From Obama’s perspective, there were three primary objectives. The first is that France has emerged as America’s most activist and steady partner in Europe when it comes to security issues. That’s in part because the British have been distancing themselves from the European Union, partly as a reaction to the conflict in Afghanistan and partly because of domestic politics in Britain. They are not out in front on the projection of power in the same way that they used to be. France, on the other hand, under the previous president Sarkozy, took the lead in organizing the intervention in Libya. And since Hollande has been in office, he stood by Obama in responding to the use of chemical weapons in Syria with the threat of force. French aircraft were on the tarmac ready to go when Obama decided to instead take a diplomatic approach to getting rid of Syria’s chemical weapons.

And hasn’t France been tougher on Iran in the negotiations than the United States?

Yes. Under Hollande, France has actually been tougher than Washington on Iran. During the negotiations, France made certain demands that went beyond where the other members of the P5+1 [the United States, Britain, France, Russia, China and Germany] were. Hollande orchestrated a French intervention in Mali, which proved relatively successful in defeating Islamist extremists in the northern part of the country. In general, France has been playing an important role, so I think Obama wanted to say: We appreciate all that you are doing in terms of shouldering international responsibilities; we see this as a continuation in the alliance that dates back to the American Revolutionary War, when only through French help did the United States succeed in separating from Britain.

The second objective is to give Hollande a shot in the arm. Hollande has been suffering from some of the lowest popularity ratings on record. He has not gotten off to a good start. He’s seen as somewhat indecisive, and hasn’t been providing strong leadership at home. And over the last few weeks, he has been engulfed in a scandal over his romantic life. It’s important for the United States to do what it can to strengthen Hollande, because he is taking on a very important task. That is, he’s trying to pull France’s socialist party, the center-left, toward the center. He’s trying to build support for a more business-friendly approach to the economy. And that means bringing down some taxes, liberalizing the labor market. He’s also attempted to cut public spending, which is very important because of the outsized nature of the French state. These changes are critical to getting France back on its feet economically, which is part and parcel of getting Europe back on its feet, economically and politically. So the stakes are high.

Finally, I think the visit was in part about trying to repair some of the damage to transatlantic relations that’s been done by the NSA spy scandal.

How significant have the Edward Snowden revelations been to tensions in the alliance?

In the United States, we tend to underestimate how much anger and distrust it’s caused on the other side of the Atlantic—most acutely in Germany, but elsewhere [too]. Hollande did say yesterday that trust has been restored, at least for him. It’s a step forward in trying to put this issue behind Obama.

German Chancellor Angela Merkel keeps coming back to that, doesn’t she?

She does. That’s because it is a continuing topic of debate. Snowden and [journalist] Glenn Greenwald and others have taken an approach to the release of information that ensures the continuing focus of the media on the issue. It trickles out, week by week. And every time there’s a new disclosure, you have a new wave of outrage. It’s particularly sensitive in Germany because of German history and Merkel’s own experience of growing up under East German Communist rule.

After his visit to the White House, Hollande went to Silicon Valley, apparently to publicize the need for modernizing France’s economy and to bring higher tech to France. Does that have reverberations in France?

It’s not unusual for foreign leaders to make a stop in Silicon Valley and deepen ties between their own high-tech business community and those in the United States to get more cross-border investment. It’s also part of the effort to put more emphasis on the economic side of transatlantic relations. One of the issues that is a high priority for President Obama and the Europeans is the conclusion of the Transatlantic Trade and Investment Partnership, a trade deal that would create a free-trade area by removing regulations and trying to bring down non-tariff barriers.

Where do negotiations stand on this trade deal?

It’s very much a work in progress. There are conversations going forward both in the United States and in Europe and between the two parties. Many trade deals focus on the reduction of tariffs, but in the case of U.S.-EU. trade, most tariffs are already quite low. So this deal is focusing more on joint regulations and standards: harmonizing drug testing or at least mutually recognizing the other side’s standards when it comes to drugs or chemicals and these sorts of things. It’s a complicated conversation made even more complicated by the fact that [Senate Democratic leader] Harry Reid recently said that he is not interested in giving the president fast-track negotiation authority. That raises troubling questions about whether the deal would be able to pass if it were to be concluded. It’s an important step because it would increase growth and create jobs on both sides of the Atlantic. And the first, second and third priorities for Obama and his European counterparts today are jobs, jobs and jobs.

They have very sticky unemployment, a pretty rigid labor market. European leaders, particularly Hollande, are looking for anything they can to push up growth and employment.

President Obama seems to be moving toward a more activist phase in foreign policy."

Obama is going to be in Europe quite a bit later this year.

Several trips to Europe are scheduled. On March 24-25, President Obama will be going to the Netherlands for a nuclear nonproliferation summit. He will be going to Brussels for a U.S.-E.U summit on March 26 and he will also be making a stop in Italy at that time, including a visit to Pope Francis. In June, there is a G8 summit scheduled for Sochi on June 4 and 5. And on September 4 and 5, there is a NATO summit scheduled for South Wales.

Obama also announced he was going to France for the seventieth anniversary of D-Day on June 6, accepting an invitation from Hollande.

Yes. It’s possible that that may correspond to the G8 trip. In general, President Obama seems to be moving toward a more activist phase in foreign policy. Since reelection he’s been focused like a laser on domestic issues, particularly health care and the question of growth and inequality. Now he seems to be returning to a more balanced portfolio of domestic and foreign items.

Blog Post by John Campbell May 15, 2019 Africa in Transition

The G-7 Gathers in Biarritz for a Dysfunctional Family Reunion