When Iranians elect a new parliament and Assembly of Experts on Feb. 26, they will find their choices circumscribed: nearly all the reformist candidates and many pragmatists were disqualified. “The elections are not free and fair,” but even so they are important indicators of trends among powerful factions, says Mohammad Ayatollahi Tabaar, a scholar of Iranian politics at Texas A&M University. Reformist leaders, he says, are urging Iranian voters to come out to block the most hard-line candidates. Supreme Leader Ali Khameini, too, is urging high turnout to demonstrate that “despite all the factional rivalries in Iran, the regime as a whole has popular legitimacy,” Tabaar says. 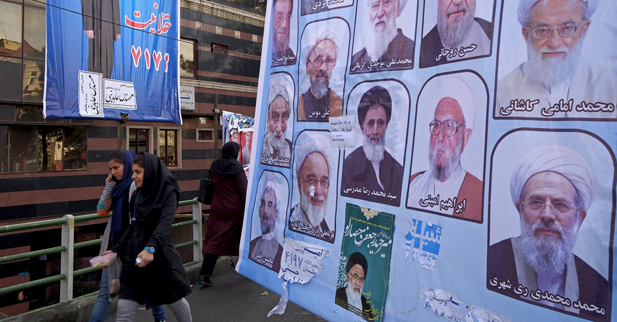 What is the prevailing mood among voters?

Polls in Iran tend to be unreliable and elections are unpredictable. Even the supreme leader, with all the means that he has to control the process, cannot always predict the outcome. The elections are not free and fair, but despite all the constraints there are ways for the reformists, pragmatists, and even those who don’t believe in the nature of the system to outmaneuver the establishment. The conservative leadership is worried about what it calls “Western infiltration” of the election.

The official website of the supreme leader, Ayatollah Ali Khamenei, has published his election-related ordinances and fatwas declaring voting a religious obligation and asserting that women do not need to get their husbands’ permission to participate in the election. He has even asked those who don’t believe in the Islamic Republic to vote, because according to him, at least the government provides security. He first made this appeal for turnout in 2013; it had been unprecedented. He is essentially saying: “compare us to Iraq, Syria, Libya, Yemen. If you don’t vote, and we’re undermined, the regime could disintegrate the way those countries have.”

"Despite all the constraints there are ways for the reformists, pragmatists, and even those who don’t believe in the nature of the system to outmaneuver the establishment."

There is a sense of desperation in this appeal. He bitterly remembers what happened in Iran during the Green Movement, in 2009, and he has seen what happened in the Arab world during the Arab uprisings. He wants to show the Americans and his increasingly aggressive Saudi rivals that despite all the factional rivalries in Iran, the regime as a whole has popular legitimacy.

Implementation of the nuclear agreement, known as the Joint Comprehensive Plan of Action, or JCPOA, went into effect last month, but it seems the economic revitalization President Hassan Rouhani had promised will be a long time coming. Can these elections be seen as a referendum on the president?

This election will be an indication of how Rouhani, [considered a pragmatist], has managed to capitalize on his nuclear success and translate that into popular support to have a less antagonistic Majlis and Assembly of Experts. His economic policies have not been very effective, but many people prefer [the current economic situation]  to the alternative they have seen—what happened under Ahmadinejad for eight years, when the economy was in shambles despite unparalleled petrodollars.

The conservatives’ strategy is to emphasize that Rouhani has failed in his economic policy, and also that even the nuclear deal was not as successful as Rouhani says. The conservatives constantly stress that the U.S. Congress is gearing up to reimpose the old sanctions under new names.

What role does the Majlis play in terms of checks and balances in the Iranian political system?

If there is a Majlis less antagonistic toward Rouhani, it could be an ally in his conflicts with the Revolutionary Guard [IRGC], the Guardian Council, or the IRIB, the state-controlled television. That would allow him to move his agenda forward. I think his ultimate goal is to reestablish relations with the U.S.

"[The reformists’] minimum objective is a less conservative Majlis and Assembly of Experts. That seems to be good enough for them for now."

We should keep in mind that he himself is a potential candidate to be the next supreme leader. After all, [then-] President Khamenei was elevated to the office of supreme leader in 1989, after the founding father of the Islamic Republic, Ayatollah Khomeini, died. Rouhani is running for a seat in the Assembly of Experts election. The vote will be a test of his popularity three years into his presidency, and could affect the internal dynamics of the Assembly of Experts, as well as backroom dealings when Khamenei dies—the supreme leader is seventy-six and rumored to have prostate cancer.

Will Rouhani press for major domestic shifts if he gets that internal boost?

Figures like Rouhani and former presidents Akbar Hashemi Rafsanjani and Mohammad Khatami, are pushing for a set of internal policy compromises they call “JCPOA 2.0.” They argue that although Iran has made painful concessions on the nuclear program, the deal will pave the way for the country to rejoin the international community. They would like the model that led to a compromise on the nuclear issue externally to now lead to internal changes to bring about a factional reconciliation through a relatively free and fair election.

Rouhani recently made a surprising statement that the reformists, with “ten million supporters,” cannot permanently be banned. It doesn’t mean Rouhani is a reformist; he’s a centrist/pragmatist national security figure who has benefited from having the reformists out of the game. But he’s now arguing to the conservatives that it’s in the regime’s overall interest to come to a compromise with reformists. So far Ayatollah Khameini has been adamantly against this.

The Guardian Council disqualified thousands of candidates for the Majlis, so reformists are reportedly flooding the zones, thinking it can’t disqualify every single one.

That was their initial strategy. According to the reformists, the Guardian Council disqualified 99 percent of the reformist candidates. Many pragmatists couldn’t get through either.

There’s concern that the turnout among reformist voters could be low. This is often the case for the Majlis elections. Additionally, many people may decide not to vote because they don’t want to legitimize the regime. We saw this kind of a boycott in 2005; that, together with the usual irregularities, is how Ahmadinejad became president.

Iranian reformists, including Khatami, are pleading for people to vote. Their goal is not necessarily to get in fellow reformists, but to block the ultra conservatives. Their minimum objective is a less conservative Majlis and Assembly of Experts. That seems to be good enough for them for now.

Khamenei is aging and there are persistent rumors of his ill health. What are the stakes in electing a new Assembly of Experts?

It is important to observe how key candidates in the two camps perform—mainly former President Rafsanjani and current President Rouhani, on the pragmatist side, and Ayatollahs Jannati, Yazdi, and Mesbah on the hard-line conservative side. Given all the constraints and possible irregularities, if Rafsanjani and Rouhani surpass their rivals, that will undermine the supreme leader and his influence among the elites. The Assembly of Experts election is less competitive than the Majlis. In some districts there’s only one candidate. But it may be the most competitive elections in the history of Assembly, which was founded after the 1979 revolution. There has never been such vicious calls to target the old guards. It will have symbolic weight.

"If Rafsanjani and Rouhani surpass their rivals, that will undermine the supreme leader and his influence among the elites."

Factions are fluid in Iran. Nominally, they range from ultraconservatives to conservatives, pragmatists, and reformists. But political actors move around. A hardline conservative today can find him- or herself a moderate conservative in a couple of years, eventually a pragmatist. The supreme leader is furious that in the past five years, especially during the Ahmadinejad presidency, many of his conservative allies moved away from him. One of them is Ali Larijani, the Majlis speaker. He was a hard-line opponent of the nuclear negotiations, under the reformists. Later, he himself led the negotiations, under President Ahmadinejad. Larijani eventually resigned after clashing with Ahmadinejad and moving toward the center. Khamenei is not happy that many of these moderate conservatives have allied with Rouhani, if not publicly at least quietly. If Rouhani and Rafsanjani get a lot of votes, that will signal to many other members that they should rethink their conservative agenda.

On paper, the Assembly is a check on the supreme leader’s power. Does the body exercise this authority in practice?

No. Recently some figures have tried to put this issue into the debate. But these voices were silenced after Ayatollah Sadeq Larijani, the head of the judiciary and himself a potential next supreme leader, called this “unconstitutional.”

Rafsanjani has recently promoted the idea of having a leadership council instead of one supreme leader. His goal seems to be to undermine this office. It’s ironic, because Rafsanjani was instrumental in creating this system back in 1979. What is astonishing is that he is losing access to power more and more—he and his family are attacked left and right—yet he still carries substantial weight within the clerical establishment, the IRGC, and even society at large.

When Rafsanjani announced his intention to run for president back in 2013, the Guardian Council felt forced to disqualify him, which was embarrassing for the regime; the possibility of him winning could have been even more embarrassing for Khamenei. Rafsanjani’s disqualification helped mobilize people to vote for his protégé, Hassan Rouhani, particularly after the reformists joined his coalition. This time Rafsanjani pushed Hassan Khomeini to announce his candidacy, perhaps only for him to be barred from running. Rafsanjani is shrewdly increasing the costs to the regime of disqualifying these well-known figures. He seeks to polarize the elections to bring moderate conservatives as well as swing voters on board. His strategy worked in 2013. We will see if he succeeds on February 26 as well.