Turkish voters will elect a new government on Sunday. After twelve years in power, the Justice and Development Party (AKP) is not in danger of losing its majority, but President Recep Tayyip Erdogan’s consolidation of power, economic slowdown, and regional crises have energized a new opposition. For the first time, the pro-Kurdish People’s Democratic Party (HDP) could temper the AKP’s ambitions, chief among them its aim to endow the presidency, a largely ceremonial post, with executive powers. “The presidential system Erdogan has in mind has no checks and balances,” says Gonul Tol, director of Turkish studies at the Middle East Institute, in Washington, DC. “The majority of the Turkish public is against it.” Another AKP-led government would likely increase tensions with the European Union, Tol says. 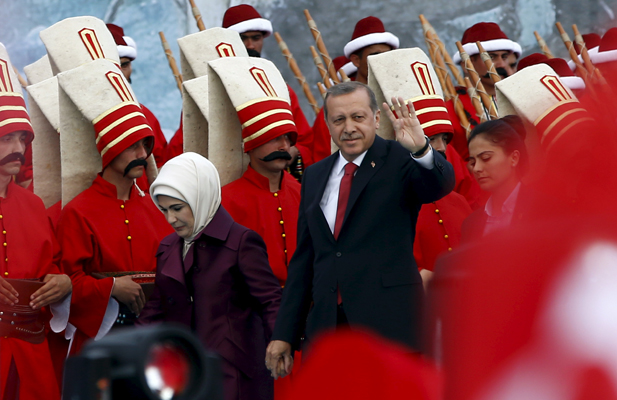 Turkish President Recep Tayyip Erdogan greets his supporters at a ceremony to mark the 562nd anniversary of the conquest of Istanbul by the Ottoman Turks. (Photo: Murad Sezer/Reuters)

What should observers of Sunday’s elections know about the Turkish parliamentary system?

Turkish voters elect 550 deputies from 85 constituencies [electoral districts] to the parliament, Turkey’s unicameral legislature that’s elected every four years. We have proportional representation. The most important feature of the Turkish parliamentary system is its 10 percent electoral threshold, one of the highest in the world. If parties get less than 10 percent, their votes are transferred to the winning party in the losing parties’ constituency.

For example, the pro-Kurdish HDP is strong in Diyarbakir, a Kurdish constituency. If this party gets 9.8 percent nationally, then HDP votes in the Diyarbakir district will go to the [runner-up there], which would be the AKP. If the HDP doesn’t cross the threshold, all those seats will go to the ruling party.

Although we have a parliamentary system, the 1982 constitution granted vast powers to the president. The president can chair national security council and cabinet meetings and exercise parliamentary powers, but is not supposed to interfere in the day-to-day affairs of the government. But Erdogan does. We have a de facto presidential system under Erdogan.

Apart from Erdogan’s ambitions for a presidential system, there has been talk of the need for constitutional reform. How strong are checks and balances on the government?

On paper we have an independent judiciary, but it has never been independent, and since constitutional amendments in 2010, the government has greater control over the judiciary. President Erdogan and the AKP frequently interfere in judicial decisions.

There is little media freedom. There is self-censorship, and those who criticize the government often get fired. The AKP ran a liberal-democratic campaign when it first came to power, in 2002. They carried out important democratic reforms. But after thirteen years they have turned increasingly authoritarian.

If the AKP manages to capture a supermajority of 367 seats [it currently has 311], it will be able to change the constitution unilaterally. That means Erdogan would realize his dream of a presidential system. That does not bode well for Turkish democracy and Turkey’s EU accession process. The presidential system Erdogan has in mind has no checks and balances.

It sounds like the HDP poses the biggest obstacle to an AKP supermajority, and its presidential ambitions. Is this role as power broker new for them?

Many criticized the pro-Kurdish HDP’s decision to run as a party rather than field independent candidates, something it used to do to circumvent the 10 percent threshold. The Kurds think the HDP’s decision to run as a party risks gains with the ongoing peace process and Kurdish role in the fight against the Islamic State. If the HDP cannot make the threshold, they won’t be represented in parliament.

But there’s a bigger concern among liberals: If the HDP doesn’t make it, what is at stake is not just the Kurdish peace process, but Turkish democracy. If the HDP doesn’t make it to the parliament and the opposition parties [center-left] CHP and [ultranationalist] MHP do not increase their votes, the AKP could have a supermajority. But that is unlikely; polls suggest that the opposition parties will increase their votes.

The second-best scenario for the AKP is capturing 330 seats, the threshold to take a constitutional amendment to referendum. That is possible if the HDP fails and the opposition parties only slightly increase their votes. But even then, I think a presidential system is not possible. The majority of the Turkish public is against it.

The HDP’s base is Kurdish, secular, and left leaning. Are they expanding their support this time around?

The HDP did a great job appealing to the liberals and the young people in the CHP who are alienated by their own party, arguing that it has not been an effective opposition. [HDP leader] Selahattin Demirtas has presented his party as the liberal alternative to the AKP. They have lesbians, an Armenian, people from different social and ethnic backgrounds on their list of candidates.

There was a liberal void in Turkey in 2002, and the AKP filled that void. But it has lost that spirit of democratization. Now the HDP is rising up to fill that liberal void and it has captured the hearts and minds of young people concerned about the authoritarian drift of the country.

The challenge for Demirtas has been to balance those two constituencies. In polls, the HDP hovers between 9.8 and 10.3 percent, so it’s right on the line.

A recent MetroPOLL suggests that around 10 percent of the AKP’s constituency votes for pragmatic reasons. This 10 percent is now alienated. They think Erdogan’s heavy hand, divisive arrest warrants, and flippant meddling in the economy are hurting political and economic stability. The HDP could capture some of these votes.

Economic growth had been impressive until slowing two years ago. Will Erdogan and the AKP bear blame for the slowdown at the polls?

Under the AKP, Turkey experienced impressive economic growth, the main reason it could hold onto power for so long. But that growth is now in decline, and part of the problem is a decline in investors’ confidence. The Turkish economy is dependent on foreign investment. Erdogan has recently meddled in decisions of the Turkish central bank, a great concern for foreign investors. That has also hurt Erdogan.

The image of a country that does not respect the rule of law, where the judiciary is not independent, and where Erdogan, who has nontraditional views about finance and is constantly shaping economic policy, dealt a blow to Turkey’s image. That is scaring away foreign investors.

The AKP came to power after the turbulent 1990s, when the country experienced many coalitions, economic crises, and political instability. The AKP could establish stability because, finally, there was a one-party government that could make effective decisions fast. Now that image is shattering, and people are feeling the economic downturn.

You spoke about the resonance of Kobani. In a broader sense, are voters concerned about regional turmoil?

They are. Syria occupies a unique place, not just in Turkey’s Middle East policy, but in Turkey’s domestic policy as well. Turkey’s Kurdish policy has always been vulnerable to Syria’s Kurdish policy. There are historical ties between the Kurdish communities on both sides of the border. There are family ties. They are organically linked.

Now, Syria is even more important because we have two million [Syrian] refugees, and Turkey does not have the legal and institutional infrastructure to handle them. They have become part of Turkey’s social fabric forever. Many people are concerned about the economic, social, and political implications.

Another side of the story is the border towns. [Prior to the civil war] Syrians could go in and out of Turkey frequently. Trade has been hurt. And Syria had been Turkey’s gate to Middle Eastern markets. They lost a lot of money in investments in Syria. Usually people don’t vote on foreign policy, but it might have an influence because the government’s Syria policy has been very unpopular.

Will the composition of the next government affect Turkey’s regional policy?

The most likely outcome is the AKP won’t capture a supermajority but will hold enough seats to form a majority government. In that case, I don’t expect major changes in Turkey’s regional policy. It has embarked on a more aggressive Syrian policy, pushing the United States to establish a no-fly zone and pursue a more forceful policy. But Turkey has mostly given up on the United States. Now it has formed an alliance with Saudi Arabia and Qatar to unify the Islamic Front.

Things could become worse vis-a-vis the European Union. If we have another AKP government, Turkey’s democracy will suffer. Turkey already has a tense relationship with the EU, and in that case, the EU would be even more reluctant to normalize relations. European countries have been vocal in their criticism of Erdogan’s meddling in the judiciary and the lack of freedom of expression.

If the HDP makes it to the parliament and the opposition parties significantly increase their votes, the AKP could be forced into a coalition government. The most likely scenario is an AKP coalition with MHP, the ultranationalist party. In that case, I think the AKP would be forced to be more inclusive and democratic. On the foreign policy front it might be more risk averse, but I don’t see a big change.

But if the AKP forms a coalition with the pro-Kurdish HDP, we can expect a big change in Turkey’s Syria policy. Turkey built its Syria policy on two objectives: toppling the regime and marginalizing the Kurds. They turned a blind eye to radical jihadi groups’ activities within Turkey’s borders, thinking they could be an effective fighting force not only against the Assad regime but against Syrian Kurds. If we see an HDP-AKP coalition, that will change. Turkey might be forced to engage the Kurds and engage less with the radical Islamist groups.