New allegations of U.S. espionage on its German ally have brought bilateral tensions to a "full boil," explains Karen Donfried, former top advisor for Europe at the National Security Council. But she says that Berlin remains a critical partner across a range of issues, including Afghanistan, Syria, and Iran. "I wouldn’t reduce the German-American relationship to the issue of spying," she says. But as both countries look to mend ties, Donfried notes that the dispute over surveillance could remain a stumbling block. 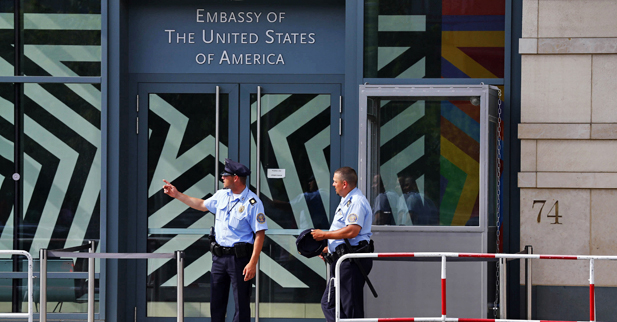 What is the mood in Germany on relations with the Unites States? I saw a recent poll showing that only 38 percent of Germans look favorably on the United States.

There is no question that public attitudes towards the United States among Germans have been soured for over a year now by the spying issues. The first chapter, starting last spring, focused on the National Security Agency’s bulk collection of metadata. President Obama actually visited Berlin last June and spoke about it at length at a press conference in the Chancellery .

The second chapter hit last October with allegations that the United States tapped Chancellor [Angela] Merkel’s cell phone. And President Obama immediately came out and said, "We are not and will not tap her communications," [but did not deny it had occurred in the past].

Now, we are in the third chapter with the allegations about possible U.S. double agents in Germany. So this is an issue that has been with us for over a year, and it clearly has taken a toll on German public attitudes toward the United States.

And this led to the expulsion of the CIA’s top officer in Germany?

Yes, Germany asked the CIA station chief to leave. But it’s important to note that, while this is certainly a very damaging issue in the relationship, we shouldn’t forget what a critical ally Germany is to the United States and that we’re working very closely with Germany on a whole host of other issues.

Secretary of State John Kerry was together last weekend with Foreign Minister [Frank-Walter] Steinmeier in Vienna because of the talks about Iran’s nuclear program. We also work very closely on Afghanistan, on Syria; you can go down the list of issues. So I wouldn’t reduce the German-American relationship to the issue of spying.

And, of course, Germany is the leading economic power on the continent, and the United States would very much like to get this overall trade and investment treaty accomplished. Where do we stand on that?

The United States and the European Union in 2013 launched negotiations to conclude a Trans-Atlantic Trade and Investment Partnership. Germany has been very enthusiastic and supportive of TTIP, but, interestingly, German public attitudes on TTIP have gone quite negative—there has been a bleeding over of the NSA spying issues.

When you look at German attitudes about TTIP, it’s a mix of three things. Part of it is upset with the United States—a spectrum of the German public believes the U.S. is trying to use TTIP to force lower standards on Germany—for instance, to force Germans to eat chlorine-bleached chicken and [genetically modified foods.] There is also an anti-globalization element in the German debate, and also an anti-Brussels attitude. Germans complain that the European Union has not been transparent about the negotiations, and [so all of this] is creating a toxic brew among the German public.

But Obama was so popular when he visited Germany as a candidate in 2008.

When Barack Obama went to Berlin as a candidate, hundreds of thousands of people came out to hear him—there was incredible enthusiasm about the Obama presidency, but that clearly has been tempered over time for many reasons.

First, expectations may simply have been too high. But, secondly, there was disappointment that on some of the issues—such as closing down Guantanamo or the use of drones— Obama’s policy was not as different as what they’d hoped for.

Thirdly, the spying issue over the past year has taken a toll as well. But there are still a lot of Germans who think that Barack Obama captures what is so special about the United States and the opportunity it presents for people from all kinds of different backgrounds.

U.S.-German relations have had these ups and downs. I’m old enough to remember when President Kennedy gave the speech Berlin in 1963, proclaiming "Ich bin ein Berliner," and there was German enthusiasm for the U.S. after the Berlin Wall went up. And then, of course, there was anger that arose later in Germany during the Vietnam War…

There are always ups and downs in any relationship. And, as we’ve seen, when Secretary Kerry and Foreign Minister Steinmeier met together in Vienna, Steinmeier was quoted as saying that the "ties between the United States and Germany are necessary and essential for both of us, and we want to work on reviving the relationship." So there is certainly a commitment on both sides to move past this.

But Angela Merkel also mentioned in a TV interview last Saturday that the U.S. and Germany have fundamentally different views on how to manage spying, so there isn’t a ready mechanism to get us past this.

What is the issue holding up a resolution on the spying?

In January of this year, President Obama had a quite significant review of U.S. policy as it relates to the intelligence community, and gave a speech on the 17th where he announced changes to the metadata collection and talked about extending some of the privacy provisions that apply to Americans to foreign nationals. And, interestingly, on that day, the only television interview he did was on German television, showing the fact that he realized how sensitive this issue was.

Then there was, in late June, a meeting of something called the U.S.-German cyber dialogue, which people thought might be one way of moving forward—talking about the role of technology in the 21st century and what that means for surveillance.

So there have been very serious efforts made on both sides to try to resolve this, but certainly the recent allegations brought the issue to a full boil in the relationship again.

The United States has a special intelligence partnership with some English-speaking countries [the UK, Canada, New Zealand, and Australia]. Is that something Germany would like?

That’s called the "Five Eyes"—as some people have characterized it, a "lets spy together" agreement. But that’s essentially an agreement about intelligence cooperation, not a no-spy agreement.

And it is not at all clear that Germany is interested in joining the Five Eyes arrangement. This has to do with Germany’s own relationship to intelligence, surveillance, and even some legal limits on the role Germany can play in that realm.

The Case for a Significant German Stimulus Is Now Overwhelming

Time for China, Germany, the Netherlands, and Korea to Step Up

The world's surplus countries have the ability to do more to support global growth.