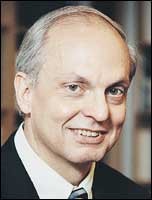 Arthur C. Helton, the director of peace and conflict studies and senior fellow for refugee studies and preventive action at the Council on Foreign Relations, died in the August 19 bombing of the United Nations headquarters in Baghdad, U.S. officials confirmed. He was 54.

A lawyer and human rights activist, Mr. Helton dedicated his professional life to working with refugees and recommending ways to ease their plight. In 1994, he founded and then directed the Forced Migration Projects at the Open Society Institute. For 12 years prior to that, he directed the Refugee Project at the Lawyers Committee for Human Rights. He joined the Council staff in 1999.

Mr. Helton was in Baghdad to assess humanitarian conditions in Iraq. When the bomb exploded at approximately 4:30 p.m. Baghdad time, he is believed to have been in a meeting with U.N. Special Representative for Iraq Sergio Vieira de Mello, who was also killed.

“Arthur was one of our most respected senior fellows and a noted expert on refugee and humanitarian issues and international law,” said Council on Foreign Relations President Richard N. Haass. “He had devoted his life to improving the lives of others, and as part of that goal, was in Iraq to consult with the U.N. to help find ways to relieve human suffering.”

“The world has lost a devoted and talented champion of the rights of the dispossessed,” Haass said.

Over the course of his career, Mr. Helton wrote more than 80 scholarly articles and contributed to several books on refugees and the displaced. Drawing on decades of experience, his 2002 book, The Price of Indifference: Refugees and Humanitarian Action in the New Century, analyzed refugee policy responses in the 1990s and called for specific reforms to make them more proactive and comprehensive. At the time of his death, Mr. Helton was seeking support and funding for an independent policy center to enhance the effectiveness of international humanitarian action.

“Mr. Helton not only asks important questions, but also makes ambitious policy recommendations. His book is a welcome contribution to the debate on humanitarian action, and will undoubtedly help us to manage humanitarian challenges better in the future,” U.N. Secretary General Kofi Annan wrote in a book review.

In addition to his work at the Council on Foreign Relations, Mr. Helton was an adjunct professor at Columbia University Law School. He had taught courses on migration and forced displacement at the New York University School of Law and Central European University in Budapest and had testified on numerous occasions before Congress on the rights of illegal aliens and refugee protection. He became a member of the Council in 1999.

Mr. Helton received the 2002 Award for Distinction in International Law and Affairs of the New York State Bar Association, and in 2001 he was awarded the Immigration and Refugee Policy Award from the Center for Migration Studies. He also received the 1991 Ninoy Aquino Refugee Recognition Award, conferred by the president of the Republic of the Philippines, and the 1987 Public Interest Award conferred by the New York University Law Alumni Association.

He graduated from Columbia College in New York City in 1971 and from New York University Law School in 1976. He is survived by his wife, Jacqueline D. Gilbert, his mother, Marjorie Helton of Florida, and a sister, Pamela H. Krause of Virginia.

The U.S. Intelligence Community’s Harrowing Take on Our Possible Futures

In the next 40 years, institutions at all levels could struggle to adapt to abrupt demographic shifts, economic turbulence, runaway climate change, and technological innovation.

Higher education provides students many socioeconomic benefits and increases the global competitiveness of the United States, but mounting student loan debt has sparked a debate over federal lending policies.

President Biden hopes to show that the United States is ready to be a leader again in combating climate change.