At a time of upheaval in the Middle East, Iran’s ambitions as a regional power and its ongoing nuclear program constitute major challenges to its neighbors and the global community. "Crisis Guide: Iran," the Council on Foreign Relations’ (CFR) latest multimedia feature in its Emmy award-winning series, uses interactive timelines, bubble maps, graphs, and images to trace Iran’s history, examine its oil-driven economy, and survey its nuclear program.

Its seven chapters include video interviews with more than twenty-five leading analysts, journalists, and Iranians such as Nobel laureate Shirin Ebadi. In its concluding chapter, top experts offer policy choices for managing the risks posed by the Iranian regime:

–   Journalist Robin Wright, and scholar Reza Aslan, on the future of the U.S.- Iran diplomatic relationship;

–  Suzanne Maloney of the Brookings Institution and Trita Parsi of the National Iranian American Council on ways international actors can support domestic opposition to the regime;

–  Former U.S. diplomat James Dobbins and Hadi Ghaemi of the International Campaign for Human Rights in Iran on public diplomacy’s role in encouraging Iranian citizens to promote change from within. 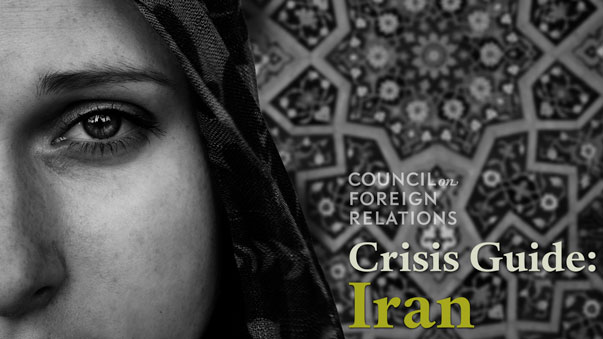 "Conveying the full scale of the crisis around Iran is complicated and with this guide we are providing a range of interactive tools to give audiences clear reference points," says CFR.org Editor Robert McMahon. "The expert videos provide the crucial narrative."

This publication was made possible by the Carnegie Corporation of New York. The statements made and views expressed are solely the responsibility of the authors.