Beset by devastating floods, increased terror attacks, and political instability, Pakistan’s precarious state is a matter of global concern. “Crisis Guide: Pakistan,” the Council on Foreign Relations’ (CFR) new interactive multimedia feature, examines the roots of the country’s challenges: an increasing number of terrorist groups; a growing nuclear arsenal that could become vulnerable to these groups; a long-standing rivalry with India and troubled border with conflict-ridden Afghanistan; and the ongoing power struggle between a strong military and a weak civilian government. The guide draws on expert analysis to demonstrate what these problems mean for the region and the world, and to explore potential directions for the country. 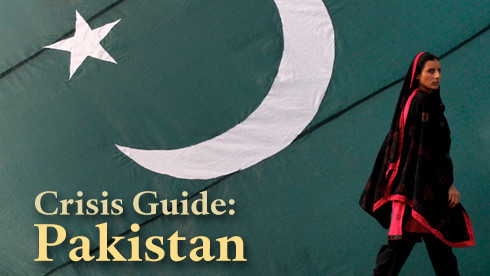 The interactive presentation includes video interviews with more than twenty-five leading analysts, government officials, and journalists from Pakistan, India, and the United States. They include:

The guide’s six chapters include:

—a cinematic overview of Pakistan’s challenges;

—interactive timelines exploring the country’s history, its contentious civil-military relations, and its tumultuous ties with the United States;

—an  interactive map surveying Pakistan’s troubled relations with its neighbors; and

—an expert review of the five most-discussed scenarios for Pakistan’s future—state collapse, the rise of radical Islamist ideologies, a return to authoritarian rule, a moderate state, or a scenario in which Pakistan muddles along without major institutional reforms.

What to Watch for at the Biden-Putin Summit

U.S.-Russia bilateral relations have fallen to a new low, with Ukraine, Belarus, cyberattacks, and nuclear weapons among the biggest disagreements. What’s the best way to judge this summit’s success?

In Brief by Stephen Sestanovich June 8, 2021

The U.S. government is responding to another wave of migrants fleeing poverty, violence, and other challenges in the Central American region.

Illegal Fishing Is a Global Threat. Here’s How to Combat It.

Fishing provides a critical source of food and income for many countries, but much of it occurs unlawfully, harming vulnerable populations and eroding maritime governance.