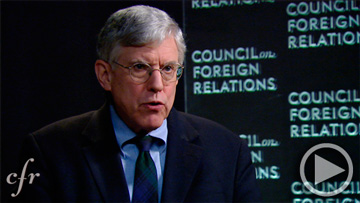 “Governance, let alone democracy, faces grievous, structural challenges in Nigeria,” says Council on Foreign Relations (CFR) Senior Fellow and Former Ambassador to Nigeria John Campbell in his new book Nigeria: Dancing on the Brink. “Popular alienation and a fragmented establishment have contributed to Nigeria becoming one of the most religious and, at the same time, one of the most violent countries in the world.”

The book offers a history of Nigeria from colonialism through independence to the flawed elections in 2007, which undermined the credibility of the current government and left Nigeria’s conflicts unresolved. “Ubiquitous patronage and corrupt behavior fueled by oil money is a root cause of Nigeria’s political and economic sclerosis,” explains Campbell. “The federal government has failed to provide basic security for its citizens and has lost its monopoly on violence, two basic attributes of a sovereign state.”

Despite the challenges, Campbell argues that Nigeria, Africa’s most populous country, is important to the United States and the international community. He points to a history of shared interests, including efforts to promote African regional stability and conflict resolution, economic cooperation in the region’s petroleum resources, and tackling public health challenges, especially HIV/AIDS and malaria.

“Though the international community would pay a steep price for Nigerian state failure and the likely humanitarian calamity,” Campbell acknowledges that “it can do little except at the margins to prevent it.” He argues that state failure is not inevitable, but change must come from inside Nigeria. He encourages the Obama administration to “assist those in Nigeria working to establish a democratic culture,” in hope that a complete collapse of the state can be forestalled.

He calls on the United States to employ a strategy of “soft diplomacy,” which includes “facilitating more exchanges and providing more grants to those actively working to create a democratic culture.” He encourages U.S. support of the National Assembly, the court system, and carefully vetted state governments that are practicing good governance through targeted assistance programs.

Campbell urges the Obama administration to seek greater ties with Nigerian civil society, while warning of the possible negative political consequences if the United States is viewed as too supportive of the Abuja government. “The people of Nigeria distance themselves from government as much as they can. There is the risk that many of them will distance themselves from the United States if they perceive Washington to be an uncritical supporter of the Abuja status quo.” He maintains that “the Obama administration should take into greater account what the Nigerian government is doing domestically before embracing Abuja too warmly.”

Advance Praise for Nigeria: Dancing on the Brink:

"This lucidly written book will appeal to scholars, policymakers, and general readers. John Campbell explores key political, economic, and social issues and frankly evaluates U.S. policies in helping or inhibiting the building of a stable, democratic, and less corrupt Nigeria. It is essential reading for all concerned about the unfulfilled potential, and uncertain future, of this complex nation."

"A fascinating work. In its coverage of contemporary Nigeria, above all what Ambassador Campbell learned in his Abuja assignment, it is a lucid and valuable contribution. Campbell writes with unusual candor, and with his initial academic training as a historian, he brings analytical discipline to his writing. This is much more than a mere memoir."

John Campbell is the Ralph Bunche senior fellow for Africa policy studies at the Council on Foreign Relations in New York. He served twice in Nigeria, from 1988-90 as political counselor and from 2004-2007 as U.S. ambassador.

The Council on Foreign Relations is an independent, nonpartisan membership organization, think tank, and publisher dedicated to being a resource for its members, government officials, business executives, journalists, educators and students, civic and religious leaders, and other interested citizens in order to help them better understand the world and the foreign policy choices facing the United States and other countries. Since 1922, CFR has also published Foreign Affairs, the leading journal on international affairs and U.S. foreign policy. CFR takes no institutional positions on matters of policy.

Women in the Nigerian Delta Resist Election Violence and Rigging