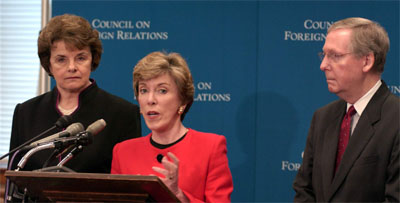 WASHINGTON, June 18 - The United States must urge the UN Security Council to hold an emergency session on Burma to condemn the military governments recent crackdown on the democratic opposition there, concludes the newly released Council-sponsored Independent Task Force, Burma: A Time For Change.

In that session, the Security Council should impose targeted sanctions on Burma, including denying visas to leaders of the military regime, freezing their assets, banning new investments and the import of Burmese goods. The Task Force also strongly recommends that the United States adopt an immediate import ban on goods produced in Burmaeven if there is no UN Security Council resolution to that effect. At the same time, the United States should increase humanitarian assistance to Burma to help mitigate that countrys massive refugee crisis and public health emergencies, particularly the HIV/AIDS epidemic. This report will trigger the first serious debate in years about what America believes it stands for in Burma and around the world, said Council President Leslie H. Gelb.

Burma is one of the most tightly controlled dictatorships in the world. For over four decades, Burmas 50 million people have been oppressed by military rulers that have systematically impoverished the countrys natural and human resources. In recent weeks, the Burmese military regime aggressively moved to wipe out the already fragile democratic opposition.

The Task Force, led by Mathea Falco, president of Drug Strategies and former assistant secretary of state for international narcotics matters, also makes recommendations for U.S. policy toward Burma in the areas of human rights, democracy and the rule of law; humanitarian assistance, particularly HIV/AIDS; narcotics control; and refugees. The Burmese regime has repeatedly broken its promises to begin substantive dialogue with the democratic opposition, said Falco, It is time for the UN and the international community to take action.

Among the Task Forces recommendations, the United States should:

Established in 1921, the Council on Foreign Relations is a nonpartisan membership organization, publisher, and think tank, dedicated to increasing Americas understanding of the world and contributing ideas to U.S. foreign policy. The Council accomplishes this mainly by promoting constructive debates, clarifying world issues, producing reports, and publishing Foreign Affairs, the leading journal on global issues.

Full text of the Council-sponsored Independent Task Force, Burma: A Time for Change.

DAVID I. STEINBERG
Director of Asian Studies, Georgetown University
Author of Burma: The State of Myanmar (2001)

MORTON I. ABRAMOWITZ
The Century Foundation

The Continued Power of Militaries in an Increasingly Autocratic World

What Happens if Rohingya Stay in Bangladesh Forever?